Donna Davies: One of our 2016 Local Heroes

A consummate editor, Donna Davies wasn’t content to guess at the meaning of “badass”; she looked it up online. Badass – very cool, excellent, awesome, she discovered. “Who knew?!” she laughs. It turns out that Donna’s grandchildren, who all attend university, promise they’ll inscribe “Badass Grandma” on her gravestone when the time comes. 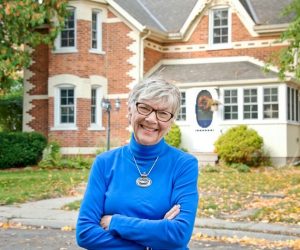 But by all measures that won’t happen anytime soon. As vibrant as ever in retirement, Donna was too busy this year to play as much golf as she would have liked. “I don’t spend all of my time on history and genealogy,” she says, “but you might think I do.”

If family – husband Chuck, four children and four grandchildren – are Donna’s first love, history and genealogy are her grand, and time-consuming, passions. This means Caledon East, the village where she lives in a designated heritage house, is very lucky indeed. Of the seven books on local history Donna has edited or helped to edit since she retired, several celebrate her adopted home. But Settling the Hills: Historical Reflections – Caledon East and District, which was published in 2000, stands out for her. “Each chapter was written by someone different, so it has 14 authors,” she explains.

As anyone who has edited a book knows, working with even two authors on the same project can be challenging, as it’s unlikely everyone has the same vision of the final product. But Donna didn’t just pull it off, she was the driving force behind a book much loved by the community and its authors. For Donna, this book and her successful nomination this year of her longtime friend (and In the Hills columnist) Ken Weber to Caledon’s Walk of Fame are two of her major achievements.

We’re sitting in her home office, where the slender, immaculately turned out, pearl-necklace-and-all Donna does much of her work. She’s president of the Caledon East and District Historical Society – and she has come to realize the position may be permanent. “I’ve tried to find a successor but it isn’t working,” she says. Donna has been or is involved with Heritage Caledon, the Caledon Heritage Foundation, the Ontario Historical Society, Caledon/Dufferin Victim Services, Caledon Meals on Wheels, the Ontario Trillium Foundation and St. James Anglican Church in Caledon East. She received an Ontario Heritage Award for Settling the Hills, and until she retired in 1997, she worked full-time as administrative assistant to the CEO of a health services company. And if that isn’t enough, she plays bridge and golf, and loves to read, garden and travel. But there’s more. In her spare time Donna searches family trees for her friends.

“When I came to Caledon East [from Toronto], I didn’t know a concession from a sideroad,” she admits. But she learned all that and more as she helped authors research, design and organize their books. Moreover, she became an integral part of the community.

“Donna has an uncanny ability to look ahead for what needs to be done, and then she does it with efficiency and charm,” says Ken Weber of his friend. “Quite simply, she makes the world a better place.” High praise for a Badass Grandma.

After selling out, Settling the Hills: Historical Reflections – Caledon East and District, co-ordinated by Donna Davies, was reprinted this year.
Where to order a copy: http://www.cedhs.ca/books-published.html

Freelance writer Nicola Ross lives in Alton and is the author of the bestselling 'Loops and Lattes' hiking guide series.
Show 4 Comments