A Dose of Music, a Spiritual Tonic

At 61, Lorraine McNally nabbed Grade 1 gold at the Royal Conservatory

When I come home, the first thing I do is turn on some music. Usually light classical or easy listening. Music is a constant in my life. It calms me; it connects me to the moment and it has the power to dramatically change my mood.

As a consequence, I have always had a good deal of respect for those who master, or even attempt to master, a musical instrument.

Twenty years ago, while she was recovering from a stem cell transplant, Lorraine’s husband, Dan O’Connell, bought her a guitar at an auction. That was the beginning of an intricate and lasting love affair with the stringed instrument.

Now 63 and living in Adjala, Lorraine speaks thoughtfully about her musical journey. “Yes, there have been stumbling blocks, but I’ve learned that you just keep pushing forward,” she says. “And of course, you get out of it what you put into it.”

She considers her music a relaxing hobby and works at keeping practice sessions pressure-free. She has no illusions about ever playing at Carnegie Hall; rather, she plays her music for herself.

“My music takes me out of myself. It’s a distraction and settles my mind, returning many of the same benefits as meditation.” Through music she feels a deeper connection with humanity. “I believe that music is a universal language that everyone can relate to,” she says.

In 2014, when Lorraine was 61 and had progressed musically to the end of Grade 1, she sat the Royal Conservatory’s rigorous examination – and won the gold medal as the top Grade 1 guitar student in Ontario.

The experience tickled her sense of humour. “For instance, the conservatory sent an email asking for my parents’ consent to perform at the ceremony,” she laughs. “Most of the other competitors were younger children, but there were some other older students as well.”

She has since graduated from Grade 2 with first-class honours and is currently working on Grade 3.

Music wasn’t part of her life when she was growing up, so Lorraine credits her friend and music teacher Daniel LaBrash with fostering her love of music. She started from scratch, learning both theory and how to read music. “I now have a much greater appreciation of what goes into playing any musical instrument,” she says. “And I often find myself in awe of the skill required to perform it.”

Daniel has encouraged Lorraine to progress at her own pace, and at each lesson he offers enough challenge to stimulate her but not so much that she is stymied.

As for Daniel, music has always been central to his life. Now 57, he trained as a young man to become a professional musician, studying classical and flamenco guitar. In his early 20s, he was performing at community events and in local restaurants. For five years in the late 1980s, for example, he was a weekend fixture at Al’s Family Restaurant in Orangeville.

But, says Daniel, his musical career has gone through phases. “While I enjoy studying, writing and performing music, at the moment I seem to be focused more on teaching.”

As an adjunct to teaching, Daniel also builds guitars. In his charming and spotlessly clean shop-cum-studio in Hockley Valley, Daniel took me through the stages of the guitar he was building at the time – for Lorraine, it turns out.

He used East Indian rosewood for the back and sides of the instrument, spruce for the top and ebony for the fret board, while the neck is mahogany. Each wood was chosen with a view to giving the instrument its unique, and best, sound.

Daniel finishes his guitars with an old-fashioned French polish, not only for the different tone it produces, but also because it’s nontoxic. The finish on Lorraine’s guitar took about 30 hours alone to complete.

Guitar building is a part-time activity for Daniel. “The extreme precision required as a luthier can either be meditative and relaxing or extremely frustrating,” he says. “It takes about 250 hours to produce a handmade guitar, so obviously I want to enjoy the time I spend at it.” 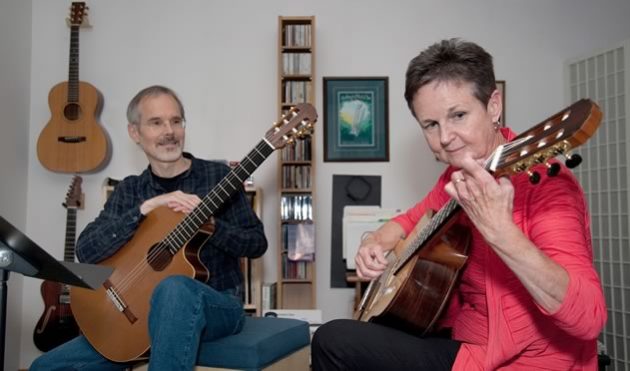 As for Lorraine, she is delighted with her new instrument, though she is having some trouble getting used to playing it. “It’s a little like a racehorse that needs to be fine-tuned,” she says.

But always, the main thing is the music.

According to the experts, music lessons, and even simply listening to music, can enhance your spatial reasoning, a critical higher brain function necessary to perform complex tasks.

Okay, but for me, music is a spirit lifter. Both soothing and emotive, it works its way from the top of my head down to the tips of my toes, and breathes new energy into every fibre of my body.

“If you pour some music on whatever’s wrong, it’ll sure help out,” said the late musician Levon Helm.