Many would call it a dream job. Ken Withers, 88, and now living just north of Bolton, travelled the world with the likes of Peter O’Toole and Omar Sharif – and was paid to do it. 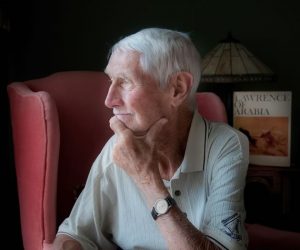 Born in Belgium, Ken grew up in England. His first job, in the early 1940s, was with Gainsborough Pictures, where he started at the bottom to learn the skills required to work behind the camera. A “clapper boy” at first, he moved on to become a “focus puller,” one of the most difficult jobs in the business.

After completing his mandatory British military service, Ken returned to the film industry and remained with it until retirement.

He spent a total of 21 months filming Lawrence of Arabia, including six months living in tents in the desert near Jordan. The rest of the time, he worked on location in Spain, Morocco and London.

His work on Lord Jim took him to Hong Kong and Cambodia, Doctor Zhivago to Spain and Finland, Funny Face to Paris, and the James Bond classic You Only Live Twice to Japan and London.

With Myra, his wife of now 61 years, Ken moved to Canada when the British film industry was in one of its periodic lulls and the Canadian industry was thriving. He continued to freelance here until well into his 70s.

“It was a challenging career, but one I look back on with a great deal of satisfaction,” he says.

If you know an elder who should be profiled, please send your suggestion to [email protected]