A Wedding in Winter White 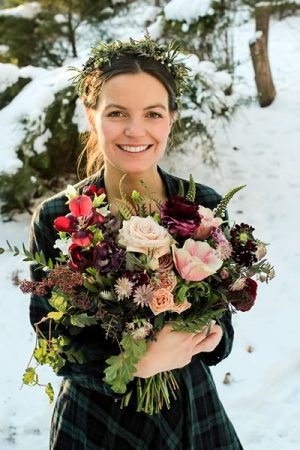 When Laura Wiesen and Xel Campbell became engaged last Christmas, they were led by their mutual love of the outdoors in planning the festivities. Not just any outdoors, mind you. They opted for a winter wedding of the -20 degree, mid-February variety.

“I feel the most at peace outside. I wanted a wedding in the forest,” says Laura, “with just our closest friends and family.”

It was Valentine’s Day, after all, and the couple figured they and their guests would stay warm enough during the short 3 p.m. ceremony outside. And if not? Steaming bowls of homemade stews would be waiting for them when they came inside.

Given their history, those stews happened to represent a lot more than a smart menu choice for a chilly day. Laura met Xel when he came to work as a chef in Pia’s On Broadway, the Orangeville restaurant owned by Laura’s mother Pia Wiesen. The couple started their romance in 2009, and after a stint in Toronto moved back to Mono in 2012 to raise a family – their children, Owynne and Kipp, are one and three – and to take over the space from Pia. Xel runs the kitchen and Laura juggles managing the restaurant and finishing a PhD in international relations.

The wedding took place at Laura’s parents’ farm in Adjala. But with indoor space at a premium and 48 guests, Pia and Xel devised a menu around hearty food that could be eaten while standing. “We thought, ‘Let’s do stews with bowls and spoons,’” Pia recalls as we sit in the family restaurant. “I volunteered to cook. Thank god I have a son-in-law who is a chef,  since he had more pots!”

There were two options: a boeuf bourguignon (the recipe is in Pia’s cookbook My Three Little Lands) and a vegetable-heavy stew. The spread included heaping piles of fresh buns, charcuterie and cheese. The bar was simple too, with just Prosecco, beer, wine and scotch.

The one-course meal left room for a showstopping finale: a wedding cake made from a family recipe handed down from Laura’s great-grandmother, who cooked for the prime minister of Luxembourg in her day. The three-tier torte (see recipe) was topped with a decadent French buttercream flavoured with espresso.

Pia used fancy organic whey butter for the buttercream frosting, which should have made for a beautiful, silky consistency. Unfortunately no one got to taste that batch because it curdled in the fridge overnight! The lesson: If you’re going the DIY route, be ready for last-minute curveballs at 6 a.m. on the wedding day.

“I took a deep breath, had a coffee, put on my boots and fed my horses. Then I drove to the 24-hour Foodland in Caledon East for regular butter,” she says, mimicking the pick-yourself-up moment. Crisis averted.

Other sweets included shortbread by Orangeville’s Wicked Shortbread and raw vegan mini-cupcakes from Liz Gallagher of Toronto’s Unbaked Cake Co. (Laura says she was vegan for a long time and it was important to her to include some meat- and dairy-free items.) 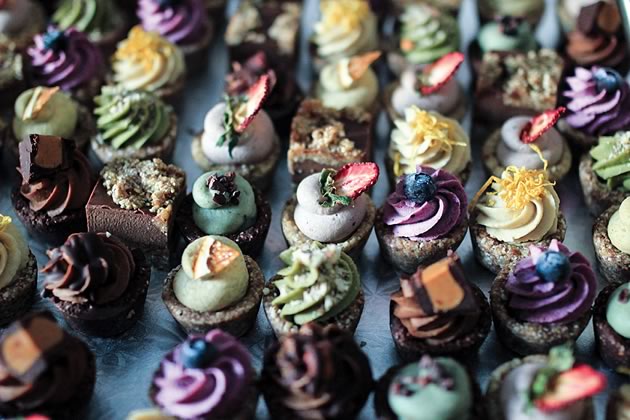 The low-key, thoughtful vibe extended beyond the edibles to other aesthetic elements. An over-the-top princess wedding was clearly not in the cards. Laura and Xel’s lunch-centric restaurant, for instance, is all crisp white walls, exposed brick and well-worn rustic wood tables and chairs. The couple was adamant about throwing a wedding the way they do business and shop every day – sourcing local, indie and artisanal wherever possible. Consider their approach the very antithesis of buying into the wedding-industrial complex, a term popularized by people such as Rebecca Mead, author of One Perfect Day: The Selling of the American Wedding.

“You don’t have to go far for the authenticity you crave,” says Laura.

Laura’s rose gold vine wedding ring came from the Alton Mill’s Gallery Gemma and her conflict-free diamond engagement ring in white gold was sourced from online artisanal retailer Etsy. For her “gown,” Laura says she was thrilled to find a long-sleeved Campbell tartan dress from Anthropologie. “I thought, ‘I’m becoming a Campbell, so this is perfect.’”

An indulgence was a chic, cozy sweater shawl made by Orangeville Etsy seller and friend Kristin Evensen, who used a pattern from of-the-moment site Brooklyn Tweed and organic yarn from Spain. “I splurged on that. She made it for me in a month.”

For flowers, Caledon-raised Toronto florist Amira Shabason of Coriander Girl added a verdant vibe to the festivities with two charming creations. She made a Narnia-worthy crown of sea holly, waxflower and eucalyptus parvi, tied with a piece of twine in Laura’s bohemian updo (by Alton salon Felix & Ginger).

It turned out springing a short-notice February wedding on folks meant, “Everybody was available to come. In the summer people don’t have time,” says Pia. Ontario’s Family Day holiday Monday also happened to land on that weekend, which left a day to unwind and for visitors to travel home.

That night the dancing started at 6 p.m. and didn’t stop until midnight. On top of taking the atmospheric candid photos shown on these pages, Laura’s sister Anna Wiesen and her boyfriend Bobby Kimberley deejayed. “It really felt like a celebration,” Anna recalls.

When she thinks back to the day she married Xel, Laura says it went just as she’d hoped. (Not surprisingly, their wedding gifts were mostly new camping gear.)

“The sun was shining. It felt so peaceful,” she says. 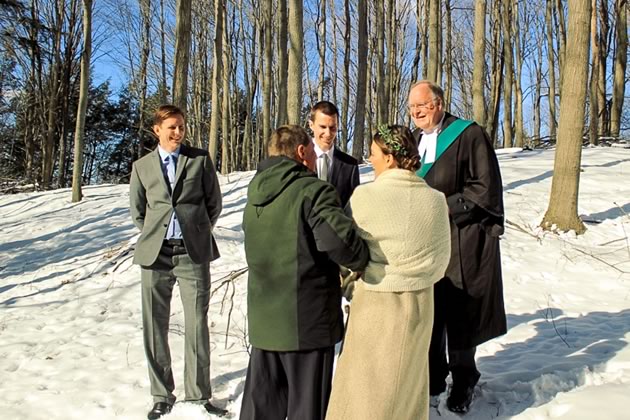 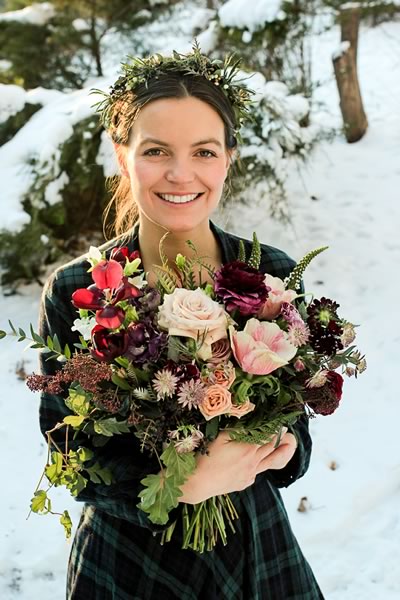 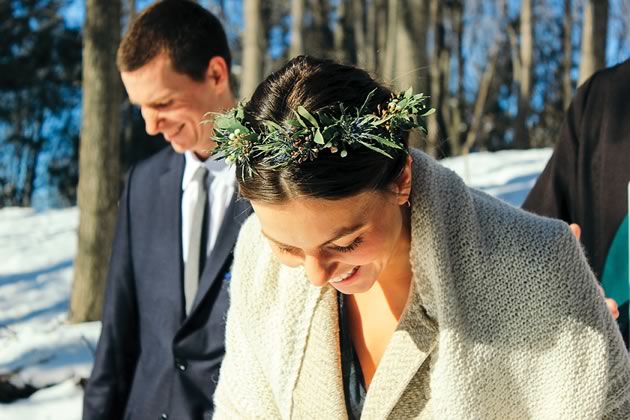 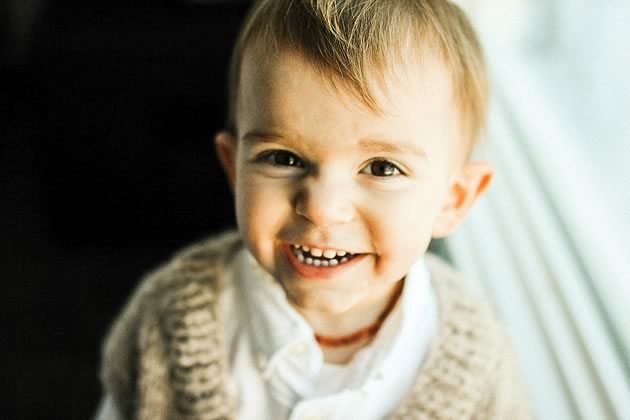 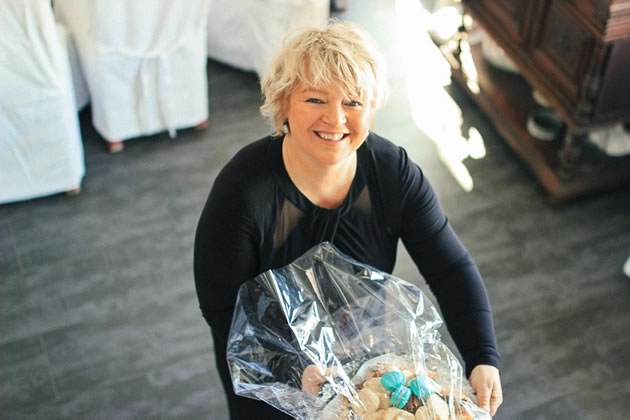 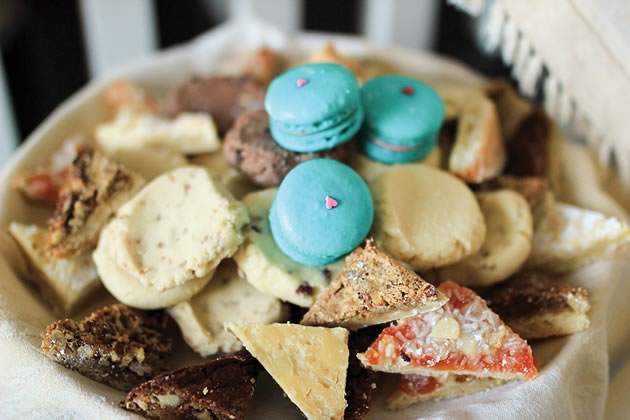 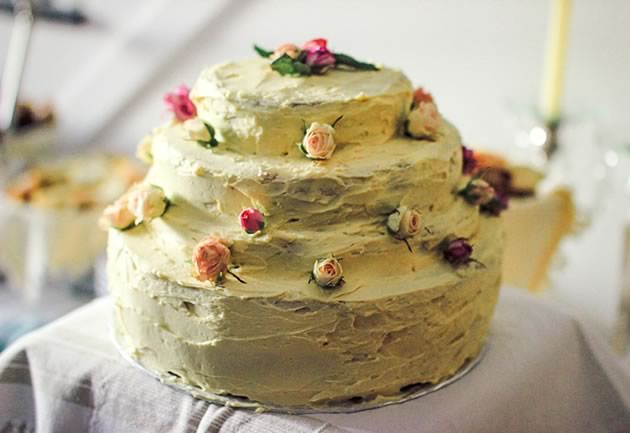 <
►
>
Buttercream Torte This is a two-layer version of the wedding cake Pia Wiesen made from an old family recipe for her daughter Laura Wiesen and son-in-law Xel Campbell. Photo by Anna Wiesen. 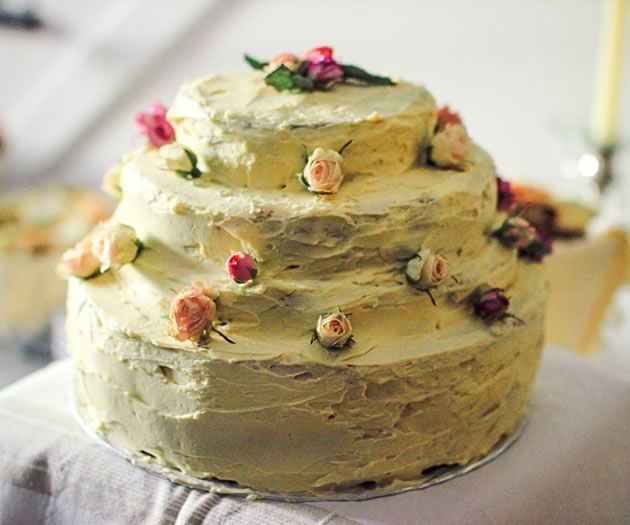 Fancy enough for a wedding, this cake is a showstopping finale to any meal.