Cooking with Paul J. Dickson of The Black Wolf Smokehouse

There’s virtually no food Paul won’t give the smoker treatment – mussels smoked in their shells and smoked beets are two recent successes.

Thanks to chef Paul J. Dickson, though, lighter fare such as salads and fish have elbowed their way into the party. That many ingredients pass through the tall, stainless steel smoker in the kitchen is a given, since it’s one of Paul’s favourite tools to tinker with. 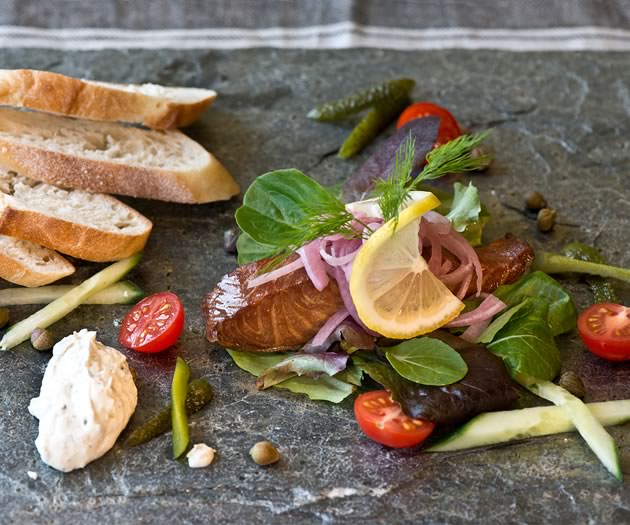 Cured and smoked salmon. Paul’s salmon is a different beast, a chunk of fish that flakes as though it’s been cooked, but with a sweet, salty bite. Photo by Pete Paterson. Styling Jane Fellowes.

There’s virtually no food Paul won’t give the smoker treatment – mussels smoked in their shells and smoked beets are two recent successes. This is how a 28-year-old chef with ideas to burn likes to spend his time.

“I like a bit of a challenge,” he says. “I stick to it and find my own ways of cooking.”

Born in Etobicoke and raised mostly in Hockley Valley, Paul says cooking – and his dad’s skill at barbecue – was central to family life. He says he’s found another extended family in the local food scene, counting fellow chefs and caterers as friends more than competitors. He’s keen to use area suppliers such as butcher Bernie Jackson and Dave’s Butcher Shop. After the Orangeville Farmers’ Market gears up each spring, he makes time to swing through the stands every Saturday as he plans the day’s menu – and finds more fodder for his smoker.

On a recent visit to the Smokehouse kitchen, I find Paul eager to show off what he’s learned about curing and smoking salmon fillets. Put aside what you know about the silky slices you find in the freezer aisle. Paul’s salmon is a different beast, a chunk of fish that flakes as though it’s been cooked, but with a sweet, salty bite.

The fillets appear on the menu as an update to a smoked salmon appetizer and topping a meal-sized salad. As we were chatting, three salads with a bright red fillet perched on top were being run out to a table. (For drinks to match, Paul says he’d pair with either an equally bold Caesar or crisp gin and tonic.)

After 24 hours in the fridge, the salt and sugar cure draws moisture from the fish and forms a gooey glaze. It seems a shame to rinse it off, but rinse you must, then let the now bright red fish air dry before smoking it at 200°F. After it cools, it’s ready to serve.

Chef Paul seems to slow down at this stage, bending over his creation, moving accoutrements millimetres to the left and right to get the visual balance just so. During his training at Georgian College and the University of Guelph, food styling was a favourite subject and it shows.

As Paul plates one of the freshly smoked pieces of salmon with caper cream cheese, pickled red onions, gherkins and lemon, he works as if creating a miniature sculpture on the plate.

“I love cooking and I look at food as art,” he says. 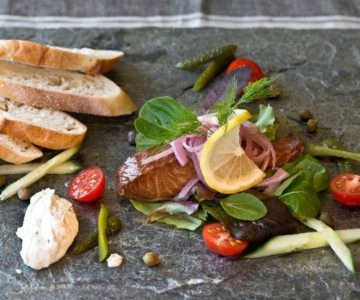 Paul’s salmon is a different beast, a chunk of fish that flakes as though it’s been cooked, but with a sweet, salty bite.