To simplify life at work and home, this Orangeville couple created the ideal urban loft.

This story is about living above a store, a common practice in the late 19th and early 20th centuries when shopkeepers and their families often made their home in the building that housed their business. Though the practice is no longer common, for 21st-century couple Kathleen Henning and Jeff Brown, who wanted to simplify their lives while living well, reviving the old custom made perfect sense.

The three-storey building in Orangeville which now houses Henning Salon – and the Henning-Brown home – was built for Mary Ketchum in 1875-76 as part of the complex known as the Ketchum Block on the north side of Broadway. Mary was the widow of Jesse Ketchum Jr., one of the town’s early movers and shakers, and the main floor of the building may have started life as a general store.

Records show the building changed hands in 1907 when it was purchased by Robert Henry Robinson, who proudly inlaid his name in the cement step at the front entrance. Robinson and his partner Robert Allen operated a grocery store on the premises. Perhaps it was during their time that a large coffee grinder sat in the front window. When the grinder’s huge wheel was activated, delicious coffee aromas famously wafted along Broadway.

The building’s longest-term tenant was Moote & Hodgson, an appliance business that sold a wide range of electrical items. That business remained in the building until Kathleen rented the space 11 years ago for her hair salon. 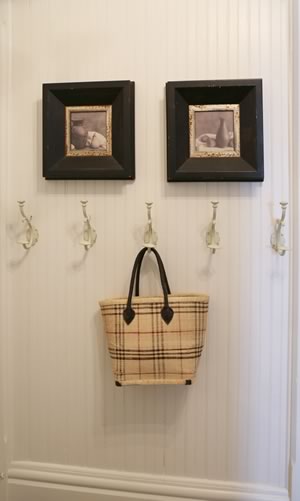 Tongue and groove panels, vintage coat hooks and original baseboards in the small foyer are reminders of the building’s past. Photo by Pam Purves.

She had operated her studio on Zina Street for several years before she and Jeff, who now manages the business end of the operation, decided to move the salon to the ground floor of the 19th-century building. The high ceilings, original wood floors and period detail made for a warm atmosphere and the ample space offered plenty of room for chairs and product displays.

At the time, another business occupied the second floor, and there were – and still are – two apartments on the third floor. Kathleen and Jeff started to think about the space immediately over their heads and how it might change their lifestyle. So after renting the main floor for a year, they approached the owner and inquired about buying the building with a view to creating a home on the second floor. The owner agreed, a deal was struck, and they immediately wondered, “Yikes! What have we gotten ourselves into?”

It was a dramatic experiment. They sold their house and considered how to reconfigure their new living space, which was made up of dark cubbyholes most recently used as offices. Walls came down. The original pine floors started to take on a starring role. The 1,300 square feet began to feel spacious. In the process some period detail was sacrificed, but in exchange the couple created a 13-foot-high, light-filled open space that stretched the considerable length of the building. They knew right away that they had done the right thing.

The two now occupy a modern loft with lots of character. The centre section contains the dining, kitchen and living areas. The whole space is painted white, but each area is well-defined to produce a visual separation while maintaining the sense of expansiveness.

The loft’s two bedrooms face south onto Broadway. A mistake? Not for Kathleen and Jeff. Traffic noise quickly became white noise, and because the street’s many restaurants are serviced from a back lane, the couple’s sleep isn’t disturbed. Curtains are drawn across the French doors of the bedrooms at night and opened during the day when these doors and their original glass transoms allow sunlight to stream the length of the loft.

A dining area between the bedrooms and kitchen is accented with darker colours and lower light, making it an intimate space for dinners with family and friends. A Georgian-style hutch-buffet built into the wall in the 1870s was retained with its original finish and hardware, an elegant reminder of the building’s history.

The living area is largely defined by a sectional sofa that meets the kitchen cupboards at a right angle, effectively forming a transition between the two spaces. Purchased at Orangeville Furniture, the sofa is white, reinforcing the open feel. Kathleen decided to invest in a few expensive decorative pieces from Elte in Toronto, including throw cushions and a rug that add rich colour and texture. But she also found two interesting tables, one glass and one reclaimed wood, at Pear Home, all but next door on Broadway.

At the north end, the rear brick wall was torn down and replaced with three dramatic room-wide steps that rise to a den-sunroom and a wall of windows. The ceiling height in the sunroom is reduced, but that only serves to make it feel intimate even though it is completely open to the rest of the loft. That openness in turn makes it usable space for larger gatherings. A clever trick. 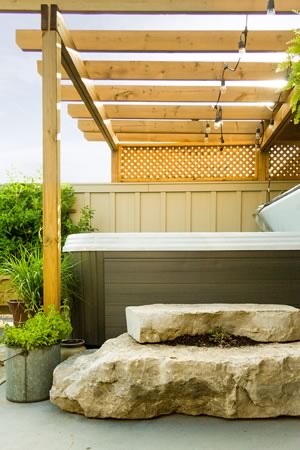 The hot tub and its natural rock steps were lifted by crane to the second-storey roof garden. Photo by Erin Fitzgibbon.

Six years after Kathleen and Jeff moved into their loft, they tackled the kitchen. Having lived all that time with a small temporary cooking area, they were more than ready to plan and build a custom kitchen. They wanted modern simplicity, a space where things could easily be tidied away and just as easily reached. But they also wanted a kitchen that looked attractive and welcoming. The long galley-style kitchen and companion island that resulted is situated in the middle of the loft, making it the heart of the home and the first thing visitors see when they come in.

Across from the island one of the small original rooms makes a good-sized pantry. Its slight protrusion into the otherwise long, straight walls adds an interesting design note. The original paned door conceals cans and bags and the business stuff of the kitchen. Another original space was retained to provide storage for cleaning tools. The kitchen, like the rest of the home, has been a resounding success. Kathleen is the chief cook, but the kitchen works well with two people in it. The island has become the place the pair meet at the end of the workday to catch up on other things and enjoy a glass of wine – at least it is in the cold months.

When the weather is warm, they now convene on the new roof garden they installed off the sunroom. It is a 20-foot-square masterpiece of efficiency and beauty. Huge beams were lifted by crane to the second floor. Cement was poured for the floor and a flame-resistant material – Hardie board – was laid in planks. Then a hot tub was lifted into place, along with two enormous boulders that act as steps to the tub. A comfortable lounging area includes a gas fireplace that extends the sitting season.

Built-in raised growing beds are home to some perennials, but mostly fruit and vegetables. Each harvest of lettuce, tomatoes, peppers, celery, herbs, strawberries and kale goes directly to the kitchen island for cooking prep.

This old and substantial building has been many things in its time – but it has come full circle, once again serving as a business and home. Kathleen and Jeff love the convenience. Though their private and work spaces are well separated, they are readily accessible to each other, and restaurants and shops are just steps away. Once perhaps dubbed the shopkeeper’s quarters, this space has been refashioned for modern sensibilities as the ideal urban loft. 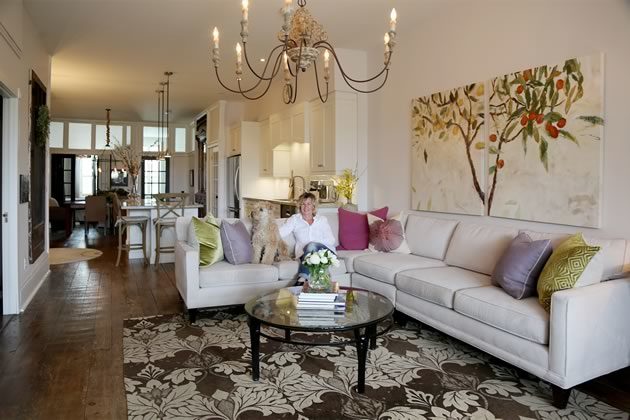 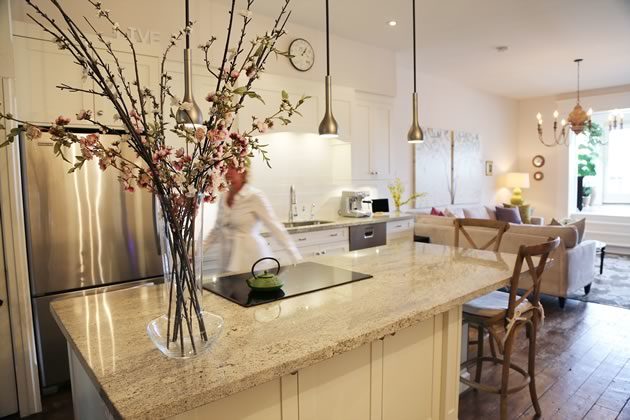 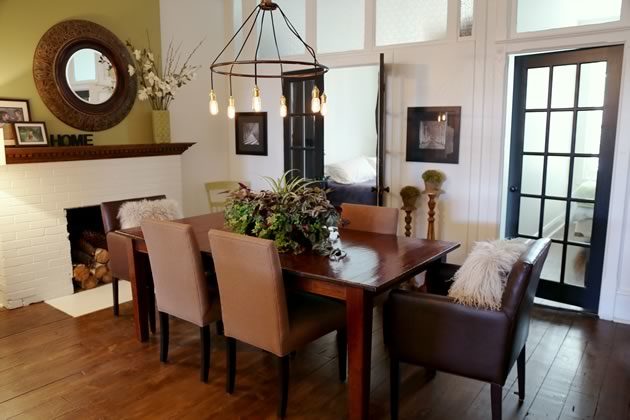 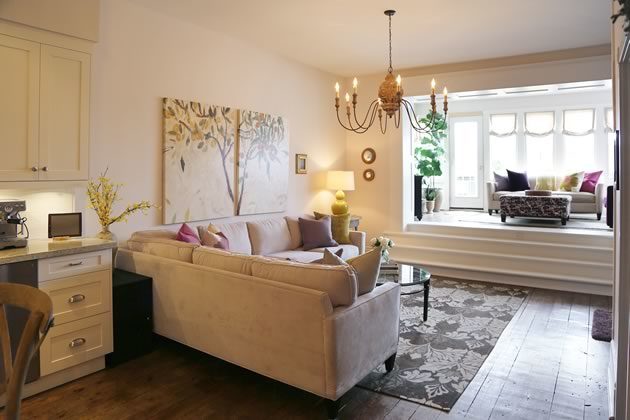 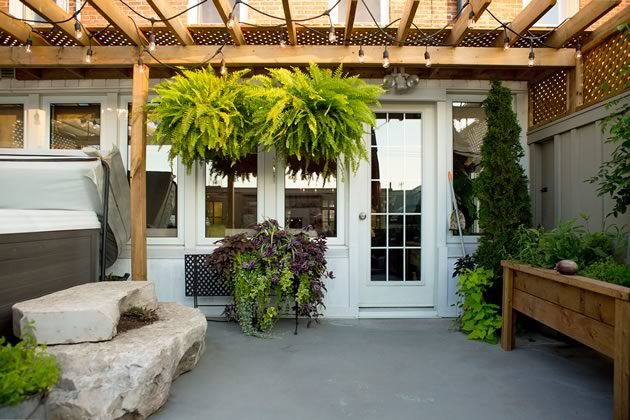 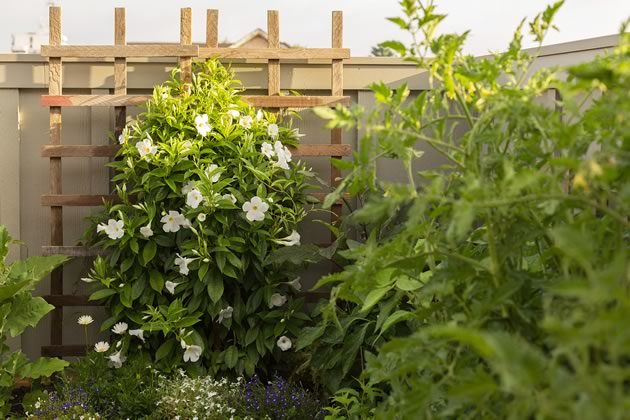 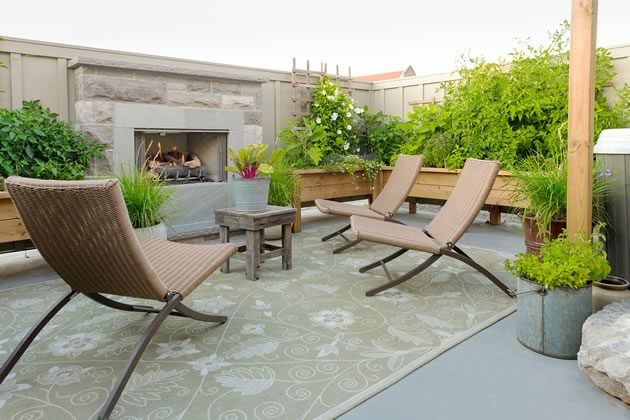 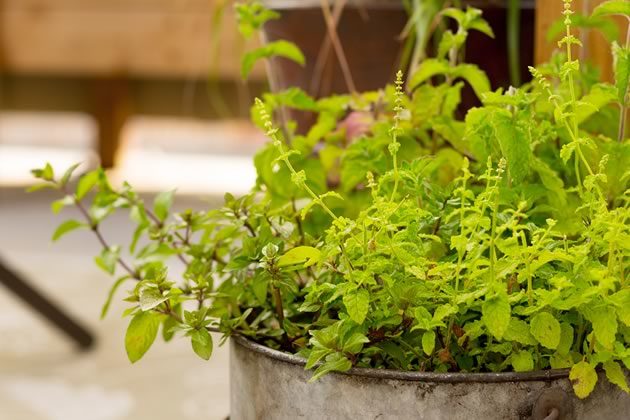 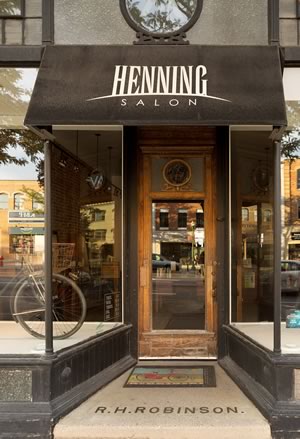 <
►
>
Kathleen Henning relaxes with her dog Frankie in the renovated, light-filled living quarters above her hair salon on Broadway. Photo by Pam Purves.