If you’ve ever wondered why they have height, width and weight restrictions on science projects at your school, it’s because of cousin Eddie’s corn dryer.

The topic of science rarely comes up at our dinner table now that my kids have cleared the public school system. There was a time when we talked of nothing else. Our lives were governed by overdue science projects.

One time I got a call from the principal of our little rural school asking if I would come and judge the annual science fair.

“I’m flattered,” I said. “But I don’t know anything about science. You pointed that out to me just last month.”

My daughter had come home furious because I had pasted a picture of a frog on her reptile project and she received a B-minus for her efforts. Mr. M. chided me in the hallway soon after. “This is your fourth reptile project, Dan. Surely by now you know that a frog is an amphibian.”

“So do you really want me to judge science projects?” I asked.

“You’re perfect for the job. You have broad shoulders. You take abuse well. And you spend a lot of time out of the country. The best part is that you have no conflicts, because none of your kids is any good at science.”

And they weren’t. My brother’s kids inherited all the left-brain science genes. It seemed whenever I called the cousins they were out classifying insects or advancing to the provincial solar car finals. If my brother called me, chances are he’d catch my kids in the middle of a whipped cream fight.

By that point I’d freighted at least 50 science projects to the school: Styrofoam castles, waterwheels, a lie detector set, windup cars, rock collections, a deadly trebuchet that broke a window, a Greek warship and more. Charlie, the bus driver, wouldn’t allow my projects on the bus. I assumed this was for safety reasons, but Charlie finally told me it was because I had helped. “Don’t do their homework!” he shouted at me and banged the bus door shut in my face.

“Charlie is right,” I said to Mr. M. “Lots of kids do these things by themselves, don’t they?”

I always liked Mr. M. He loved kids and had a great sense of humour, which is a fatal combination for anyone in education these days. He had a bad habit of bursting into laughter at the wrong moment and it got him banished to places like our little school on the hill in the middle of nowhere.

“Anyway,” he said, “you don’t have to worry about actually judging anything. I tell you who wins long before the contest, so you don’t get into trouble.” 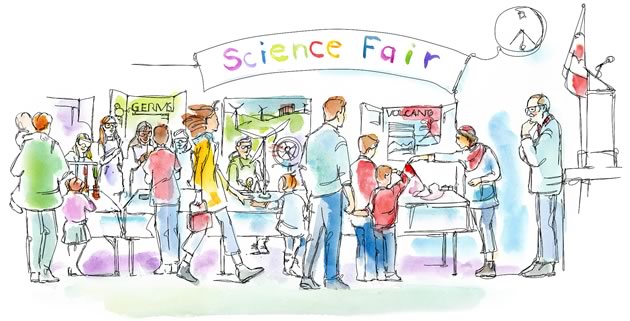 A frog is an amphibian. Illustration by Shelagh Armstrong.

This was reassuring. Mr. M. was old enough to remember the famous project my wife’s cousin Eddie entered for the 1974 Grey County Science Fair. His father said if they were going to build something it should be useful. So they went out to the shop and welded together a corn dryer about the size of a cruise missile. It weighed a ton and they had to tow it to school behind the 1066 International. If you’ve ever wondered why they have height, width and weight restrictions on science projects at your school, it’s because of cousin Eddie’s corn dryer. He didn’t win but he inspired new provincewide regulations for science fairs. And the corn dryer is still in service today.

“So what kind of projects do we have this year?” I asked.

“There’s a satellite auto-guidance system for a rototiller. The veterinarian’s kid is doing nose swabs on everybody to identify this year’s flu virus. And another kid is building an ethanol plant. I’m not sure if that one’s going to be allowed on school property because it’s basically a corn liquor distillery.”

“So which one wins?”

“None of those. You can choose among any of the Old Faithfuls – the vinegar and baking soda volcano, the leaf identification chart, or the poster that asks, ‘Which falls faster – the stone or the bag of feathers?’”

“But what about the show-offs? Won’t they be upset if they go to all that work and don’t get a prize?”

Mr. M. shrugged. “You give them each a big purple ribbon with a Special Creativity Award. Then I take a picture of the kid and their project, and we put it up in the hallway for a week. That gives you lots of time to get to the airport.”

Mr. M. is long since retired and the little school has been shuttered for nearly a decade, but every time I go by the abandoned building I am gently reminded that a frog is an amphibian.