Cancer is a bad thing. Yet it’s amazing how much good can sometimes come from bad things.

Take Lisa Hogben, for example. In 2009, Lisa was 40 years old, healthy, fit and a committed runner. Then she received the news no woman wants to hear. She had breast cancer. Moreover, she had the so-called breast cancer gene, or more correctly, she had hereditary mutations to her BRCA1 gene.

Lisa’s treatment, which included surgery, was a long and frightening journey. To cope, this Orangeville resident wrote a blog she called “Iron Girl” after the U.S. organization of the same name. The organization holds women-only running events and triathlons as a way to “bring women of all ages together as a community by offering a supportive, energetic and empowering environment for females pursuing a healthy and active lifestyle.”

And this is where the good cancer news begins. Lisa’s treatment was successful, and as her body and mind healed, she wanted to give back. So she pulled together a group of 11 women who trained together and then participated in an Iron Girl triathlon in Grimsby. Not coincidentally, the event was a breast cancer fundraiser.

Intuitively, Lisa did what experts now believe is important if more women are to become involved in sport. Rather than emphasize the race, Lisa focused on collegiality and peer support during the learning process. The women involved moved toward the Iron Girl triathlon as a group, gaining confidence and overcoming any fear they may have harboured about competing. 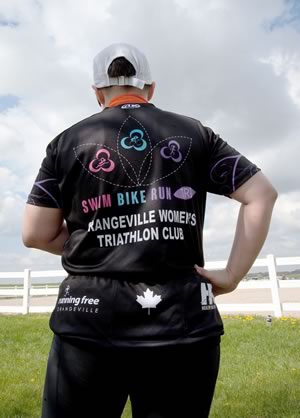 Members of the Orangeville Women’s Triathlon Club know a thing or two about team spirit. Training and socializing together has given them the confidence and support they need to swim, bike and run their way to successful Iron Girl competition. Photo by Rosemary Hasner / Black Dog Creative Arts.

In the program’s first year, some 30 participants of all ages trained together under head coach Richard. At the end of the program, they competed in the Grimsby triathlon. Now in its third year, the program involves nearly 50 women, aged 17 to 78. As they prepare for race day, they swim, cycle and run several times a week.

Called the Orangeville Women’s Triathlon Club, the organization reflects an approach to sport supported by the research of the Canadian Association for the Advancement of Women and Sport and Physical Activity. Concerned that only about half as many Canadian women as men take part in sport, the association wanted to figure out how to get more women involved. When Shelley Callaghan, a manager with the organization, interviewed women from across the country, she discovered that lack of time and money were the easy excuses. The “secret” reason so many women failed to head out to the pool or tennis court was because they didn’t want to make fools of themselves.

Lisa recognized that members of the Orangeville triathlon group are more interested in the support they receive and the personal connections they make during the training program than in winning a race. She struggled to help me understand the group’s dynamics. “We train together. We socialize together. It’s not about the race. It’s the camaraderie,” she said. “There are so many of us that you never have to train alone.” Lisa also talked about fear. By the time the women get to the Iron Girl race, she explained, they feel supported and comfortable. Excitement overcomes their fear.

Katrina Cameron’s experience with the learn-to-fly program at the Brampton Flight Centre illustrates a similar approach to learning new skills. “I’m afraid of doing the wrong thing,” she said, “whereas the men in the program often seem to push the limits.” Katrina relies on her fellow students to keep her going. “You have no idea how many times I’ve wanted to give up,” she said.

Most sports offer beginner, intermediate and advanced lessons, but Callaghan’s research uncovered a problem with that approach. Many women never advance beyond the beginner level, not because they don’t improve, but because they like the beginner instructor or they’ve become friends with their classmates. When a new student enters such a “beginner” class, she may walk into a clique of more advanced students.

“You know how it can be,” said Callaghan. “You put your mat down in a yoga class and your neighbour gives you a dirty look because you’ve just taken the spot reserved for Tina or Janet.” A learn-to program avoids such situations because the women move forward as a group.

Tina Haller and Nikola Boadway offer a popular learn-to-run program in Palgrave. Every Tuesday evening from mid-April to the end of June, a group made up mainly of women gets together for a run. They start out jogging for one minute, then walking for two. By the program’s end, most will be able to run about five kilometres in four 10-minute bursts, each followed by a minute of walking. At that point, they are ready to join the more experienced runners in the Palgrave Trail Running Club. 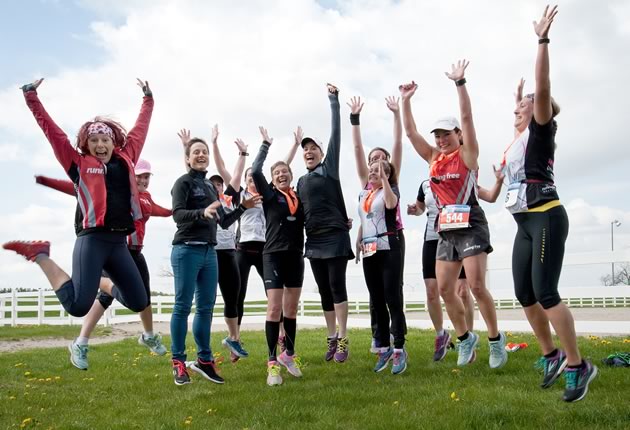 We train together. We socialize together. It’s not about the race. It’s the camaraderie. Photo by Rosemary Hasner / Black Dog Creative Arts.

The women I spoke with when I joined the learn-to group one evening were often paired with a friend or daughter. One woman had previously run a half marathon, about 21 kilometres, yet there she was running for one minute and then walking for two.

Finishing a race, rather than winning it, is more often a woman’s goal, according to Lisa. In keeping with this non-competitive approach, her personal goal has nothing to do with making it onto the podium or recording personal-best times. Instead, supporting members of the Orangeville Women’s Triathlon Club is what makes her happy. “We have the biggest cheering section at the finish line of the Grimsby Iron Girl triathlon,” says this cancer survivor.