As the owner and chefs at Orange Bistro pull together one of their top dishes for me on a recent visit, I finally understand why I haven’t been able to wrangle a written recipe from them. There’s no reason to. It’s all in their heads – not just in their heads, but deep in their DNA.

Head chef Dominic Fezzuoglio emigrated in 1981 from Salerno, near the Amalfi Coast, after a major earthquake. Chef Alfredo Ferrante came from Pescara, on the Adriatic coast in 1967. Owner Nando Mellaci was born and raised in Toronto, but spent childhood summers in his family’s hometown of Soverato, a gorgeous beach spot in the Calabria region of Italy. All three men – they have more than a century of cooking and hospitality experience at major restaurants, hotels, event venues and convention centres across the GTA among them – fondly recall learning to cook with their families as kids. 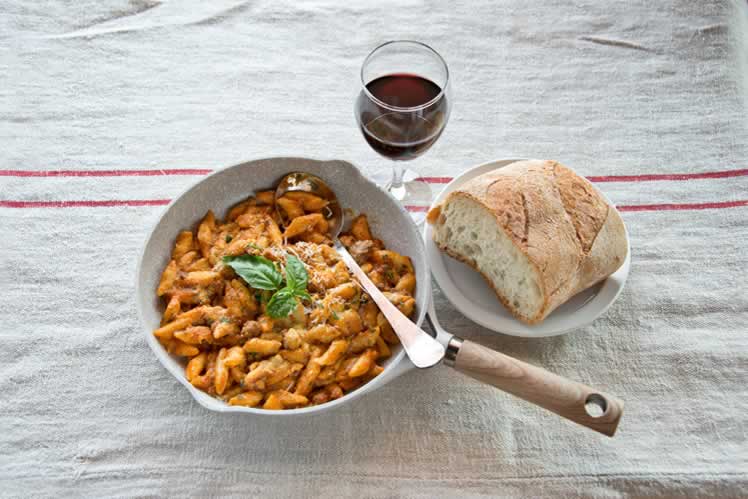 Forget that gluey gnocchi encased in plastic you’ve been tempted to buy at the supermarket – these are light, fluffy little pillows that dissolve on your tongue. Photo by Pete Paterson. Styling Jane Fellowes.

“When I was a kid I was always at my mother’s knee,” Dominic says. “Some of the greatest cooks in the world are mothers at home.”

I interrupt their kibitzing in their mother tongue long enough to pin down Dominic for his Bolognese recipe and it flows off his tongue in perfect cookbook order before he dashes off to stir a giant pot of tomato sauce. I then corner Alfredo to help me fill in the proportions of each ingredient, and again the answers come as easily as if I’d asked how to boil water.

Today Alfredo is making gnocchi in the back kitchen. It’s a dish he’s been making for 49 years (he is the eldest here, at 67). It’s difficult for him to slow down and explain each step. His hands are in constant motion and at risk of leaving the conversation behind. “You have to do what you really love,” he says. “I’ve loved being in the kitchen since I was little.”

He takes the formed gnocchi to the stoves at the front-of-house, where Dominic tosses them into a pot of boiling water and declares, “No stirring!” As soon as they float, they’re tossed into a pan of sauce – today it’s Bolognese with added marinara sauce.

“Quick, taste it before it gets cold!” urges Alfredo as we sit down for a sample. Forget that gluey gnocchi encased in plastic you’ve been tempted to buy at the supermarket – these are light, fluffy little pillows that dissolve on your tongue.

Nando strives for this kind of “aha!” moment every day in this saffron-orange space, his first as an owner. Located a little off the main track in Orangeville’s west end, the restaurant’s name is a nod to the town. Nando’s aim is to showcase real handmade Italian cooking, from pasta and hearty meat dishes to seafood and classic pizza. (Nando, Dominic and Alfredo delight in telling me that Dominic happily informs customers Italians would pooh-pooh eating pizza with a knife and fork. “If a piece is too big, you fold it and eat,” he says.)

“I’ve worked for others for 27 years,” Nando says. “I wanted to give Orangeville a taste of what it’s all about.” 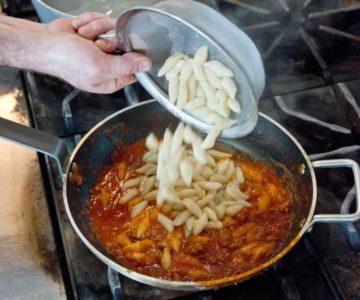 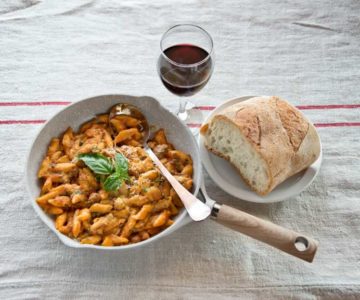 How to Make Gnocchi

The chefs at Orangeville’s Orange Bistro show us how to make the best handmade gnocchi.