The lights and lasers came on, igniting our optic nerves and setting our brains on fire. 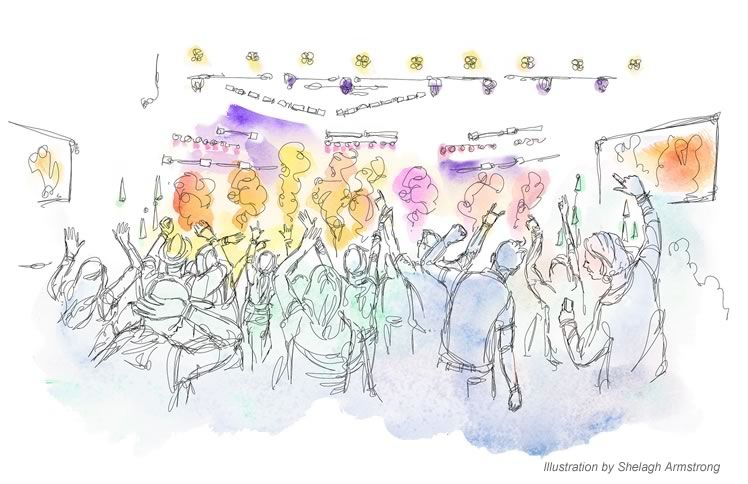 It was a muggy night and we were packed on the GO train from Port Credit to Union Station in Toronto. We were concert-goers.

Unbelievably, I was nervous. I normally love the train, the anticipation of the show, the surging crowds, and I had been planning this night for months. But a few days prior, a suicide bomber had detonated an improvised explosive device packed with metal in the foyer of England’s Manchester Arena, where thousands of young kids and teens were jammed in to see a concert by their idol. Horrific and traumatic, 23 adults and children were killed and 250 injured. So I was feeling a little shaken and extra vigilant as I took my son Adrian to his first “real” concert.

The Air Canada Centre seats close to 20,000 people during a full-house concert. We made our way through the crowds and found our seats for The Chainsmokers show. I admit I looked around – and around – my eyes roaming for unusual activity. Adrian seemed a bit nervous. This was the largest public venue he had been in other than for a Major League Baseball game. The streaming mass of humanity made the walls and staircases seem fluid before our eyes.

We waited for the opening act to come on. When she did, a happy wave swept through the crowd, but dissipated quickly when her performance lacked lustre and failed to connect beyond the front row. We went to get snacks and drinks. We squirmed in our seats. Adrian looked disappointed. We looked at our phones. Her final song had been a big hit recently, and people looked up from their screens. Then off she trotted. We waited again.

Half an hour later the house lights went down – and the crowd went wild. My parental brain had forgotten the decibels of mass joy. The lights and lasers came on, igniting our optic nerves and setting our brains on fire. I coolly snuck a look sideways at Adrian, and I’m sure I saw his jaw drop open. Being there for the moment when the two members of The Chainsmokers bounded on stage, and the space between us and them magically shortened, was worth the $400 price tag. We jumped up and down with the beat for the next three hours.

The Chainsmokers are a DJ-pop-dance-hip-hop duo, and because a lot of their music relies on intricate DJ tech and programming maneuvers, the stage, screens, videos, lasers and lights were essential to creating visual scenes to keep the excitement high. It was dazzling. Adrian tried to video it on his phone. We were screaming and laughing and singing, and though his jumpy, crazy footage really shows very little, I love the frenetic feel he captured.

I remember my first “real” concert. Of course, I had been to shows at Canada’s Wonderland, graduating on to Ontario Place, including a polka concert with my German friend Kathryn and her family, and later that same summer, Rod Stewart. But my first real concert was Def Leppard at Copps Coliseum during their 1988 Hysteria Tour – with my much older boyfriend and his friends. I remember the concrete lines and harsh lights of Hamilton at night, the smell of cigarette and pot smoke filling the Coliseum. Lights, lasers, the rotating drum set, big hair and tight jeans everywhere. I had moved into adulthood. It was the right concert, at the right time.

My husband and I both worked for a time for a music company, so we lived it up – when we had money to blow on shows and drinks, and the energy to stay up til dawn.

Looking over at Adrian, I realized he was on his way into the magical time of life when music is a release – a comforting way to express your identity, let loose and learn who you are. I can’t wait for him to discover the spectacle of the massive stage show all on his own, to go to a three-day festival, and to discover the tiny venue that will lodge in his memory forever.

For now, when The Chainsmokers sang “Paris” from their debut album, a song streamed 270 million times worldwide in its first three months, the crowd hit peak adrenaline. We were safe and there were no incidents. The atmosphere was hot and loud. Twenty thousand people were in love with the two guys on stage and wanted the night to go on forever.

The enthusiastic team at Main Place Optimists in Erin provides basketball and ongoing after-school and school-break activities and drop-in programs for kids 6 to 14 in the Town of Erin. It’s a pretty fabulous community program that has been going strong since 2004. Check them out! mainplaceoptimists.com

The works of one of our favourite sports artists, David Arrigo, are on show at Dufferin County Museum & Archives until October 14. You may have watched Arrigo at work in his studio at Hockley General Store, or seen his world-famous hockey helmets art at NHL games, or been to an elite golf or tennis event where he creates a fantastic mural legacy piece live. Drop by to see the work of one of the coolest artist in the hills! dufferinmuseum.com

Fall Fest in Caledon returns in October. Fun for the whole family, the town does an exceptional job with the kids’ activities, including crafts, skating and more! Held 1–4 p.m. in Bolton on October 1, Caledon East on October 14, and Inglewood on October 15.

We may get our kids’ opinions more often than we ask for them, but here is an official opportunity for kids to have their say while helping shape programs at the Orangeville Library. The Teen Advisory Group is inviting those age 13 and older to participate and offer their ongoing ideas. Participants will earn community service hours at the same time. The group meets once a month. orangevillelibrary.ca

Staying in for the night?

Did you know your local library supports ebook and audio book downloads for your at-home digital reader? The Ontario Library Consortium features specially curated collections for kids and teens, making thousands of titles available in a centralized way for quick search. Your child just needs a library card to log in. There is also a new app called “Libby” that makes all the downloading and searching seamless. Now, we’ll be right back – we’re off for a moment with Harry Potter. odmc.overdrive.com

The goodness of soup

The Orangeville chapter of Soup Sisters – supported by Lavender Blue Catering in Mono – are inviting the community to register and attend a fun-filled evening creating nutritious soups from scratch. Teens are welcome to participate (with an adult if under 16). Twelve to 24 guests will enjoy wine, freshly baked bread, salad and delicious soup. The remainder of the freshly prepared soup will be packaged and delivered to the women and children at Family Transition Place – a place worthy of our time and effort in support of families living in the hills. Registration is $55. soupsisters.org/orange.php