Saying farewell to a beloved home is never easy.

Sandy Ball and Patrick Bogert didn’t know it then, but when they unwrapped the Christmas ornaments last winter, it would be for the final time in the pretty stone house they had called home for 12 years.

By the time spring rolled around they had made a momentous decision. The longtime local real estate agents had been talking about retiring for awhile, but there was always some reason to put it off. Then suddenly that changed. They finally came to terms with the real reason for their indecision. Retiring would mean giving up their beloved home. 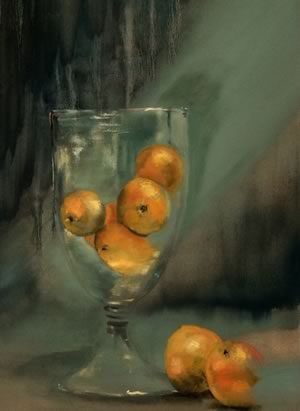 One of Sandy’s accomplished still-life paintings. Photo by Pam Purves.

As realtors they knew the back roads and secret hideaways of the hills better than most – and they’d seen many a lovely country property. But in 2005 they had a listing they knew they couldn’t bear to let go to another buyer. The 1835 fieldstone house in the rolling hills of Mono had thick, sturdy walls, deep window casements, wide floorboards and intimate rooms. Set well back from the road, overlooking a scenic pond and sheltered by a woods, it beckoned them irresistibly.

Everyone who lives in the country knows there’s a lot of work to do. Old houses need updating, large properties need maintenance, barns need foundations shored up. For people who choose the country, these are often labours of love. Country dwellers are also lured to nature. They hike or bike, plant gardens and put down preserves. They work at the things they love. Patrick and Sandy embraced the tasks with enthusiasm.

Being “doers,” they welcomed the challenges of the old building. Being modern, one of those challenges was opening up the space. As with so many renovations of older homes, walls were moved, a new kitchen installed and energy-efficient windows went in. The house had two large fireplaces that became centrepieces in each of the living room and the kitchen/dining area. The kitchen fireplace, originally used for cooking, was restored to good working order, although its function is now more aesthetic than practical.

Narrow doors were expanded into wide passageways on the ground floor. The enlarged living room entrance now revealed a view of the sculpturally curved banister that rises up the stairs to the second floor. Widening the doors but leaving the walls intact was an ingenious solution for creating a contemporary sense of spaciousness without sacrificing the more traditional feel of moving from room to room, function to function, mood to mood.

On the second floor, Sandy and Patrick opted to make smaller spaces. Two large bedrooms became three small bedrooms and two bathrooms – a practical decision in keeping with houses of the period.

Situated to take advantage of the view of the pond and woods, the house was located close to where the original settlers’ first home, a log cabin, had once stood. Fortunately, rather than being torn down, the cabin was moved elsewhere on the property, where it was well maintained and eventually used as a rental space.

The original barn had also been well maintained and converted into artists’ studios. By the time Patrick and Sandy moved in, the artists had moved on, so the couple adapted the spaces for their own studios. Sandy is a talented painter of portraits, landscapes and still life, and Patrick is a skilled carpenter and woodworker whose turned bowls are coveted. Sandy noted the studio space here was much larger than her previous workspace and inspired more ambitious work. Her paintings started to grow in number and size.

Patrick and Sandy also invested their time outdoors. “We inexpertly created a vegetable garden that produced tons of potatoes one year and none the next,” Patrick explained. “But in the good years, Jimmy, our cairn terrier, loved to dig them up and he dug so furiously you could see potatoes shooting out behind him.” Nor was Jimmy the only dog who took his work seriously. Monk, a handsome red-headed Labradoodle, would trot to the end of the driveway every day to pick up the newspaper and, in good weather, reward himself with a long swim in the pond.

And there was always something new happening. Last year Patrick and Sandy found a mad tangle of wild grapes growing against the barn, so of course they made wild grape jelly.

An added advantage to the property was its proximity to Mono Cliffs Inn, a place where it’s always possible to drop in and find a neighbour with whom to share a little cheer. “Everything was just down the road,” Sandy said.

One of the most inspired additions to the house was a large, square screened porch Patrick built with the aid of a contractor. Here the couple regularly convened to relax and review their day, sipping wine as the light faded with the setting sun.

And it was those peaceful moments as much as any that defined their time here. “There was always something to watch. There were lots of geese, ducks and turtles providing entertainment, and we often heard the coyotes singing,” said Sandy. And plenty of deer visiting the salt lick they put out every year.

So how could they let it go? Well, age requires concessions. In recent years they have spent much of the hot months at their charming seaside cottage in the Gaspé, and they decamped to Florida for the worst of the winter, with those sojourns lasting longer each year. 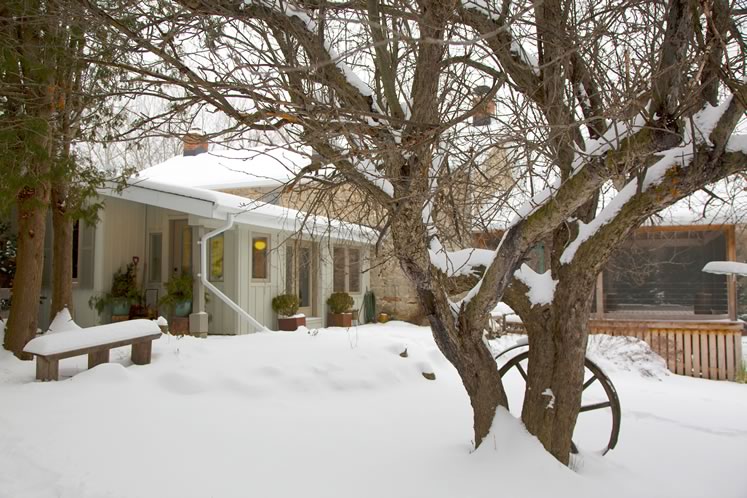 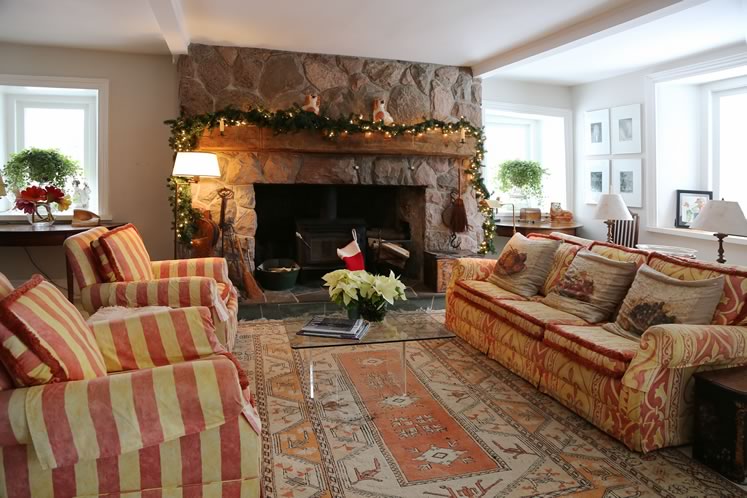 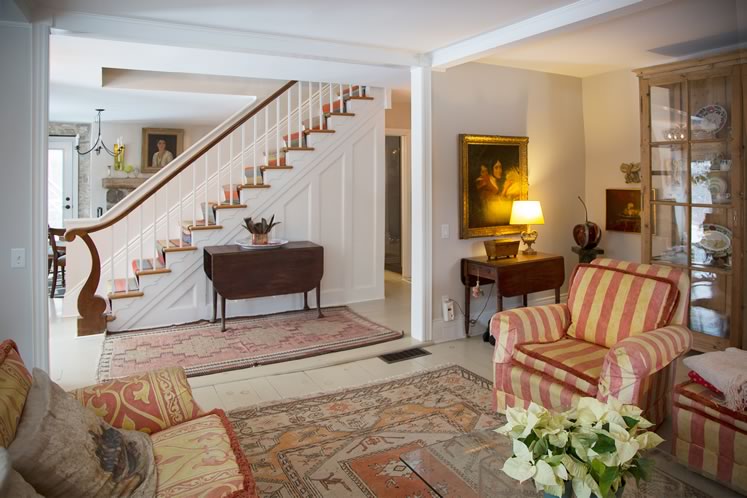 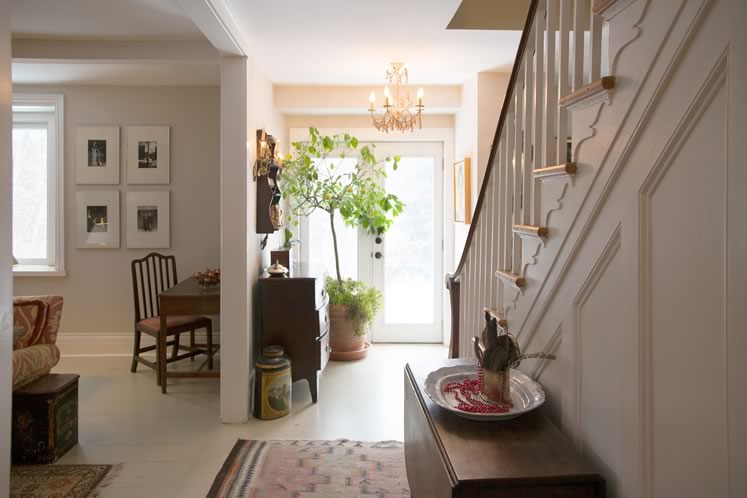 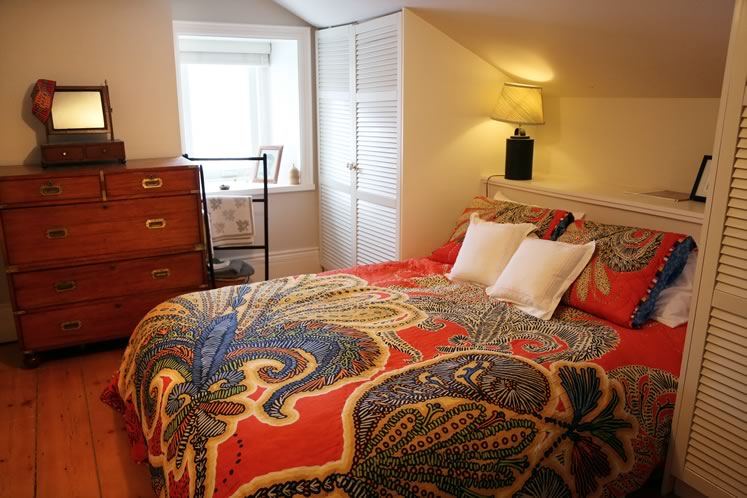 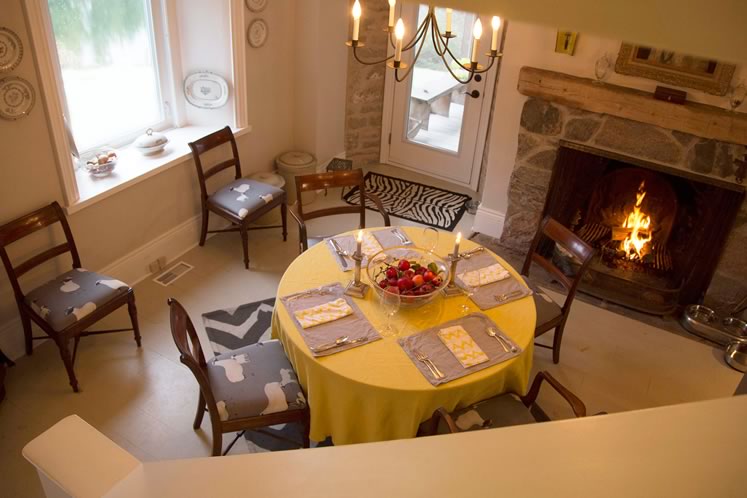 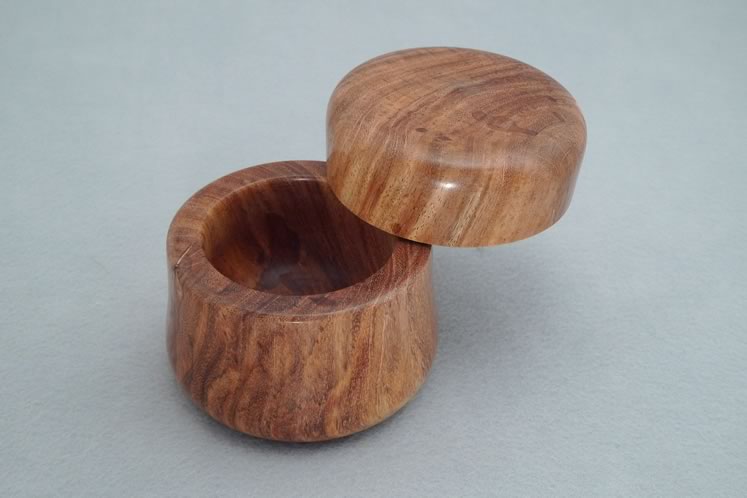 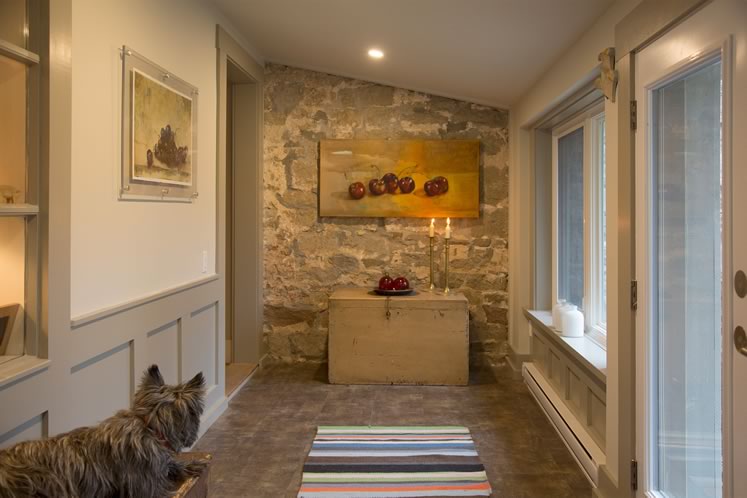 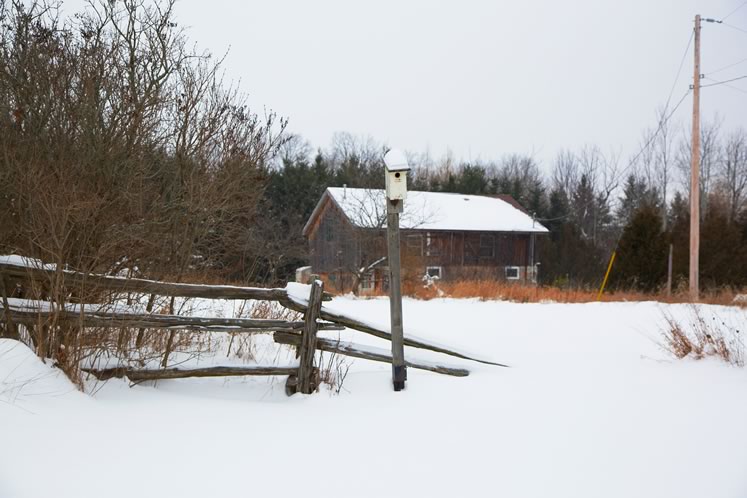 <
►
>
Gorgeous fabrics and a wonderful antique kilim in the living room add richness that suits the fieldstone fireplace and deep casements of this early 19th century stone house. Photo by Pam Purves.

Although the Mono house was the place they called home, they reluctantly admitted the time they spent there was shrinking, and the work on the property that once inspired them had begun at times to feel more burdensome than fun.

The property sold quickly in the past summer’s hot market, and by fall Patrick and Sandy had said their last goodbyes – though, as with all well-loved homes, a little of their heart remained behind.