Jan Hannah: One of our 2017 Local Heroes

Jan Hannah was 24 when she finally got a dog. She picked up Roo, a young pup, at the Guelph Humane Society, and until his death 17 years later she was entirely devoted to the tall, elegant husky-shepherd cross. “Dogs are the best company,” says Jan. “I’d choose to be with a dog over anybody.” 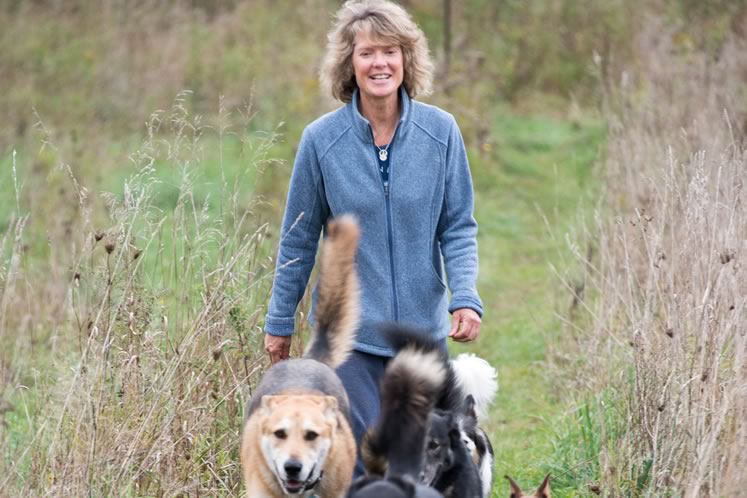 Jan travels to Indigenous communities throughout North America to consult with people about managing dog populations. Photo by Pete Paterson.

Her love of her best friends serves her well. As the energetic spark behind the International Fund for Animal Welfare’s Northern Dogs Project, Jan travels to Indigenous communities throughout North America to consult with people about managing dog populations. As a result, she spends a lot of time visiting dogs, talking about dogs, caring for dogs and, when necessary, bringing dogs home.

Over the 15 years Jan has managed the project, she has transferred some 900 dogs to Southern Ontario from remote northern First Nation communities. Although the project’s objective is to keep dog and owner together, intervention is sometimes required, and at the request of a dog’s owner or the community, a dog may be rehomed. But slowly and steadily, says Jan, that is changing.

Historically, dogs played well-defined roles in Indigenous communities. Both working partners and companions, dogs were used for hunting, sledding and guarding a family’s camp. But as life has changed in the North, few dogs are now worked – but many aren’t cared for as family pets either. When Jan began travelling to remote First Nation communities, few of the dogs she encountered had names or were allowed inside their owners’ houses.

That’s also starting to change, she says. Few remote communities have access to veterinary care, so several times a year Jan and a crew of experienced volunteers, accompanied by vets and technicians, travel north to operate clinics where dogs are spayed or neutered, dewormed, vaccinated and treated for myriad other problems. Jan and the volunteers use the opportunity to speak with the dogs’ owners.

“Dogs don’t rate in the top five problems for First Nations,” says Jan, “but they come up often in conversation.” Fifteen years on, many dogs have names, they are often allowed inside, and residents regularly select more manageable smaller breeds. “More people now see dogs as pets,” she says.

Of the canines the project has rehomed, about 50 have been placed locally, many in Inglewood, where Jan lives.

Jan’s skill at matching dog and owner comes from her uncommon understanding of her four-legged wards. “It’s pretty simple,” she says. “These northern dogs grew up running free, so they learned to think for themselves. They’re smart. If a pup doesn’t learn to roll over in front of an alpha male, he’s not going to make it in the community.”

Northern dogs have learned how to get along with other dogs, but they also value the time they have with “their person” because they’ve had so little of it. “They’re resilient,” says Jan, “like their people.”

Nor are the dogs a product of their owner’s idiosyncrasies as so many of their southern cousins can be, she explains. “I mostly just need to match energy levels between owner and dog, because a tired dog is a happy dog owner.”