Susan Reynolds: One of our 2017 Local Heroes

To say Susan Reynolds has a thing for art would be an understatement.

If you’ve passed through the lobby of Theatre Orangeville or the town’s Visitor Information Centre on Highway 10, you may have noticed the ever-evolving art exhibits. For the last decade Susan has been the quiet and diligent force who searches out local artists and curates these shows. 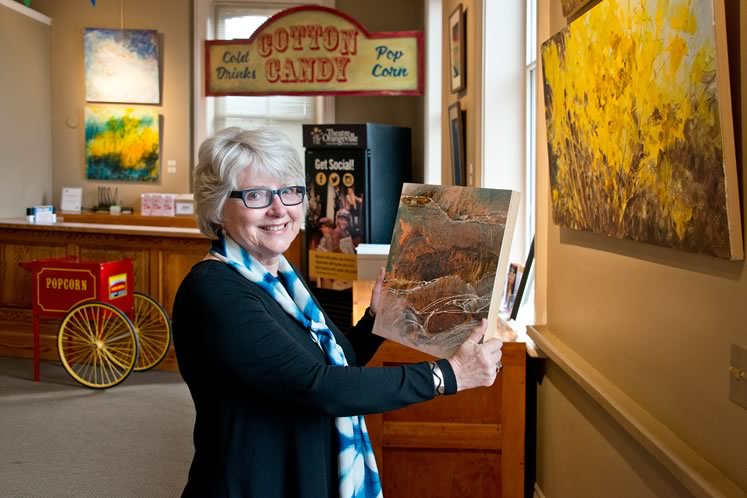 Susan Reynolds holds a painting by Cathy Dalton, one of the artists in a recent show Susan curated in the lobby of Theatre Orangeville. Photo by Pete Paterson.

Susan’s involvement with the arts comes from a lifelong interest. Both her mother, a weaver, and her brother, a designer, were art teachers. “I never thought it was separate,” she says. “I thought art was an extension of people.”

A downtown Orangeville resident and a regular at theatre performances, Susan noticed the art in the theatre’s lobby rarely changed, nor was it particularly inspired. With as many as 3,000 people passing through the lobby with each production, it occurred to her it was an excellent venue to showcase local art. With the blessing of then manager Marilyn Logan, she set about finding and presenting new artists for each play.

Since then, more than 150 individual artists and about a dozen arts groups have had their work displayed at more than 70 productions. Furthermore, each exhibit is tailored in some way to relate to the theme of the play. On occasion an artist will even paint something specifically to suit the production.

Susan does not like to describe her contribution as providing “exposure” for the artists. “I’ve always thought they were doing me the favour,” she says. “The artists have been so generous sharing themselves. Nobody has said no.” She describes it as a win-win situation, because it also enhances the experience of the theatre patrons.

Three days a week Susan helms the desk at Orangeville’s Visitor Information Centre, and she has taken her knack for curating local art there too. Until the end of November, the monthly exhibit will feature Orangeville artist Roslyn Levin, who works in the Chinese style of sumi-e. In December, the lobby will host representative work from Holiday Treasures, the Christmas arts and crafts show at Dufferin County Museum & Archives. Susan can sometimes also be found giving guided bus tours of Orangeville’s tree sculptures.

As to her own creative talents, Susan insists she is not an artist, merely a “dabbler,” though some would beg to differ. She particularly enjoys basket weaving, a skill she has also taught. And she is currently creating 100 Christmas ornaments to be sold as part of Theatre Orangeville’s Victorian Christmas celebration, with proceeds going to the theatre’s youth programs.

Susan has organized children’s events for Headwaters Arts Festival, given workshops and taught night school. Along with her friend Joan Hope, owner of Dragonfly Arts on Broadway, she organized a series of children’s concerts when their kids were little, featuring such luminaries as Mr. Dressup (Ernie Coombs) and Fred Penner.

Susan is quick to thank her husband Tony (a contributor to this magazine) for supporting her enthusiasms. “He’s always there to help hang,” she says, “and accompany me to shows on weekends. He also helps me keep all these artists in my memory bank.”

Of her long project Susan says, “I don’t have one bad story.” Plus, she quips, “I’m always taking things back and forth, so our apartment always has somebody’s incredible art.”

This story contains two corrections from the print version regarding the number of artists displayed in the theatre lobby and the number of ornaments Susan made for Victorian Christmas. 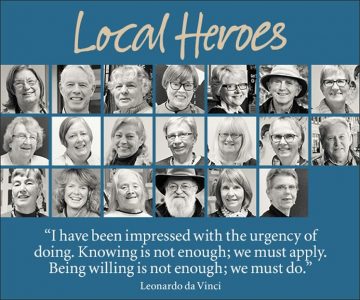 A salute to those who make a difference by Jeff Rollings and Nicola Ross.