When The Yellow Briar was published in 1933 it hit all the right notes for a readership mired in the Great Depression.

A Tale of Two Stories

In the 1930s, the life story of an Irish immigrant in these hills became a popular bestseller and was en route to a comfortable niche in Canadian literature when it was sidetracked by a second story, that of its author. 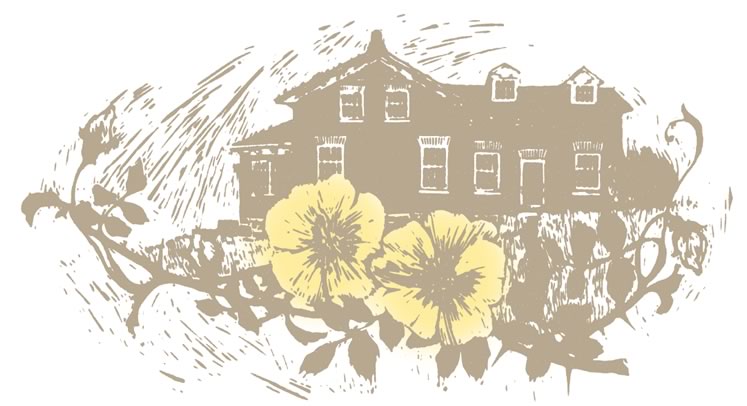 This illustration of Mitchell’s childhood home and the setting for the novel, the Yellow Briar homestead on Mono’s 5th Line, is by Alan Daniel, reprinted from the 1970 edition of the book.

At the end of his life, an old man named Patrick Slater looks back to the beginning in quiet wonder at how it all turned out and, before he dies, writes an autobiography that tugs at the heartstrings.

In the process, Patrick – actually Paddy, for he is unremittingly Irish throughout – takes readers on a historical journey, most of it here in these hills.

He was “of the poor Irish,” the people who left Ireland during the famine of the 1840s, fleeing in the thousands and dying in those numbers, too, in the foul cargo holds of leaky ships along the shores of the St. Lawrence and in the cholera sheds at Toronto’s harbour.

Paddy is a child when his family emigrates and he bears witness to this great human trek. He watches his father die on the way and, at age nine, becomes an orphan in Toronto when cholera takes his mother. He is taken in as a combination adoptee and hired help at a farm on the 5th Line of Mono Township. Here a yellow briar rose is planted and thrives through years, still blooming as old Paddy tells his story.

Although the young orphan spends a brief but exciting time in early Toronto, the heart of The Yellow Briar is Slater’s life on this farm and in the Irish farming community that surrounds it.

The appeal of the novel

When The Yellow Briar was published in 1933 it hit all the right notes for a readership mired in the Great Depression and for whom radio and “talkies” (movies with sound) were still quite new. Slater’s life story delighted readers with its splendid characters, its range of comedy and tragedy and, always appealing in popular literature of the time, its tale of unrequited love.

There is adventure in the story too. Patrick’s hopeless love for the farmer’s daughter causes him to run off to fight in the American Civil War, and he also serves as a deckhand on a lake freighter out of Port Credit. However, the majority of the story is set specifically in the hills of Mono (which reviewers insisted on calling “Caledon Hills”) and the local references and history give the book particular appeal to readers in Headwaters.

The author’s love of the countryside, his clever but gentle wit and his ear for the dialogue of his 19th-century Irish immigrant community evoke what one reviewer of the time described as “an early Ontario museum that moves and is alive.”

Included in that “museum,” typical of past times in the hills, is the tension caused by religion. Paddy was a Catholic, but the farmer who took him in was a Methodist, as were the majority of the neighbours, and the religious divide adds a subtle but poignant theme to the story. Although this orphan loved his second family and longed to be fully absorbed by it, the religious barrier meant he would always be an outsider.

The theme of the outsider is even more profound in light of the story behind The Yellow Briar. Like the character he created, the book’s real author, a lawyer named John Mitchell, also seemed perpetually at odds with his milieu. At Mitchell’s death in 1951, the Toronto Globe and Mail’s obituary praised his literary achievement but called his life “as bizarre and pathetic as anything found between the covers of a book.”

Toronto lawyer John Mitchell, born in Mono in 1880, first published his novel The Yellow Briar in 1933 under the assumed identity of Patrick Slater (c.1838– 1924), presenting it as an autobiographical memoir of an elderly farmer. Illustration by Alan Daniel, reprinted from the 1970 edition of the book.

The Yellow Briar began its literary life in 1933 as a gentle hoax. Although the novel was built around John Mitchell’s experiences growing up on a farm in Mono, with the co-operation of his publisher it was presented as the genuine autobiography of Patrick Slater, and most reviewers accepted it as such. The Toronto Star bought in with enthusiasm, calling it a “classic of realism.” The London (England) Times praised Patrick Slater’s wit and deep love for his country. Even though the author’s acquaintances and colleagues were well aware the book was fictional, and the Toronto Globe clearly stated it was written by a “lawyer walking the streets of Toronto,” the hoax continued for months.

In what proved to be a feature of his character, Mitchell himself seemed ambivalent about how far to push the deception. He gave interviews presenting himself as an acquaintance of the author. But in 1934, when the Ladies Aid at Mitchell Church (built on Mono’s 5th Line on land given to the Methodists by Mitchell’s grandfather in 1868) wrote to Patrick Slater, they got a reply from John Mitchell!

Curiously, as the true authorship became widely known, no one appeared to mind. In fact, readers seemed to enjoy the joke, and The Yellow Briar’s popularity zoomed. Unfortunately, Mitchell’s own story would soon intervene.

In May 1935, the Orangeville Banner, hyped up on the story of a local boy made good, urged readers not to miss a lecture to be delivered in Mono “by John Mitchell (Patrick Slater) author of The Yellow Briar.” Just three months later, a front page story in the Banner described a scandalous downturn for Mitchell. A large black headline declared, “Toronto Author and Barrister Surrenders Himself to Police,” making it clear he was not really a local boy anymore.

The narrative was another, more serious case of Mitchell rowing against the current. In his law practice, by virtue of incompetent accounting (his own words), he had fallen into debt and used clients’ money illegally to rescue himself. His defalcations (again his word) amounted to over $20,000.

What made the story more intriguing is that it was Mitchell who exposed his own fraud. He made a public confession and, with equal drama, utterly refused help from fellow lawyers. He presented himself to police and insisted on being charged. The legal system obliged. He was disbarred and spent six months at the Langstaff jail farm north of Toronto.

As a consequence, The Yellow Briar, which had been sailing along with multiple printings, acquired a taint. Sales declined, and after a brief period what had once been a bestseller disappeared from bookstore shelves.

The fate of the book and its author

The Yellow Briar, originally published by Thomas Allen, was out of print by 1940, but in 1970 Macmillan of Canada issued a new edition, including a lengthy introduction by Dorothy Bishop recounting Mitchell’s personal story. It too went out of print, but in 1990 an edition was published by Dundurn Press and is still available in local bookstores.

John Mitchell wrote three more books before his death in 1951, each a failure, and the reclusive bachelor spent his remaining years in lonely poverty. Sadly, he would never know of the many readers who held and still hold his first novel in high regard.

In 1953, at Mitchell Church (“his” church) a memorial was dedicated to him, paid for by public subscription. At a time when this kind of undertaking required major fuss – letters, cheques, envelopes, stamps – the campaign was significantly oversubscribed and was also able to cover the cost of a stone at Mitchell’s grave near Port Credit. Two yellow briar roses were planted at his graveside.