More than 70 years later, Stan reflects on his history with horses.

Stan Shapiro, a raconteur who has nurtured a passion for horses for seven decades, still recalls the moment he became enamoured of the animals that have been a constant in his life.

The story goes that his grandmother’s milkman, who made his deliveries in a horse-drawn wagon, had taken four-year-old Stan to visit Roselawn Dairy in Toronto. While the youngster was exploring the haymow in the dairy’s barn, he gleefully dropped open a trap door and slid down it onto the back of the unsuspecting horse in the stall below.

More than 70 years later, Stan reflects on his history with horses. He has competed in rodeo events, primarily roping calves, driven a six-horse Percheron hitch on the heavy horse circuit, and with his wife Ann, operated a horse breeding and boarding facility near Heidelberg, Ontario. The two were also part of foxhunting circles, travelling both in Canada and south of the border to take part in hunts.

Stan was hired by Walt Disney Pictures as a horse wrangler for the film Squanto: A Warrior’s Tale, and he worked as a wrangler on the movie Trapped in Paradise, starring Nicolas Cage. With help from Ann, Stan was also in charge of the horse teams and stagecoach work in the CBC series The Campbells, co-produced by Patrick Doyle.

He conceived, established and operated a horse-drawn trolley business out of the St. Jacobs Farmers’ Market, as well as a horseback outfitting and tripping business near Algonquin Park, a venture that attracted visitors from around the world.

His was the voice you heard announcing at the Orangeville Fall Fair heavy horse show, and if one of your kids took riding lessons at the Sunnybrook Riding Academy in Richmond Hill, you likely crossed paths with Stan, an instructor there for many years. 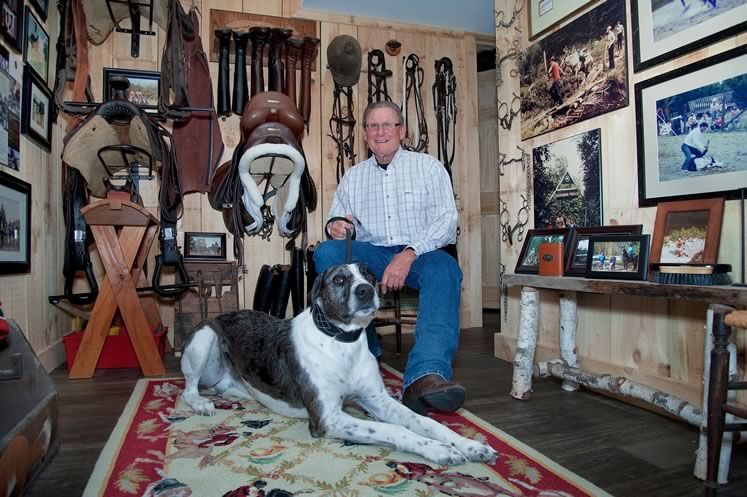 Stan Shapiro and Blue amid the memorabilia of a lifetime spent in the company of horses. Photo by Rosemary Hasner / Black Dog Creative Arts.

Today, aware of the ineluctable pressures aging places on a well-used body, Stan makes a point of walking four miles most days with Blue, his beloved lurcher, because, he says, “Everything is dependent on your health.”

Stan no longer runs a barn, but he still enjoys exercising horses for friends – and for strangers who become friends – and keeping himself “somewhat” active. As Stan says, you are “never too old to say never say never.”