One of the most beloved tropes in interior design is “bringing the outside in,” a décor trick in which homeowners and designers mimic verdant gardens and lush outdoor spaces inside. Large windows or French doors render backyard gardens up close and personal; natural colours or plant motifs on walls and upholstery blur the interior-exterior boundaries. 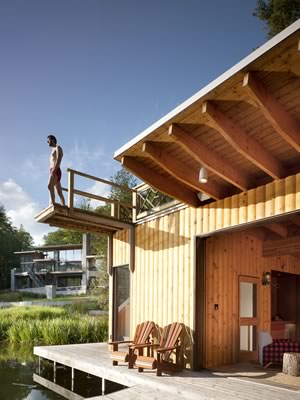 Shaun Moore of Toronto’s Made Design, who designed and sourced the interiors of this boathouse, tests the diving platform. Photography © Ben Rahn / A-Frame.

For a lucky few, like the family of five who weekends on this private lake in Caledon, their homes are designed to feel like they sprouted from the ground up, fully formed, few décor tricks required.

The owners approached Peter Berton and Thomas Wilson of Toronto’s +VG Architects asking for a contemporary home tied in a narrative with its rugged surroundings – still a relatively fresh idea in an area besotted with Victorian originals and reproductions, quaint farmsteads and log houses. “They had pretty clear ideas about the direction they wanted it to go,” says Thomas. “They were committed to a modern aesthetic, but with a use of natural materials.”

So despite the modern edge here, you won’t find a lot of chrome or slick mid-century cornerstones. Instead, this is an indoor-outdoor medley of heavy timber, Douglas fir and Owen Sound ledge rock, which does double duty as fireplace surrounds and exterior walls in the three-storey design.

It’s no surprise to hear the wife is from the West Coast and a fan of the woodsy, rustic architecture popular in that region, or that Peter once worked with famed West Coast architect Ron Thom and considers him a mentor. Thom designed 1960s and 1970s modern Ontario landmarks including the University of Toronto’s Massey College, Trent University, North York’s Prince Hotel and the Shaw Festival Theatre.

“What we were trying to do was capitalize on the landscape and make a lot of transparency in the building and introduce all sorts of natural materials to make it feel like a country retreat,” says Peter, who had a similar impulse when hunting for the weekend property he owns in Mono, a modern house by the late Toronto architect George Boake of Crang & Boake (who coincidentally worked with Ron Thom on the Metropolitan Toronto Zoo in 1974).

The interior was conceived as a series of platforms from which the owners can see and experience their stunning setting. “Each room has a particular framed view of the exterior,” Thomas says. The rooms that don’t look out at the lake look back at the hillside rising behind the house.

The windows aren’t just for seeing out, though. They’re also crucial to introducing the house from the lane-way. Peter and Thomas sound like movie directors as they describe the drama of approaching the house. As you move toward the main entrance through a courtyard framed by the house on the right and a hillside on the left, “You begin to see through the windows and glimpse the lake through the building itself,” says Thomas.

A small lobby opens into the two-storey central living space, with a big fireplace to the left and a massive view of the lake straight ahead. “You want people to walk into a house and get a surprise,” says Peter. Other surprises come in the form of the couple’s large-scale art collection, including birch log wall installations and a giant bust on the front lawn, and the home’s sleek-yet-rugged furniture choices. Much of it was created or sourced by Shaun Moore of Toronto’s Made Design.

Still, this space is not all soaring ceilings and big air, as you might find in a gallery or museum. The scale shrinks to hug the home’s more intimate rooms, such as the dining area and the library. The tone is set back at the front door, which on a large home like this could feel like the intimidating gates of Oz. “You like to have something that’s near your height at the front. That’s why the roof slopes out toward the lake one way and up away from the lake the other way,” says Thomas. 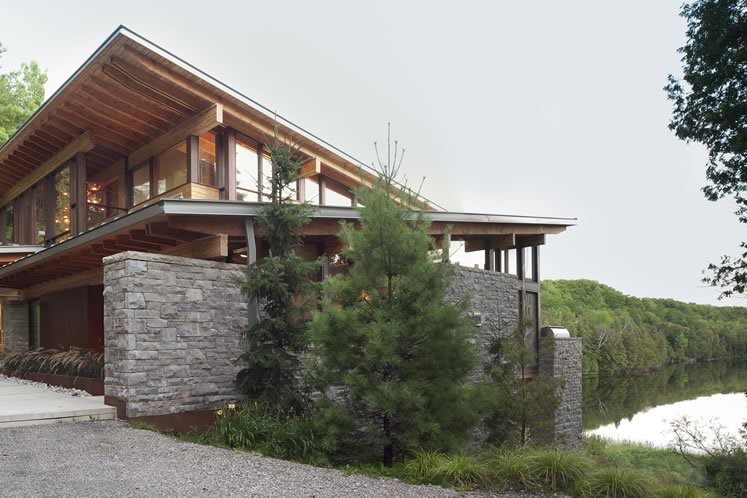 It would be years before the family could finally put their feet up and gaze out at their lake. To build on a special property like this, there was a long gauntlet to run with provincial, municipal and environmental regulators, including the Niagara Escarpment Commission and Ministry of Natural Resources and Forestry. Environmental concerns included the fact that the lake is a spawning ground for brown trout.

Peter, Thomas and the owners were keen to comply, since all that nature is the point of the place. They started design work in 2004, and then spent two years waiting for the permits and applications to clear. The project was finished by builder Reidmann Management in 2009 after a two-year construction period. “They were very patient clients,” says Peter. “It was a long construction. It wasn’t a simple building.”

The couple was also keen to give the architects free rein to propose ideas and try things, Thomas says. There were a few moments when some of those new things seemed a little too ambitious. All that transparency relied on a number of walls that didn’t extend all the way to the ceiling in early designs, for instance. “Our structural engineer kept coming back to us and saying, ‘You need to have some solid walls that go floor to ceiling to hold the building together,’” says Thomas. To use as few floor-to-ceiling walls as possible, they turned to moment frames – steel beams and columns welded to make a rigid structure that resists lateral force and creates a sturdy, windproof structure.

Another challenge was figuring out how to regulate temperatures in a mostly glass house. The low-emissivity glass they chose is engineered to keep warm air in during winter and cool air in during summer. And the heating and air conditioning system is divided into four separate zones, so the family can tweak the indoor climate.

That’s key because the bedrooms, for example, are dispersed throughout. The master and guest rooms are tucked into the east end of the ground floor. The second floor mostly comprises two kids’ bedrooms flanking the air space above the living room. A completely separate main-floor “retreat” suite sits apart from the main house and is connected by a stairway to the ground floor. (As the kids get older, this retreat, complete with an outdoor shower, will give the owners more privacy.)

For cooling off outdoors, there is a choice between the infinity pool, steps outside the lower floor, and the lake. The family are ardent lake swimmers and specified the boathouse, which only houses human-powered vessels, include a diving platform. Shaun Moore also helped decorate the boxy boat house, with log coffee tables, buffalo plaid upholstered pieces and other winks at earnest Canadiana. 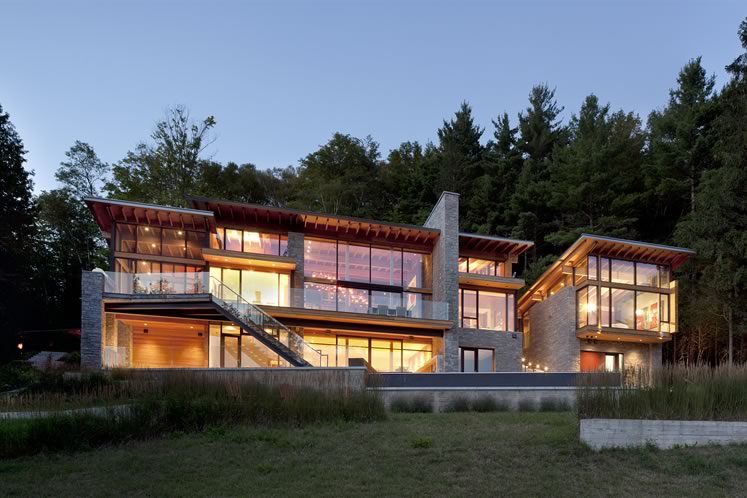 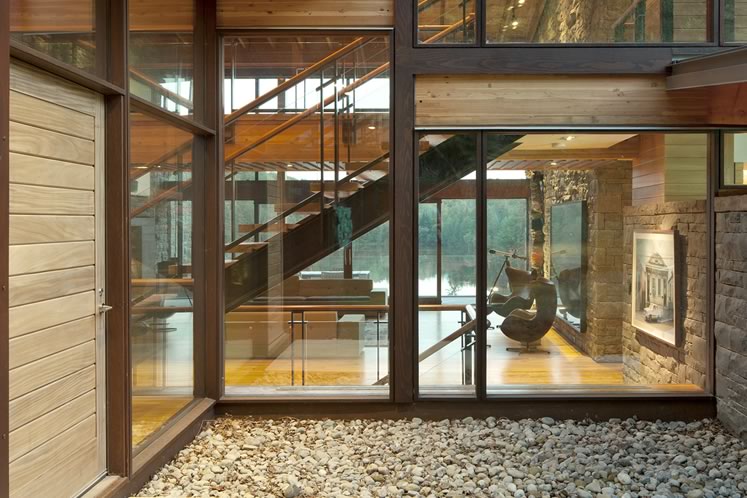 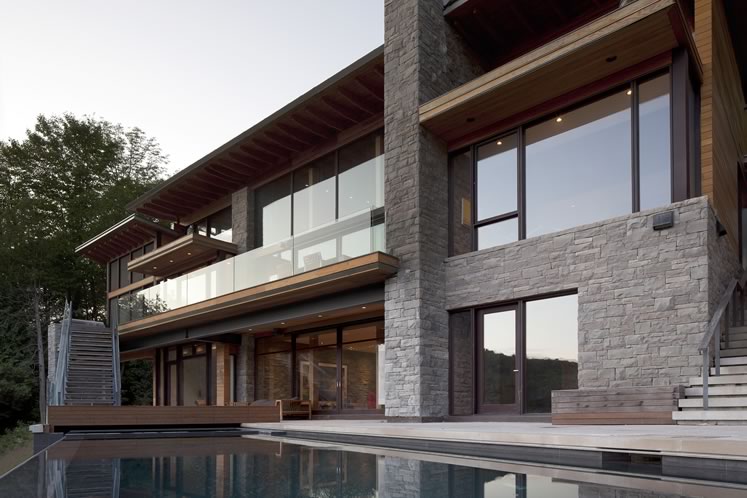 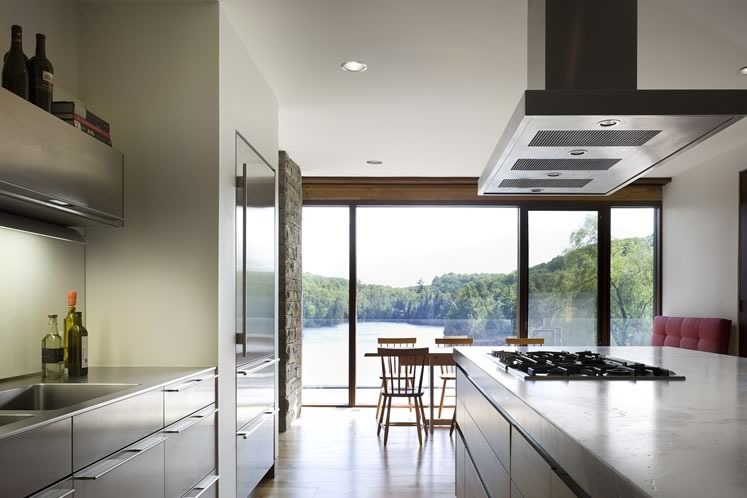 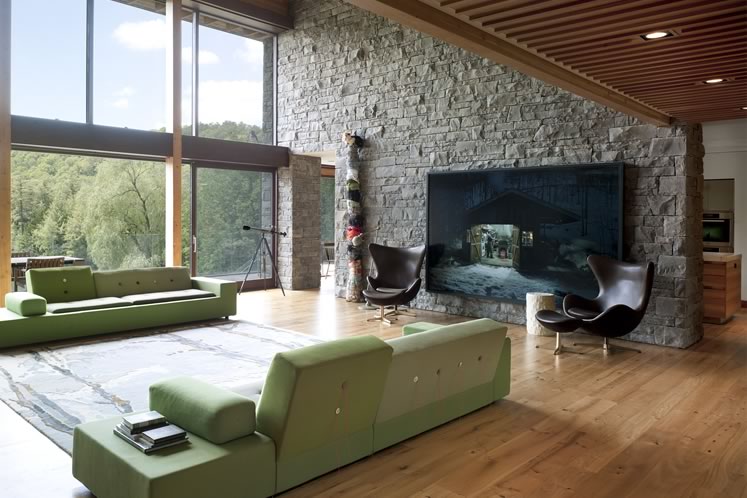 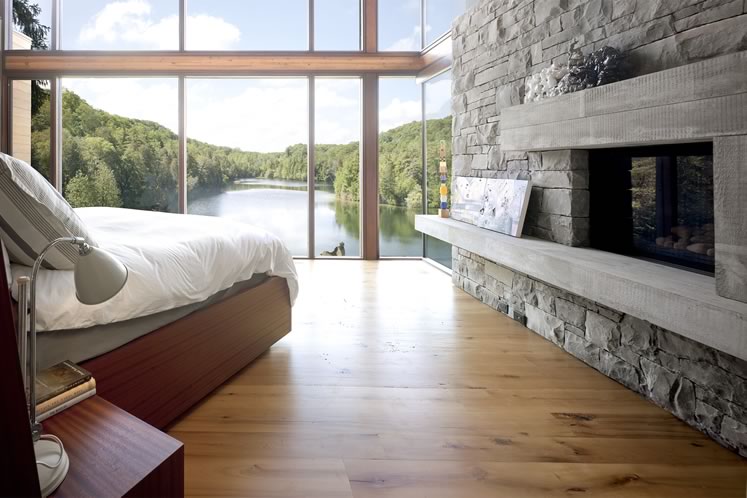 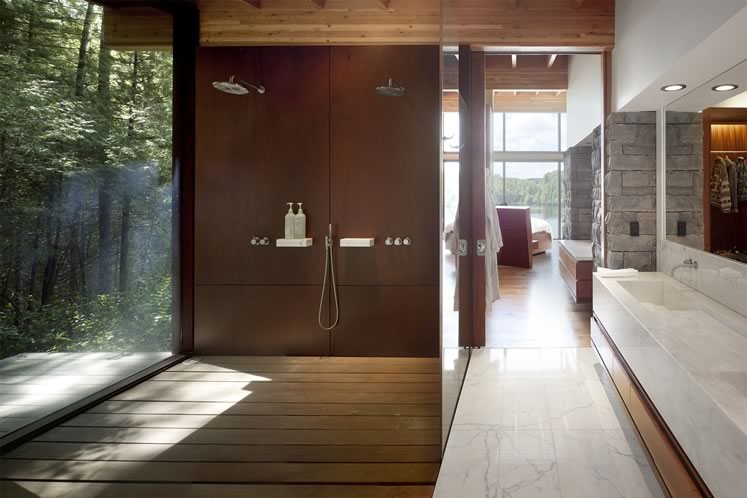 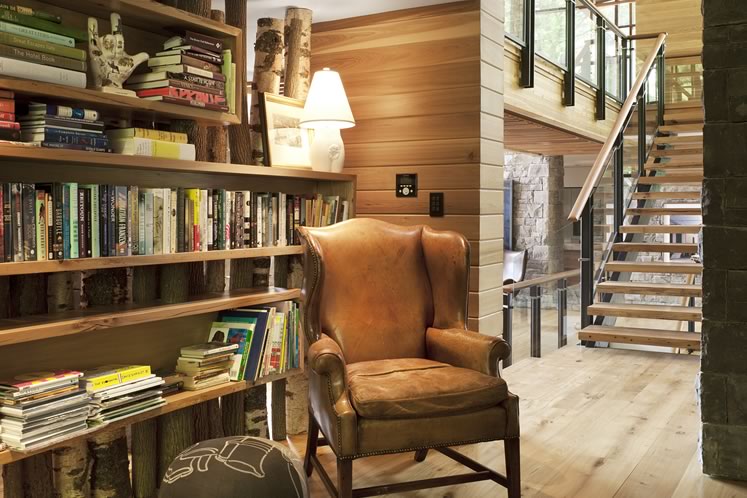 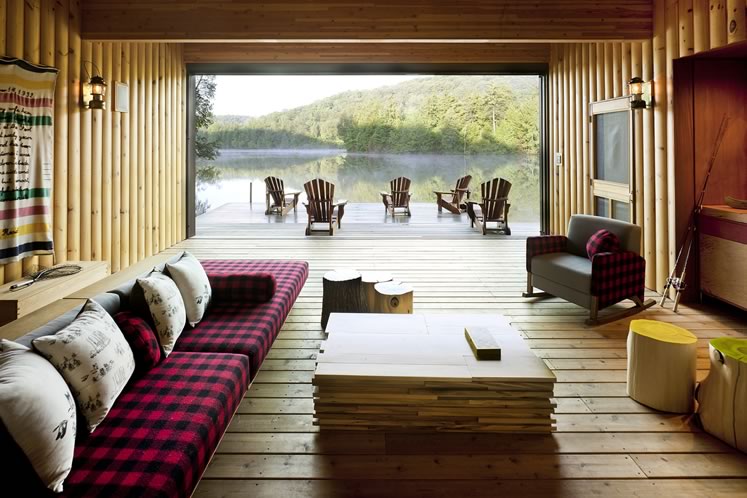 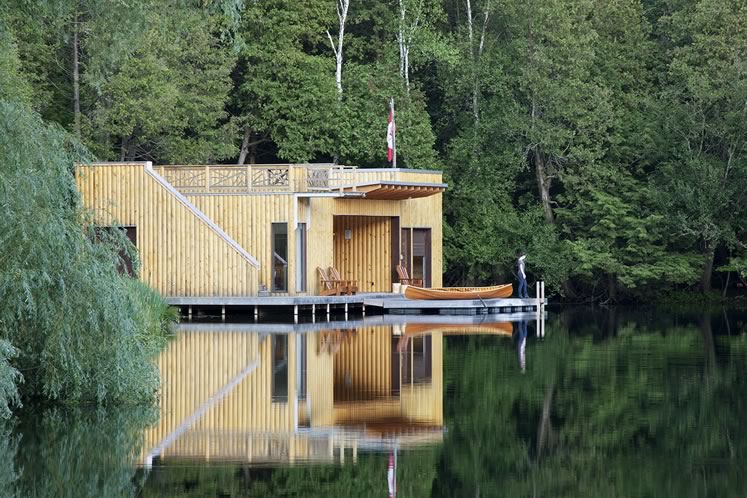 <
►
>
The low-slung entrance to this weekend retreat is designed to leave the wow factor to the soaring glass walls and the views beyond. The interior wood panelling is a mahogany veneer. Photography © Ben Rahn / A-Frame.

There’s nothing ironic, though, about just how much the owners wanted to feel every season – even ones where the boathouse is closed up. “When you’re in that house and it’s a rainy day or a snowy day, you’re still part of the outdoors,” says Peter. “You’re warm, but the rain is falling outside or the snow is falling. At a weekend place you want to feel as if you’re at one with nature. That’s what it’s for – to rejuvenate and regenerate your batteries.”