As daylight fills the evenings, it’s time to think about our camping plans for the summer. Pretty much every summer since my son Adrian could walk and talk, there has been a trip or two “up north” to do some tent camping. 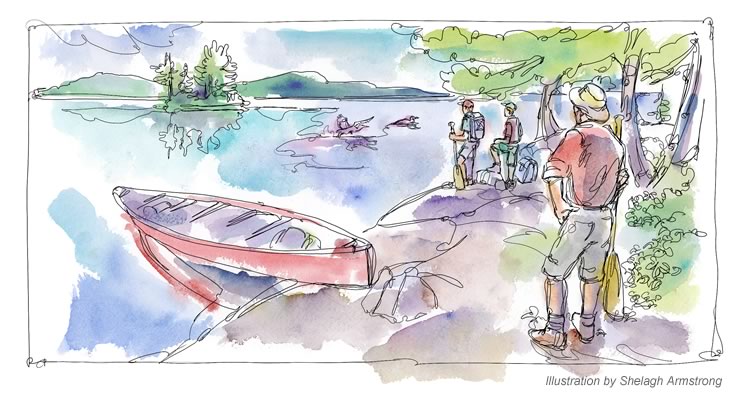 Some trips have been more successful than others. For a few summers we were sure the Farmers’ Almanac was going to have to rewrite its weather predictions: This summer, there will be rain, followed by the summer after and the summer after that. My husband Derrick learned how to set up the tent in the downpours and somehow keep the inside dry (mostly). Loud, crinkly tarps created overhead canopies for the sodden picnic tables, firewood and camp stove.

One time, our friend Chris was determinedly setting up with Derrick in the pouring rain, the kids awaiting food of some kind, watching with big eyes. As Chris cut through a tie of some sort, his knife suddenly slipped, slicing into his hand, dark blood pooling out. A trained first responder, he knew he needed medical attention. Off he went on a long drive to the closest hospital, the kids’ eyes now even wider, while Derrick continued on in the rain.

Other trips have been much easier and brought the hot, summery goodness you hope for when you book your favourite site online.

Canadian Shield and mixed forest have a smell that penetrates your brain, and fresh air drifts in across the water to soothe your overwrought soul. The time melts away and schedules burn up over the embers. I asked Derrick what he liked the best about camping with Adrian and he replied, “There is no clock.” It’s true. You are prepared to give in on bedtime, only to realize you don’t know what time it is, only to realize the kids have already fallen asleep by the fire from fresh air exhaustion.

Camping accommodations can be sketchy to divine. One year, again with Chris and his wife Suzanne, our kids all in tow, we rented a campsite near Guelph. We didn’t know the site was in a community that lived there for six months of the year in trailers, parked in the middle of an open field, with a strong focus on alcohol consumption, and a dislike for tent campers plopped in by their park authority. We were out of there after the first night. On the other hand, we have a few campsites that are favourites, not too far away, where you feel it is just you and the stars and nobody else. Awenda Provincial Park and Georgian Bay Islands National Park are two of them.

Last summer Derrick took Adrian and his friend-who-is-a-cousin Jet to Algonquin. This iconic park is a quintessential stamp on your camp passport if you live here in Ontario. The long drive in, moose warning signs, the authorities in uniform there to greet you – all take me back.

I was lucky to have my Aunt Diane take me to Algonquin during the summers of my preteen years. She showed me how to camp, pack food for days and safely prepare it, and how to swim in inky black waters and dry out on rock outcroppings. We steered a canoe and read maps and read books. She certainly showed me a woman could do anything on her own – I didn’t even think there was a question to be answered on that subject. Our trips only ceased when she put her career of physician on hold to move to Foothills, Alberta to work at Homeplace Ranch as a cook for ranchers and visitors.

Derrick, Adrian and Jet made their way into Algonquin. Over the first couple of days they met some of their neighbours, who turned out to be a travelling group of respected artists, gathered to paint en plein air and follow the routes of Tom Thomson. Later their works would be shown in Toronto’s Distillery District at Arta Gallery under the name “Untamed Things.” And so there they all were, discussing art and history, and sharing sketches and colour-blocked pages in the middle of the forest.

Before their final day, Derrick, Adrian and Jet took our large red Nova Craft canoe out on the waters. The canoe was packed for the long trip through waterways to arrive at Canoe Lake, where Thomson had last been known to travel before his untimely and mysterious death. Food, water, maps. The boys felt the enormity of our landscape and their smallness in it.

They paddled along for hours. The boys commented on the granite walls that lined the waterway, so surreal they appeared to be painted. They pulled the canoe up onto a peninsula where the water body met Canoe Lake. The boys looked around in wonder. Not another person to be seen. As they stepped away from their craft, they proclaimed they were surely the first people ever to walk on that ground. The boys noted the near silence. The only noises came from mysterious animals – predators! – and the swish of water at the edge of the Canadian Shield. Nary a clock ticking.

FUN STUFF TO DO

Discover the connection between satellites orbiting 798 kilometres above Earth and the food on our plate! That’s right, PAMA invites you to learn about space technology that benefits Canadian farmers and sustainable agriculture. The Space to Spoon exhibit highlights the Canadian Space Agency’s Earth observation satellite RADARSAT-2 and its cutting-edge successor RADARSAT Constellation. Great for the space-y kids in your family. The exhibit is on until September 9. pama.peelregion.ca

Stories under the sun

Pack for a picnic with your favourite blanket, a delicious lunch, and bring your kids to Inglewood for stories, songs, crafts and other activities under the sun on July 4 from 10:30 to 11:30 a.m. As a special treat, there are ice cream sandwiches for dessert! This free event is at Inglewood Public Library, 15825 McLaughlin Road. caledon.library.on.ca

Get active, make friends, and have fun at GoodLife Fitness, for free! According to StatCan, the majority of youth in Canada do not meet daily physical activity recommendations. With this program, kids aged 12 to 17 have free access to all GoodLife Fitness Clubs across Canada from July 3 to September 2 daily from 8 a.m. to 4 p.m. A parent or legal guardian must enrol the teen member. The Orangeville location on Fifth Avenue is your closest club here in the hills. teenfitness.ca

It’s messy, it’s loud – it’s everything young boys and girls who love motors and muck could ask for! The mud bog is a place for 4x4s and ATVs to get down and dirty while families cheer on their favourites. A camping weekend takes place August 17 to 19, featuring bonfires, country music and more. Watch the website for details and for the upcoming September mud bog. Sweetpea’s is located on the 7th Line Amaranth. sweetpeasmudbog.ca

Golfing is a great way to get the kids off the devices and introduced to a lifelong sport. Shelburne Golf is well-known for its junior golf program, turning out some of the best juniors in North America. The club is run by someone you may have heard of: Sam Young, a PGA of Canada Class A teaching professional, 2011 Ontario Golf Hall of Fame member, 2002 and 2003 Ontario PGA Teacher of the Year for Junior Golfers, 2002 Canadian PGA Junior Leader of the Year and 2012 Queen’s Diamond Jubilee Medal recipient. Talk about a gem! Camps all summer long. shelburnegolf.com

Are you planning a child’s birthday? A family reunion? Consider a good old-fashioned picnic. Picnics.ca is a one-stop shop for booking picnics, operated by Toronto and Region Conservation. Picnic sites are available across the GTA, with many in the hills, including Island Lake, Glen Haffy, Albion Hills and Heart Lake conservation areas – with some offering group packages.