Knead to Know: At Four Corners homemade dough is the key to the perfect pizza.

At Four Corners Bakery Eatery in Caledon East, head-turning temptations lie in every direction, from a steaming hot table of pasta to a pastry case filled with cannoli and other classic Italian bites. Pizza lovers, however, will fix their gaze on the giant pizza oven tucked into the north end of the sharp new space. A tower of white pizza boxes stands in wait. Up to 80 pizzas a day take shape on the nearby granite counter and spend just three minutes in that stone oven before heading to a table or a takeaway box, piping hot. 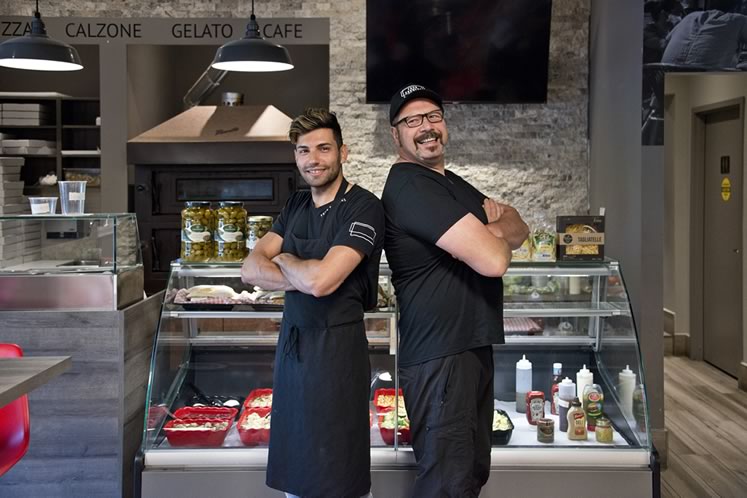 Pastry chef Graziano Fazzolari (left) and chef Filippo Rancati each put their own spin on pizza. Filippo handles the savoury and Graziano brings the sweet, such as the Nutella and strawberry dessert pizza. Photo by Pete Paterson.

In the spacious back kitchen on a recent Friday, chef Filippo Rancati, who recently moved here from Emilia-Romagna in northern Italy, is mixing up a batch of pizza dough in a commercial mixer, enough for 35 pizzas. (We’ve modified his recipe for home cooks.) Owner Joe Agostino says there are numerous methods for making dough, but he’s embraced the recipe Filippo brought with him from Italy, which uses less yeast than Joe’s own recipe, among other differences.

While this batch rests to rise, Joe and Filippo step out to the generous granite pizza counter to roll balls of finished dough. Then they pull and stretch the dough by hand, a method Joe says is superior to machine-rolled pizza dough because the dough retains its bounce. “It’s more fluffy,” he says.

The dough prepped, Joe and Filippo are making a simple basil-topped Margherita pizza, with buffalo mozzarella for the ooze factor and a simple tomato sauce that’s almost too simple to be believed. Joe reveals the secret with a broad smile: It’s never cooked, just blitzed in a blender. He recommends canned San Marzano tomatoes (with their juice), some garlic, parsley, a drizzle of olive oil and pinches of sugar and salt – that’s all. 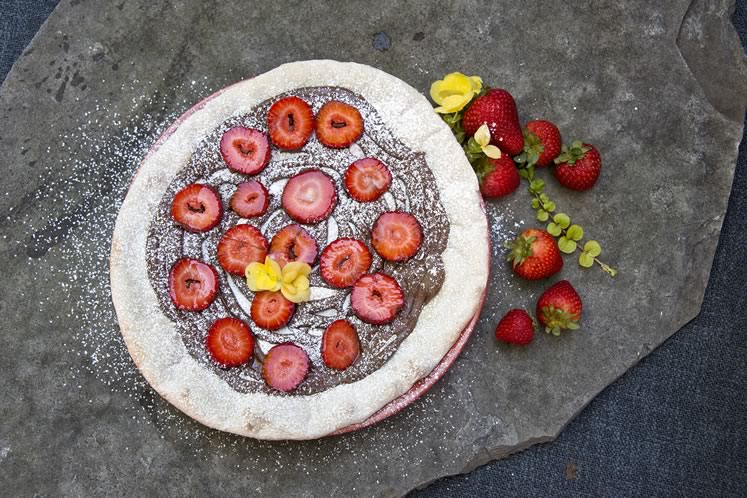 Pastry chef Graziano Fazzolari brings the sweet pizza, such as the Nutella and strawberry recipe. Photo by Pete Paterson.

Now, if you’ve never considered pizza for dessert, pastry chef Graziano Fazzolari, who hails from Calabria in southern Italy, shares another classic. After baking the crust in the oven sans toppings and allowing it to cool for a few moments, Graziano pipes on rings of Nutella and tops with strawberries and a dash of icing sugar. It’s so heavenly it just might replace your own signature dessert.

Indeed, changing eating and cooking trends have been good for the family business, started by Joe’s parents 30 years ago in Woodbridge. Bolton’s Four Corners opened in 2011 and the Caledon East spot debuted in April 2017. In his parents’ day, the business was centred on bakery and deli offerings. Now it’s broadened out to the current model. “People used to cook more,” he says, happy to step in with real Italian fare that maintains its culinary lineage through Filippo and Graziano. 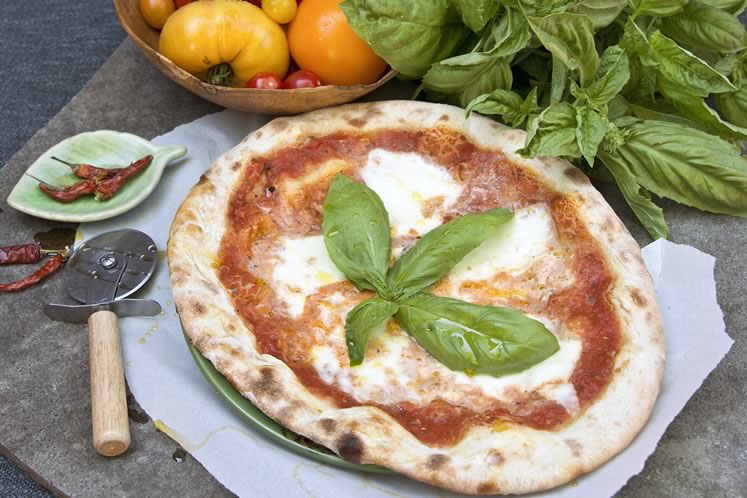 “It gives you that feeling – it brings an authentic feel to the place,” he says. “It makes a big difference, let me tell you.” 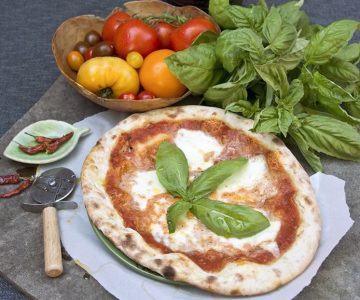 How the Experts Make Pizza Dough

Light pizza dough is at the heart of Four Corners in Caledon East. It’s the base for everything from a simple Marghertia to a decadent dessert pizza.