Live entertainment flourished in these hills a century and more ago. Before new technologies like the cinema changed everything, the stages of our local town halls were filled with performances that appealed to every taste. 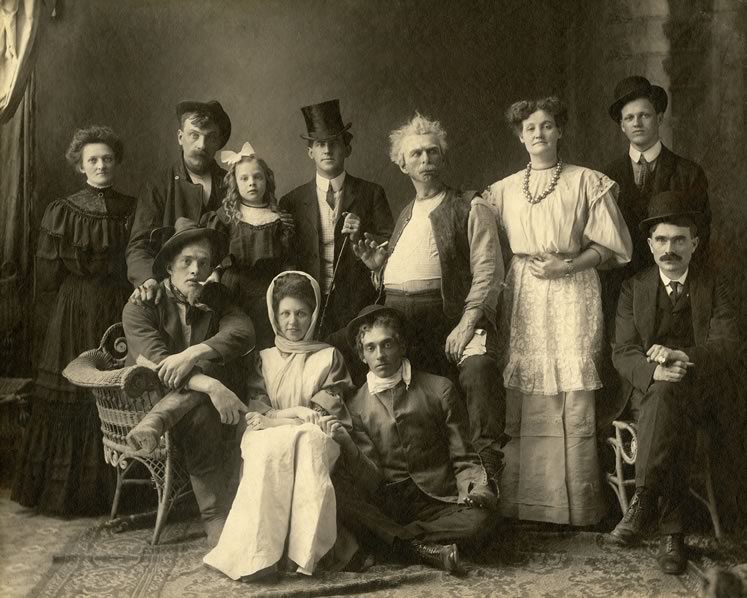 The promotional photo above shows the cast of Ten Nights in a Bar Room. The play, based on the 1854 novel Ten Nights by American author Timothy Shay Arthur, was presented with great success in 1908 by the Grand Valley Dramatic Club. Local performers filled all the roles, but in the hands of a talented director like William Jenkins (seen upper left with his wife and daughter), amateur productions like this rose to professional standards. 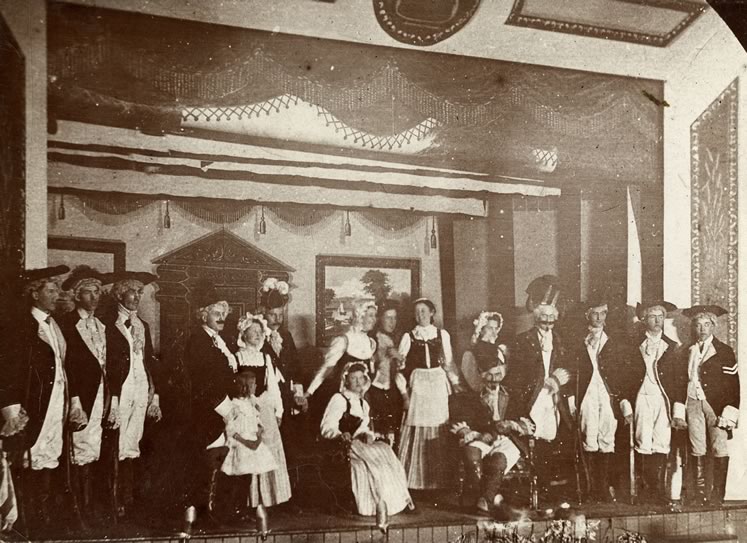 Live entertainment in these hills was no small, amateurish matter as the production photo above of Gilbert and Sullivan’s HMS Pinafore at the Shelburne Town Hall (ca.1910) makes clear. To present a worthy version of such an ambitious musical required not only a large cast and crew, along with elaborate costumes and set decoration, but also plenty of talent.

The theatre in Shelburne’s impressive town hall was well known for its grand productions. Also around 1910, the St. Paul’s church dramatic club put on Tennessee’s Partner at the town hall. The four-act play called for a big cast and a complicated set to accommodate the many scene changes – which involved shootings, a near-hanging, a happy-ending love scene, and more.

Wanda the Mystery Lady and other vaudeville delights

At Orangeville’s Red Rose Theatre, touring performers, like mind reader Wanda the Mystery Lady, appeared for one-week stints throughout the first decade of the 20th century. A hundred years later, the racism and other social prejudices that permeated much of the early vaudeville style are deeply offensive – and the Red Rose hosted a few such productions. In February 1909, for example, a blackface act was followed shortly after by a “rube” imitator. Both acts pulled in large audiences, but to its credit the Orangeville Sun was not favourably impressed. The Sun, which faithfully announced and reviewed the Red Rose acts, took pains to tell readers that the next performers, a song and dance duo called Rogers and Bumstead, would provide “clean, wholesome entertainment, free from the least shadow of vulgarity.”

The Red Rose Theatre (about which few records survive) may have unwittingly sown the seeds of its own demise. Besides vaudeville it showed “pictures,” early versions of what would soon become the silent movies of the developing cinema era.

While homegrown talent starred in the drama and concert productions of the day, “imports,” often from a nearby community, ruled when it came to the many serious lectures regularly offered around the hills. Community churches often secured the speaker and provided the venue for these. And the topics could be controversial, as attested in May 1908 by the experience of Reverend Harton, an import from Tottenham to the Methodist church in Bolton. While he held forth inside on his subject, “Why I left the Church of Rome,” his horse and buggy were being vandalized outside (“by rowdy hoodlums from Tottenham,” according to the Bolton Enterprise).

That same spring, a range of more neutral topics was heard across the hills. “Our National Heritage,” for example, was offered at the Science Hall in Alton, and a presentation on tuberculosis was given at St. James Anglican Church in Caledon East and Mann’s Hall in Camilla. At the opera house in Orangeville, citizens could attend a lantern slide presentation on travel in Europe. The seats at such events were always filled it seems, an indication of a genuine desire for knowledge. 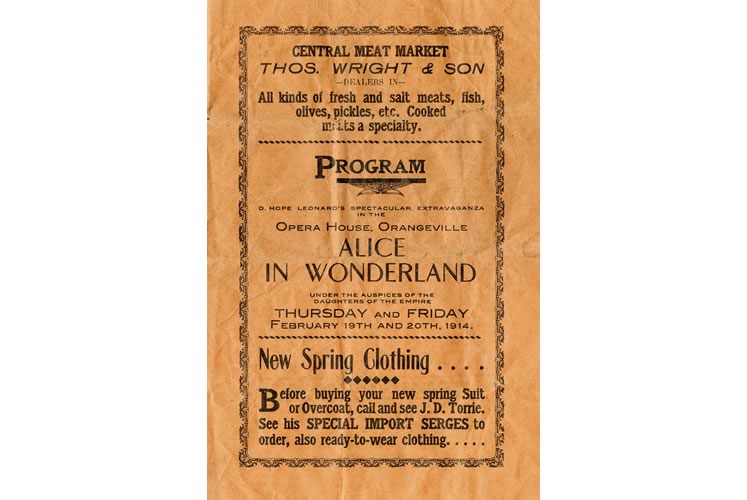 Lavish dramas put on at the opera house by Orangeville’s branch of the IODE (Imperial Order Daughters of the Empire) invariably played to a sold-out house. Note the ads on the program above – in that regard, very little has changed in a hundred years. 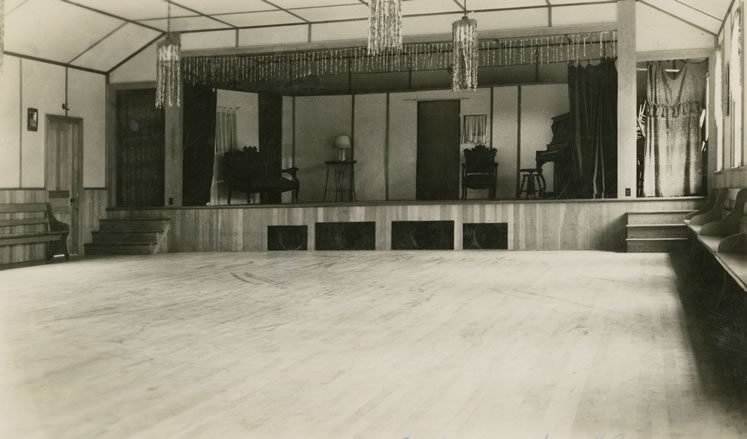 Community halls such as the one above in Horning’s Mills (ca.1925) served many purposes a century ago, and were often the venue for plays and other performances. The stage appears to be set for a domestic drama or comedy, but the cleared floor suggests the next event may be a dance. (Note the benches along the side walls. In many halls, these were former church pews.)

While town hall dances were once a regular feature of community life, some were more special than others. A 1906 masquerade ball in the Caledon Village hall, for example – couples only, masks required – charged a hefty $1 admission, but that paid for an orchestra imported from Toronto. 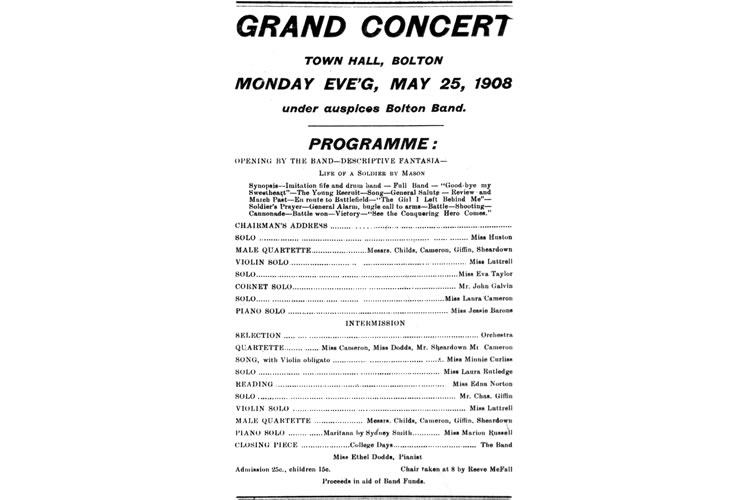 Concerts by citizen bands, most often held in community parks, were common occasions in the early 1900s, but an indoor concert, like the one advertised above, enabled bands, typically all male, to include local female talent, usually singing, playing a solo instrument or doing a recitation. At this Bolton concert, more than half the performances were by women. 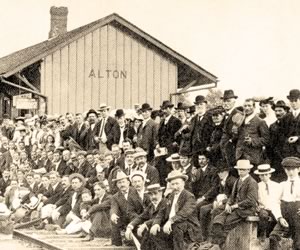 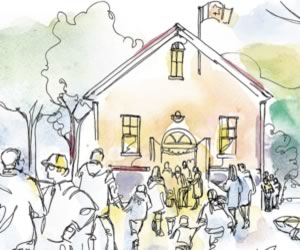 A Hymn to the Small Hall

The community hall is one of the very last places where we are allowed to get together and make something out of nothing, just for the fun of it.