The Georgetown fox family is lucky to be living in an older section of town where yards are spacious and tree filled.

This spring I’ve had a great time watching a fox family in Georgetown. The parents dug a den under an old garage and produced nine kits. As of this writing, eight of the nine survive and are almost as large as the adults.

I celebrate their success. We banish living things when we build our towns and cities. Many birds, mammals and other vertebrates can’t eke out a living amidst our concrete, asphalt and neatly trimmed lawns. That foxes can do this is heartening.

Another fox family has been in the news this spring. This one at Woodbine Beach in Toronto has its den under a boardwalk. Predictably these foxes have attracted the attention of the throngs of people who walk the beach. 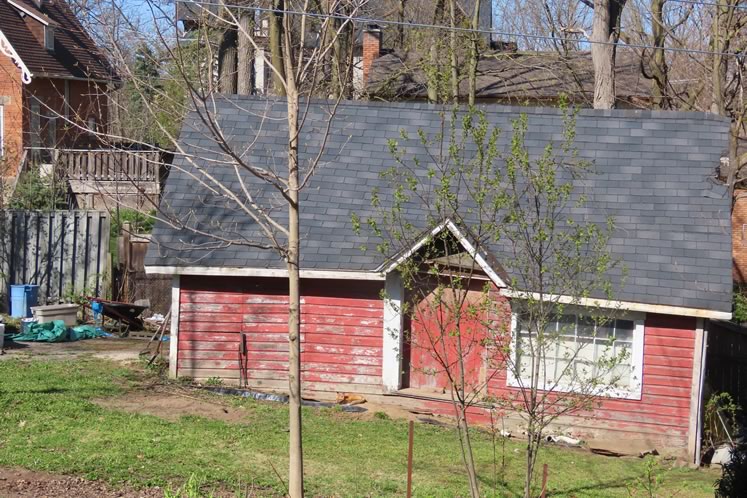 The den is located under this garage. Photo by Don Scallen. 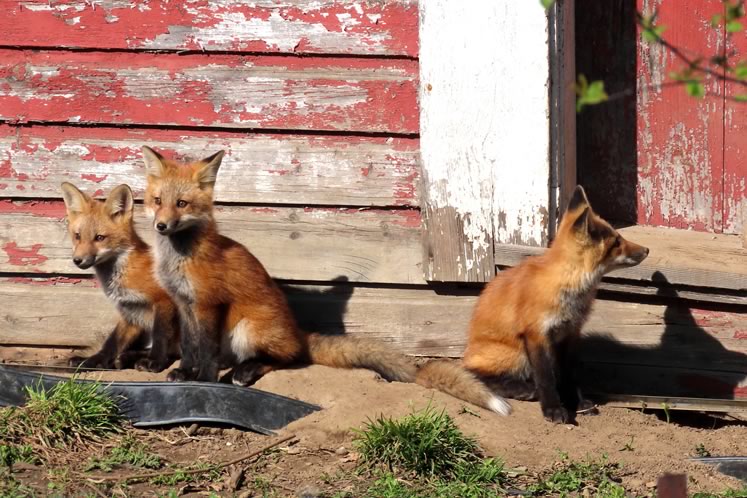 Red fox kits by their den entrance under an old garage. Photo by Don Scallen. 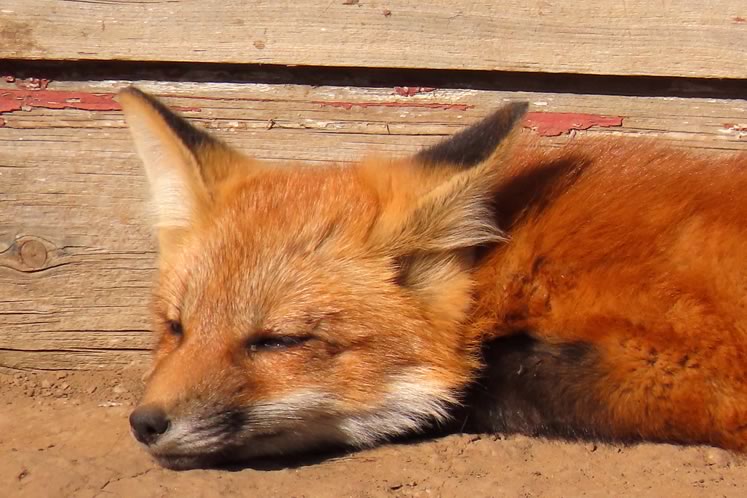 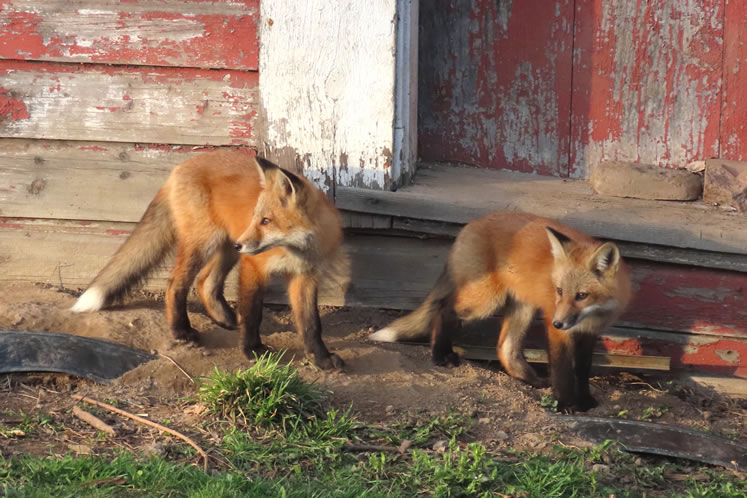 Kits reacting to passersby on a sidewalk. Photo by Don Scallen. 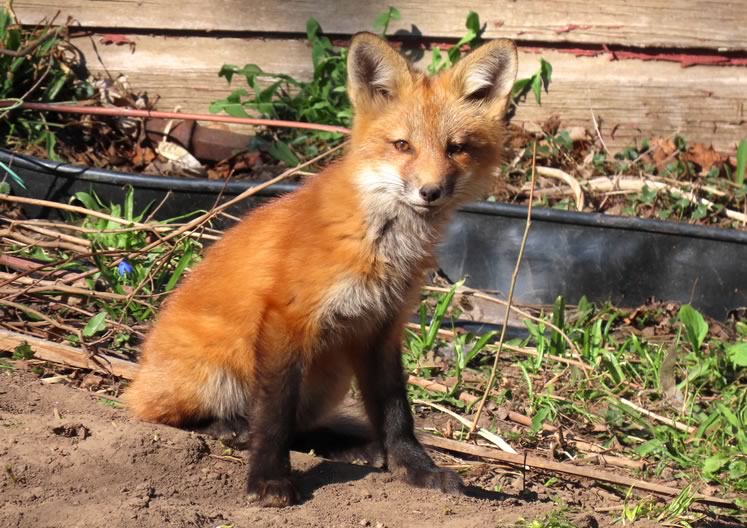 Kit watching me as I sit on a porch about 25m away. Photo by Don Scallen. 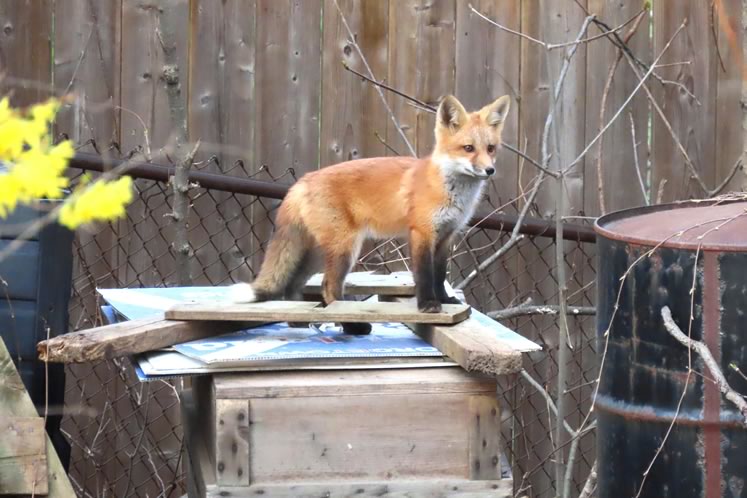 A kit surveying its domain. Photo by Don Scallen. 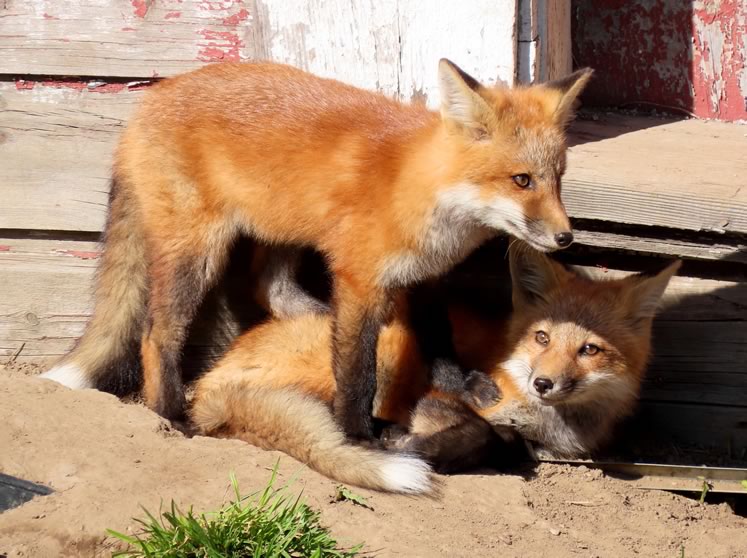 A brief respite from play fighting. Photo by Don Scallen.

Many are content to watch the Woodbine Beach foxes from a distance. But the selfie seekers come too close. Others feed them. The result? The foxes lose their prudent fear of people, and that doesn’t bode well for their long-term survival.

The Georgetown fox family is lucky to be living in an older section of town where yards are spacious and tree filled. The den is on the property of an elderly gentleman who speaks to the kits gently as they bask in the evening sun or chase each other around his yard.

They are the talk of the neighbourhood and most residents have respected their space, allowing them to move freely through yards and gardens as they hunt squirrels and rabbits. The foxes have thrived in this atmosphere of acceptance and their human neighbours have thrilled to their presence. Both foxes and people have benefited.

As more animals attempt to live among us, we will need to consider appropriate rules of engagement. We can co-exist with many of them if guided by a live and let live attitude. 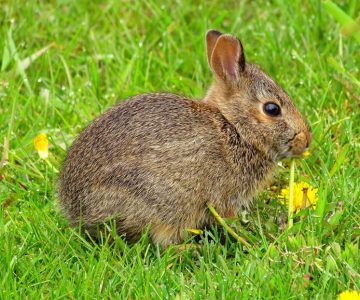 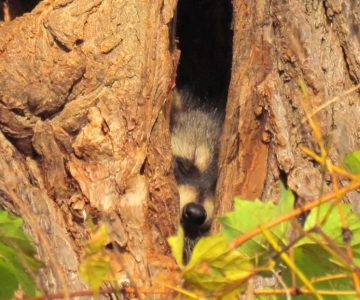 Squirrels, racoons, owls, chickadees, and many other creatures find safety and shelter within trees. 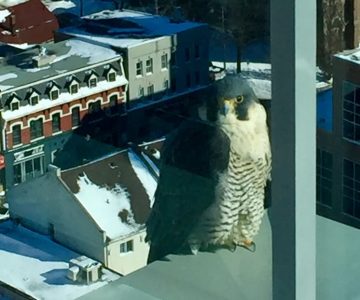 Raccoons, squirrels and robins adapted to urban life long ago.