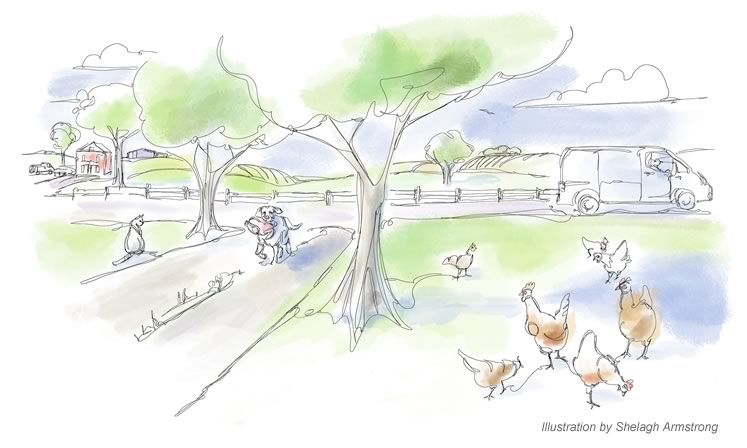 In the first few days after the order to shelter in place, our two sons returned home and prepared to ride out the pandemic with us. Our new normal included regular sit-down family meals with the two girls joining us from Calgary and Grande Prairie on FaceTime. Family dinners have become a rarity over the past few years, but the national emergency brought them back with a rush. There were lots of questions and very few answers to offer at that point, but my wife said very firmly that the most important thing we could all do was look after each other as best we can.

My big livestock protection dog, Dexter, was sitting with us listening attentively as he always does. The very next day he went out on his morning patrol and brought back a turkey. I don’t mean a mouldy wild turkey carcass from the woods. This was a shrink-wrapped, 10-pound, Grade A Butterball from Walmart. I called around the neighbours to see where he might have found it, and old John McKee said, “Danny, that’s a good dog. I think he is possibly a breeder. Did he eat much?”

“That’s fair,” said John. “It’s about 15 per cent, which is a reasonable finder’s fee. He’s doing curbside pickup for you.”

That’s one way to look at it. Some might call him a porch pirate. Dexter has a milk and cookies route he follows every day around the Ninth Concession no matter the weather. It takes him to every corner of this farm and the ones next door too. He wants us to believe he keeps us safe from coyotes, but this is a harmless fiction. The truth is he craves news and gossip as much as any of us and he makes more effort to find both. He is snow-white and majestic, and his long legs cover ground effortlessly. He seldom comes when called, although he does stop when he hears my voice, even if he is 500 yards away. He waves his tail enthusiastically, woofs and carries on his way. When he does finally come home, he sits on the hill across from the house in the sheep pasture and sings for about 10 minutes – or as my wife says, he “hoos.” It is a joyous sound and it has given us a special comfort over the last two months.

His head is just about even with the side mirror on a car and newcomers to the farm are startled when he leans in the window and asks, “Are you comin’ in for a bit? She just made biscuits!” He has never been a guard dog and is mystified by this business of social distancing.

He finds the best vantage for keeping an eye on the neighbourhood is from the master bedroom which looks out over the pastures and the bush. The second-best place is right in the middle of the road at the end of our lane, where he lies for hours at a time. Fortunately, traffic is light on the Blind Line and the neighbours have been driving around him for many years without complaint.

In this household we often ask the question, “Why can’t you be more like Dexter?” Why can’t you just drop the bag of hammers and find something to be delighted about? This question has popped up frequently during the past weeks of enforced isolation. Why can’t we rise with the sun, trot out to the sheep pasture, sit down and sing a song of praise and thanks for the beauty and the endless distractions of this corner of the earth?

I have some difficulty following my own advice, now that every theatre is closed and I have no engagements for the rest of my life. I am reading about people in downtown condos taking advantage of the lockdown to learn jazz piano or finally figure out how to podcast, and it all sounds very creative and therapeutic. But thankfully, I live on a small farm, which is a jealous mistress and wants your undivided attention. The farm cares nothing for pandemics and stock market meltdowns because this is a new growing season with a whole set of rigid deadlines and many moving parts. It requires my constant vigilance.

This morning, Dexter brought home four sausages and a French loaf. He’s going to get me into trouble.