From Soil to Table

If you were ever to experience a food shortage, Karen Hollingshead would be the perfect next-door neighbour.

With the help of her dehydrator, steam juicer, vacuum sealer and pressure canner, her densely planted 800-square-foot garden feeds not only herself and her husband, Steve, but also both sets of their parents, with plenty left over to share with friends, neighbours and the odd lucky bunny.

To minimize both watering and weeding, Karen intentionally keeps her garden plot compact. Everything within its boundaries must offer something of value to earn its place. “Whether it’s for shade, as a pollinator, a companion plant or as a food source, everything in the garden has a purpose,” she says. “Being just a pretty face doesn’t cut it here.”

At 60 and recently retired from a career in marketing and communications, Karen says the “homesteading thing” has always been influential in her life. She and Steve grew up in King Township, met in Grade 10 and have been together for 45 years. They designed and built their current home high on a sun-washed Caledon hillside when they were in their mid-20s, taking the DIY approach every step of the way. 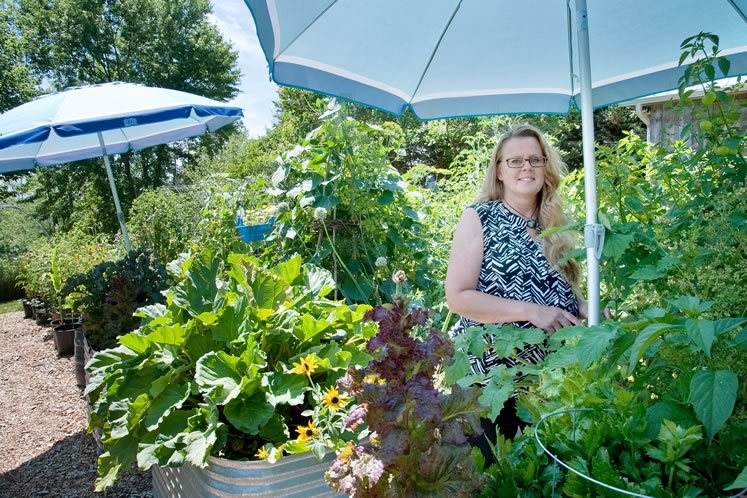 Karen’s fascination with gardening was sparked by happy childhood visits to her Danish grandparents’ home in North Toronto where she enthusiastically helped with the annual fruit and vegetable harvest, as well as the preserving rituals that followed.

She refers to her current garden as transitional. In anticipation of a future when bending over to tend it might be a problem, she sourced galvanized steel raised beds (made by Conquest Steel on Rivalda Road in Toronto) to add to the three water-trough containers she had already been using. The bottomless 8-foot x 3-foot x 30-inch steel containers allow water to drain and earthworms to come up through the soil.

Thirty-five varieties of tomatoes grow in the garden, some obtained from a seed exchange and some from seeds saved from previous crops.

Karen thinks of the currant, or spoon, tomato as the caviar of tomatoes because of the tiny bursts of flavour each produces, but her most treasured tomato plants are the heirloom bonny best. Their seeds had spent 30 years in a napkin before her aunt discovered them and gave them to her.

Settled in a special place in the garden, the nine bonny best plants produced about 150 pounds of tomatoes in one exceptional year and regularly provide a bonanza Karen transforms into purées, salsas and sauces. The variety has also won her prizes at the Bolton Fall Fair.

One of Karen’s busiest times of the year is the six weeks from St. Patrick’s Day to the end of April while the maple sap is running. During that time she regularly puts in 15-hour days making syrup for her family, friends and the neighbourhood.

Using a three-burner propane stove set up on her driveway, Karen distils 43 litres of sap for each litre of the final product. She collects sap from her own trees as well as neighbourhood maples, and doesn’t limit herself to hard sugar maples. She also collects from soft maples such as silver maple, Manitoba maple, Norway maple and crimson maple, as long as they have a diameter exceeding 10 inches. She says soft maples produce a milder, buttery-flavoured syrup.

Her best year to date was 2019, when she produced 55 litres of finished syrup processed from more than 2,000 litres of sap.

Every tree and bush on the property has a history. “The gooseberries and red currants were transplanted from my grandparents’ house, and some of the maples were rescued as saplings from a parking lot. My family never wonders what to give me for my birthday or anniversary. They always hit a home run with a fruit tree,” she says with a smile.

A huge fan of vertical gardening and a dedicated recycler, Karen uses both concrete reinforcing mesh and 16-foot galvanized hog fence panels, bent into half-circles, as trellises. She also recycles plant pots, thereby extending her garden’s area, and even has a few loofah plants growing among the cavalcade of vegetables climbing her trellises.

Bucking tradition, Karen grows both her carrots and her potatoes in individual containers placed randomly throughout the garden. At harvest time she simply bangs the inverted pot into a wheelbarrow and picks out the produce.

Near the garden grows a 4-in-1 apple tree. Its grafted branches produce McIntosh, Granny Smith, golden delicious and Cortland apples. “It just makes sense and saves a tremendous amount of space,” says Karen. She has also scoured roadsides for wild crabapple trees and grafted scions from them onto apple trees in the remains of an old orchard on her property.

Happiest when she is in her kitchen, Karen remembers her first success as a cook was a salmon loaf she made for her family when she was seven. She hasn’t looked back. 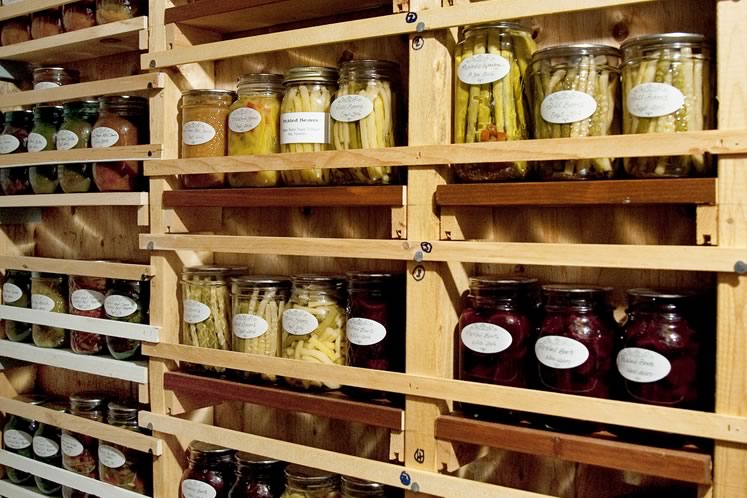 Making good use of her juicer, dehydrator and pressure canner, she annually “puts down” more than 300 jars of homegrown fruit and veggies, turning them into pickles, jams, jellies, sauces and mustards, as well as jars of mixed dehydrated offerings ready to add to stock for soups. She stores her canned goods in a cold cellar and fills three freezers every year.

“I give away as much as I keep, never have to buy fruit and vegetables during the summer months, and Christmas giving is never a problem,” she says.

Especially during the coronavirus pandemic, Karen has been more than happy to head for her garden, rather than the grocery store, when she’s ready to cook.

And she finds her neighbours are more than willing to share their harvests. Two neighbours with pear-laden trees, for instance, are delighted to exchange their crops for some of her preserves.

Karen is currently experimenting with flavoured vinegars. Her favourite at the moment is the chive blossom version she makes using white balsamic or white wine vinegar.

She rinses the chive blossoms, puts them in a mason jar with the vinegar, waits a couple of weeks, runs the liquid through a coffee filter, and voilà, she has a pretty pink chive-infused vinegar.

In addition to gardening, Karen has a fascination with genealogy, originally sparked by a high school family tree project. Now an accomplished researcher, she has traced the Quaker roots on her husband’s side to the 1680s in North America and even farther back in England. She is currently helping Steve write a book detailing the Hollingshead family history. 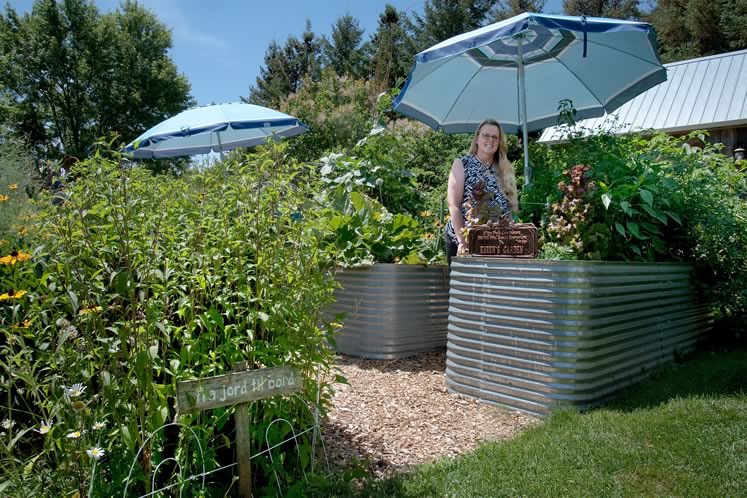 A hand-painted sign in Karen’s garden reads in Danish “Fra jord til bord” – “From soil to table” – a tribute to her own origins. She feels the roots of her passion for growing, harvesting and preserving extend deep into her farming heritage, with her garden providing a living link to ancestors who lived from the land. With a similar goal of self-sufficiency, she takes pleasure in the sustenance her garden offers: “It’s an adventure to help things grow. My garden is a happy and giving companion.”