Through the woods, up the hills, down the valleys, the popularity of trail running races is surging in Headwaters – and this competition is all about fun.

For most active kids, trail running doesn’t need a name – it’s just the natural way to navigate a forest path. As a sport that has been taken up by adults, however, trail running gets called cross-country running, mountain running, hill running, fell running or even, in German, traillauf. But no matter what the moniker, this sport combines hiking and running – so maybe “hunning” or “riking” or “runking.” It usually involves trotting along flats and scrambling up and down hills.

Yes, hills are part of the fun, which makes the rolling landscape of Mono and Mulmur, as well as the local residents’ fun-loving friendliness, a hit with trail runners from across the Greater Toronto Area and beyond. 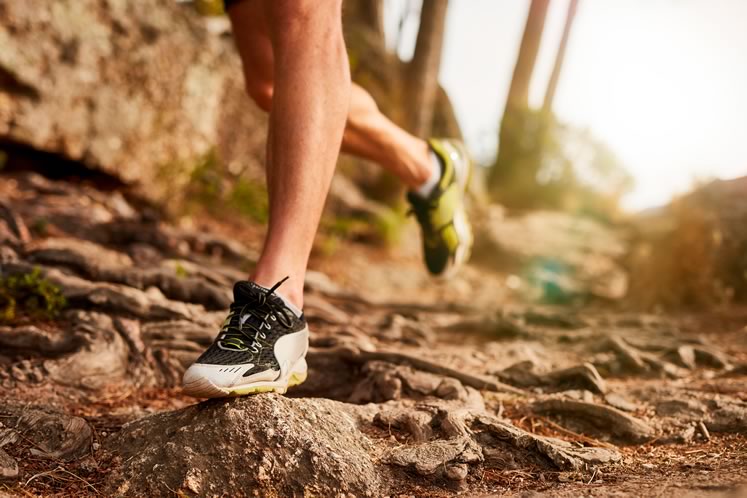 The enjoyment of being in nature is a common thread among trail runners. Erin resident Neil Baird says, “I’m happiest when running on the trails. It’s something that uses all my senses.” Given a choice between running indoors on a treadmill or outside in −20C weather, he would always choose the latter.

And Creemore resident Kathy Webber, who organizes trail runs called North of 89 Outdoors, or N89, often slips on her trail-running shoes early in the morning. “Watching the sun come up over the hills and hearing the birds waking up. That’s a gift,” she says.

Officially, the International Trail Running Association, founded in 2013, defines the sport as a pedestrian competition that takes place in a natural environment. The association came about because of a global surge of interest in the sport. Between 2013 and 2019, 195 countries hosted 25,700 competitions with a total of about 5 million entrants. And though the pandemic put a damper on competitions, the sport seems to be bouncing back more strongly than ever. This season, at least eight trail-running events are already in the works in Dufferin County alone.

Three of these competitions will take place at the Mansfield Outdoor Centre, where Johnny Yeaman and a team of volunteers, mostly from the mountain-biking community, have been working to revive 20-year-old overgrown trails and open new ones on the hill-rich property. Along with his wife, Karen, Yeaman is best known as the force behind the Team Van Go mountain biking club, but he is spearheading the preparation of trails for a host of both trail-running and mountain-biking events.

When Covid forced the cancellation of most competitions in 2020, Jodi McNeill, well-known proprietor of the now-closed Running Free store in Orangeville, found it hard to get out running. “There are people like my husband, Norm, who just run; then there are people like me who need the motivation of competition,” she says. “In 2020, I nearly didn’t run at all. Why bother if there’s no race in my schedule?”

Rather than becoming a couch potato, however, McNeill changed gears. In 2021, she resurrected as virtual events a trio of Gotta Run Racing trail-running competitions she had been organizing for some time: The Rainbow Trail Run, the Island Lake Classic and the Chase the Coyote Trail Race. Even before the pandemic there had been a virtual option for Chase the Coyote. Runners didn’t need to turn up on a specific day; they could complete the course at their leisure and then send in their results. They still had to enter and were still eligible to win prizes and, of special importance to McNeill, they still got swag.

McNeill loves the swag, or the Stuff We All Get, that comes in a race kit. Generally, it comprises promotional material and free products, ranging from shoelaces to a hat or gloves. She puts a lot of effort into what goes into a Gotta Run kit, saying, “The worst swag is an ill-fitting T-shirt.” On the other hand, one of the most popular items she included in a 2016 race kit was a trucker hat. “We still have people asking if we have any left to purchase,” she says.

Webber, too, loves swag. After organizing virtual-only events last year, N89 will launch its first in-person event on June 4 this year. The in-person component of the Great Mansfield Outdoors race will take place at the Mansfield Outdoor Centre and offer distances of 5 kilometres, 10 kilometres and a half marathon (21.1k). The swag will include prizes made by local artists, local food and, importantly, local breweries. Four breweries have already signed up, including Creemore Springs and Caledon’s Goodlot Farmstead Brewing Co. Flights of their local brews will be offered as part of the post-race festivities. A 6k virtual version of the race will take place at the Main Tract of the Dufferin County Forest.

Like the events organized by McNeill, the Great Mansfield Outdoors race is a chance for trail runners, their family and friends to enjoy a great day in Dufferin’s hills. These competitions are more about crossing the finish line and having fun than about posting the fastest time.

Camaraderie is also an important aspect of the sport. Steve Hunter leads the Dufferin Dirt Runners, a group of trail runners who meet weekly to head out together. Participation bloomed during the pandemic. “2020 was our biggest year,” says Hunter. “On our largest nights, we had 40 runners.” As a result, he separated runners into three groups: fast, faster and fastest. Despite his focus on fun, he says, “No one wants to be in a ‘slow’ group.”

At 6 p.m. on Thursday evenings from May to October, the runners meet at a different spot near Orangeville for a 5k to 8k run followed by a chance to socialize and share stories. Every March 14 – or 3.14 – the group holds a “Pi Run.” Afterwards, they enjoy a variety of sweet and savoury “pi(e)s,” including pizzas. On Truth and Reconciliation Day, the Dufferin Dirt Runners wear orange, and on Canada Day they sport red and white.

Trish Teeter of Erin doesn’t worry much about pace, but she is a bit obsessed with distance. Since starting out at one of Running Free’s learn-to-run clinics, Teeter has graduated to what’s referred to as an “ultra” distance: anything more than a marathon (42.2k). In October, she’ll enter her second 50k trail run. 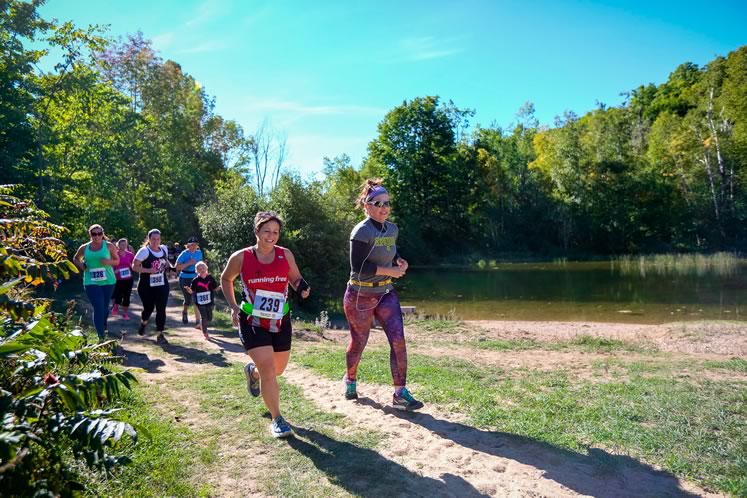 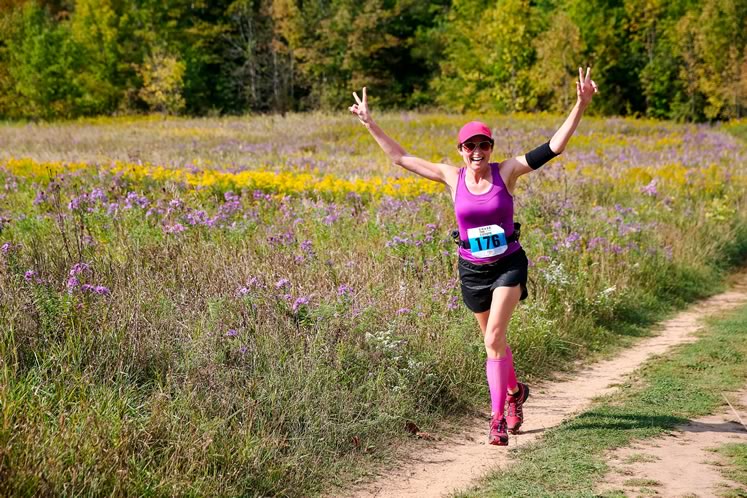 An enthusiastic runner is colour-co-ordinated with the wildflowers. Photo by Sue Sitki Race Photography. 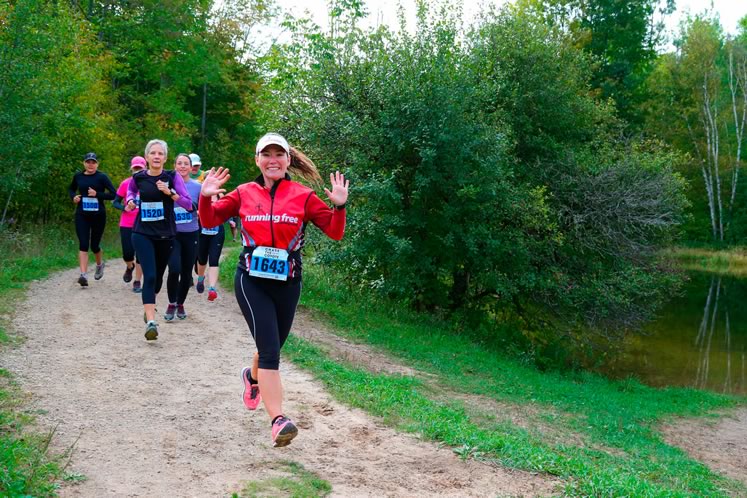 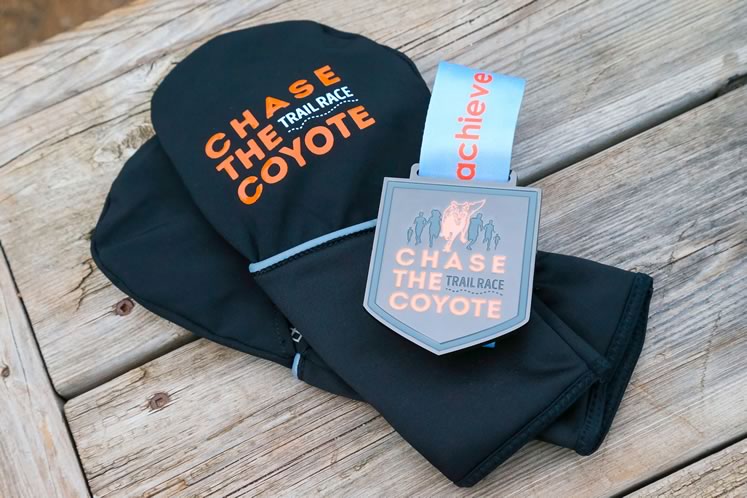 Race swag is part of the fun. Photo by Sue Sitki Race Photography. 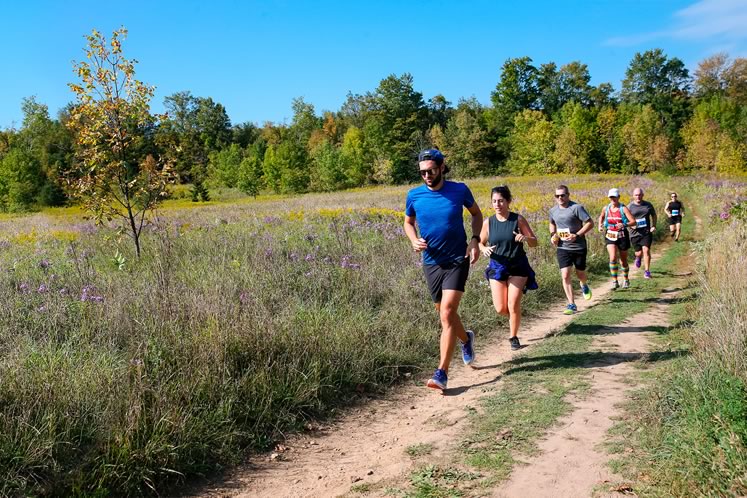 Ditto Baird. He recently signed up for the 50k option at McNeill’s Chase the Coyote Trail Race, which will take place in Mono Cliffs Park on September 17. Runners have eight hours – yes, eight hours – to finish the course, nearly twice the time needed to run this distance in a road race. Winning is not on Baird’s radar. His goal, he says, is simply to finish. “I would be happy to be listed as DFL [or dead f-ing last] rather than DNF [did not finish].”

McNeill acknowledges her emphasis on experience rather than speed is not unrelated to the fact that she isn’t a particularly fast runner herself. “I don’t see a whole lot of podiums,” she says. She’s drawn to fun events, ones that have a theme, which accounts for the latest addition to the lineup of Gotta Run competitions.

The Lost Treasure Trail Race debuts May 14 at Mansfield Outdoor Centre. What gives this race an extra sparkle is a little-known story about Jesse James – yes, that Jesse James, the outlaw. According to local lore, James hid out for a time in Dufferin County and left his gold buried on a farm near Mansfield.

On hearing this tale, McNeill got a bit of gold fever herself. More important, she had the theme for a new race. And what could be more fun than coming up with treasure-themed swag? The race medals, for instance, resemble gold coins, and the ribbons are stamped with either 5k or 10k, the distances you can choose to run in person on May 14 – or anytime virtually if you can’t make it to Mansfield on race day.

Being a race director is a lot like managing a running store, says McNeill, only better. “It’s more fun because when we sold a pair of shoes to someone who was training for their first marathon, we didn’t always get to hear how their experience was,” she says. “Whereas at the races, we work and plan for months in advance, and then it all culminates at the finish line where we get to see the joy – and sometimes pain! – on their faces as they finish and receive their medal.” She adds, “After all, we really are in the experience business.” 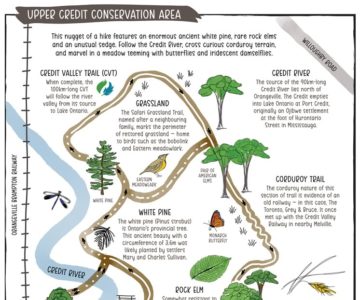