Letters published in the WINTER 2007 edition of In The Hills magazine.

Kudos to Ken Weber on his “Strike Up the Band!” article in your autumn issue. I note, however, that no band from Caledon Village was mentioned. By happenstance I recently discovered this photo of a Charleston Band among those in a strong box that long-time Caledon resident Alex Raeburn has left with me – it contains a collection of his father, Sam Raeburn (b.1883, d.1984).

The photo is undated but I showed it to Peel archivist Diane Allengame and she estimated by the clothing that it was from the early 1900s. I found a notation in the minutes of Caledon Township of March 26, 1901 that allowed the Charleston Band to practice in the Town Hall not more than twice a week until the 15th of May. The members of the band were to furnish wood and oil.

Alex Raeburn, who will be celebrating his 95th birthday on Nov. 26, confirms that his father played a number of instruments, including the French horn, in the band as a young man, and he identified Sam Raeburn in this photo in the back row, second from the right.

Alex also believes that Dr. William Stubbs (b.1844, d.1926) is in this photo in the middle row, second from right. His obituary records: “In addition to taking an interest in politics and veterinary science, the late Dr. Stubbs was also interested in music, and in the early 1870s he played an E-flat tenor in the Orangeville band, and later he started a band in Charleston.”

Alex recalls his father’s story of greeting the turn of the century by marching in the band through the village on a frosty January 1st with their instruments frozen to their lips and having to stop in homes along the way to thaw out.

As Ken Weber noted, most communities had an Orange Lodge which celebrated the 12th of July with a fife and drum corps. This was true in Caledon Village where its LOL 250 paraded annually from 1847 throughout the streets. In her memoirs, the late Lorna Hillyard Little recorded that Lodges throughout the district held their big parade in a different town each year. Lodges and bands from many communities formed the parade, each carrying their identifying banner. There were bagpipes, brass and silver bands, trumpet and xylophone bands. As a daughter of a past master of the Warnock Lodge, she was proud to be part of that fife and drum band in the 1940s. She noted that the band needed no music as they all played by ear.

As an aside, I recently met a friend from Alton who was so happy with this article by Professor Weber because it included a photo of the Honeywood Band in 1916 and she recognized her grandfather and his brother among the band members.

May the bands play on! 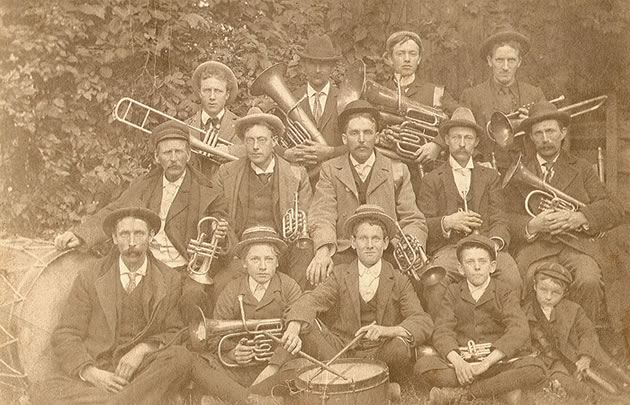 Sam Raeburn (back) and William Stubbs (centre) played in the Charleston band.

As an East Garafraxan, I found your report on the township interesting and informative. However, when the author claims that the only two Amaranth-East Garafraxa concession roads that align are the 4th and 19th respectively, he is mistaken: those two roads are offset like almost all others.

East Garafraxa’s A Line was recently adjusted to align with Amaranth’s 3rd Line at Highway 109, and the East Garafraxa 13th Line aligns with the East Luther-Amaranth Township Line.

Real curiosities are East Luther-Grand Valley where concession roads run east-west and sideroads north-south, and Melancthon, which appears to have been surveyed by a committee of strangers.

A New Band in Orangeville

Orangeville has not had a band for many years and a group of concerned citizens/musicians felt that the start-up of a new band was long overdue. The community has grown immensely over the past twenty years and there must be numerous people in the county that play or have played a band instrument.

After several months of discussion and planning, we have taken the first steps to make the community band a reality again. Musicians come from Orangeville and several surrounding communities and range in ages from high school to the golden years. Veteran musicians provide wonderful leadership and inspiration for the younger players. There is no generation gap here: music has a way of bringing all ages together within the common bond of music-making. Members gain satisfaction from striving for excellence as performers as well as enjoying comradeship in an ensemble. A musical group such as this no doubt fills a musical need in the cultural life of our community.

The community band has just started rehearsing and is trying to reach players who may be interested in joining. There are many musicians out there who simply need a purpose to dust off their horn and get back into playing. We are in the building phase and we expect healthy musical growth in this ensemble over the long term.

If you love music and would like to share your talent in chartering this new musical ensemble, then please make a point of meeting with us on Thursday evenings, 7-9 p.m. at the Seniors’ Centre at 26 Bythia Street, Orangeville. For further information, feel free to contact Maestro John Wervers, 519-925-6149; Stan Elliotson, 519-941-6569; or Dave Lewars, 519-938-2055. Or simply show up at rehearsal.

Chairs are open in all woodwind, brass and percussion sections.

The description of our September 29th Belfountain Salamander Festival in your fall issue seems to have helped our cause. Not only did the village overflow with locals and visitors alike, but those who attended lauded our efforts to promote green living.

Amazingly, and to the organizing committee’s immense delight, at the end of what was a glorious day, we had a mere half bag of garbage and some very full green and blue bins. As one organizer said, “How do you measure success? I know! Invite 400 people or so to brunch and end up with half a bag of garbage.”

About 50 per cent of the coffee drinkers brought their own reusable cups and, when asked, many visitors indicated that their favourite item of the day was the Belfountain Inn’s butternut squash soup served in pumpkin-bowls and consumed with real metal spoons.

Visitors from Toronto, Brampton and Mississauga advised us to keep the festival small and focus on offering local food that can be eaten with no plastic cutlery or plates. It seems these experiences are part of what city folk expect from a country visit. So next year we will be only too happy to oblige.

The threatened Jefferson salamander (not the blue-spotted salamander, as the article said), which lends its name to our annual festival, and all members of the organizing team, thank you.

My husband, John Kearns, and I are former owners of Orangeville Travel and now live in Rockwood, although I still commute to Orangeville daily to work. I read In The Hills whenever I happen on a copy. I’ve just had a pleasant afternoon break and enjoyed your latest edition. There were two articles in particular that really appealed. John’s mother grew up in East Garafraxa and his father’s family were the original owners of a farm at The Maples. We use Jones Base Line often when we travel around our new home area. Also John loves brass bands, has two brass instruments of his own and played in the Orangeville Band when he was a teenager.

Congratulations on your success in creating a truly marvellous publication. Even the advertising is attractive and readable.