CLEAN, RENEWABLE AND FREE. Call it what you like, with the support of large grants and rebates for installation, Headwaters residents are pulling heat from the ground.

The folks at Bryan’s Fuel in Orangeville are having a busy year. In 2007, they installed twenty-three or twenty-four geothermal systems. This year they expect to do eighty. They’ve hired more crews and still, they’re booked solid with a two month waiting list.

Over at Don’s Heating and Cooling, they’ve installed more than twice as many as last year.

So what’s the big deal?

Well, in Southern Ontario, a metre or two below the surface, the ground maintains a constant temperature of about 10 degrees Celsius. This varies across the country, depending on average air temperature in the region. In simple terms, a geothermal, or earth energy system gathers this heat, moves it into your house, and concentrates it until it’s warm enough to heat your home.

The heat is usually gathered by one of two means. In an open loop system, well water is pumped directly into the house, returning to the aquifer through a second well. In closed loop systems, fluid-filled pipes are buried below the surface, laid out in either a vertical or horizontal loop. The fluid then circulates through the loop, being warmed by the earth.

Back at the house, it passes through a heat pump, which gathers and concentrates the heat. This sounds complicated, but actually you’ve already got a heat pump in your house – your refrigerator. Inside your fridge, as warm items are cooled, the heat from them is released into your kitchen by the coils on the back of the appliance.

Along with heat, geothermal systems also supply hot water, and, by reversing the process, air conditioning in summer.

The process is terrifically efficient, supplying between three and four units of energy for every unit of electricity it takes to run. Or, as Roy Bryan at Bryan’s Fuel says, “You only have to operate an electric pump, so it’s like paying for one unit and getting three free.” The Canadian government estimates that installing such a system can reduce home heating bills by up to 70 per cent.

Sounds great, right? Well, you knew there had to be a catch. They don’t come cheap. Though prices vary widely, depending on the specifics of any given project, “I’d say an average cost is about $25,000,” Roy Bryan says. 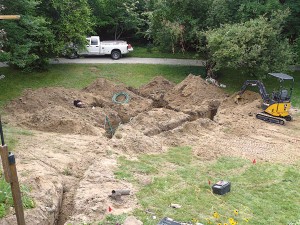 Workers install a “vertical loop” geothermal system at the home of Bob and Lynda Noppe in Caledon.

Bob and Lynda Noppe recently took the leap. They built their Caledon home twenty-six years ago and, because they were conservation-minded even then, the house still tested well when they carried out the energy audit which is required to qualify for government rebates. It also features passive solar design. As a result, even with an aging electric furnace heating three levels of space, their total annual energy bill (hydro, hot water and heat), before geothermal, was only $2,700.

Part of the energy audit involves setting up a big fan that pulls air from the house. “The best part of the audit,” says Bob Noppe, “was that they turned the fan on full-blast and we got to go around and check to see where air was coming in.” Even though the Noppe’s house is well insulated, there were still unexpected leaks around a few windows. A small length of wall in the basement, where floor joist headers had been left un-insulated, quickly turned up.

The Noppes chose a “vertical loop” geothermal system, to cut down on the amount of land required. Despite the large size of their property, Bob says, “We would have had to cut down too many trees. Most of the open area around the house is already taken up by the septic system.”

Instead, “they drilled twelve holes, each seventy-three feet deep,” says Lynda Noppe. Plastic supply and return tubing is inserted in the holes. “Then they dug trenches about five feet deep to connect the holes to each other and the house.”

All told, the Noppes’ system, which was installed by Headwaters Geothermal, a company bases in Mono, cost about $28,000. “I just about fell over when they first told me that,” says Lynda. However, with grants and rebates totalling $12,000 from ecoENERGY and Caledon’s Powersource programs, the Noppes’ net cost was reduced to $16,000. Anticipating a savings of $2,000 per year, the system will pay for itself in eight years.

Having now been through the installation, Lynda can see where the costs lie. “I was gob-smacked at how much work it was.”

Considering the length of the pay-off, even after rebates, the choice might seem odd for a couple in the second half of their sixties. “On the contrary,” says Bob, who is also a real estate agent. “I think older people are looking at increasing the value of their homes, knowing that one day they will sell. I expect this option would be attractive to a lot of them.”

As with any emerging technology, there are those who see a buck to be made installing geothermal systems. “Lots of people are getting into doing it,” says Roy Bryan. And buyer beware: “The quality of the installation is critical.”

There are also those who try to cheat. Bryan has seen several cases where people have only installed one well, and instead of travelling through a loop, after the water has passed through the heat pump it is simply being pumped out onto the surface and allowed to run off. It’s a huge amount of water – “about ten gallons a minute, twenty-four hours a day,” Bryan says. “If you get two or three people doing that in an estate subdivision, you’ll pump the aquifer dry.”

While there are exceptions to every rule, current rebate and grant programs make properly installed earth energy systems a feasible alternative for a much wider range of Headwaters residents. The supply is free, endlessly renewable, and clean.

Vertical loop systems are used in situations where limited open ground is available. Horizontal loop systems are often installed where sufficient open area is available, or where conditions below ground are not optimal. Where feasible, a pond loop system allows geothermal installation without extensive excavation, minimizing property impact and installation costs. Open loop systems, which pump water directly from the aquifer through a well and, after passing through the house, return it to the aquifer through a second well, are suitable where abundant water supplies are available. 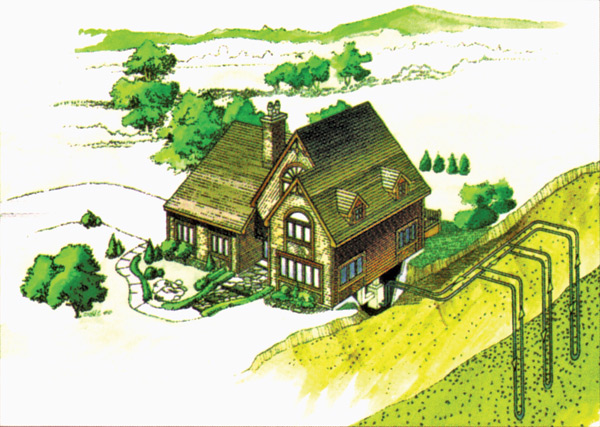 Vertical loop systems are used in situations where limited open ground is available. 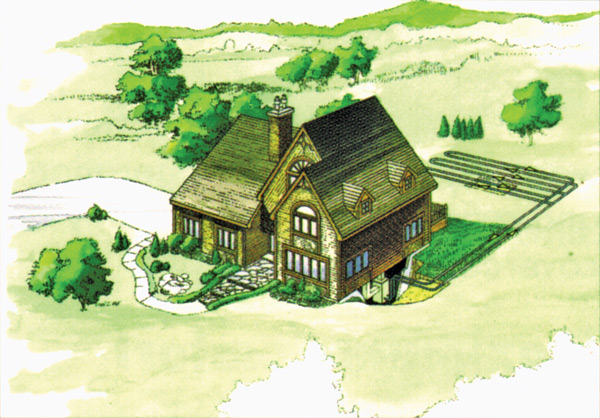 Horizontal loop systems are often installed where sufficient open area is available, or where conditions below ground are not optimal. 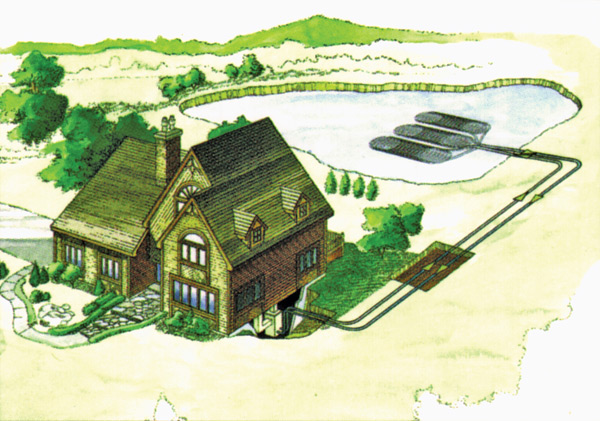 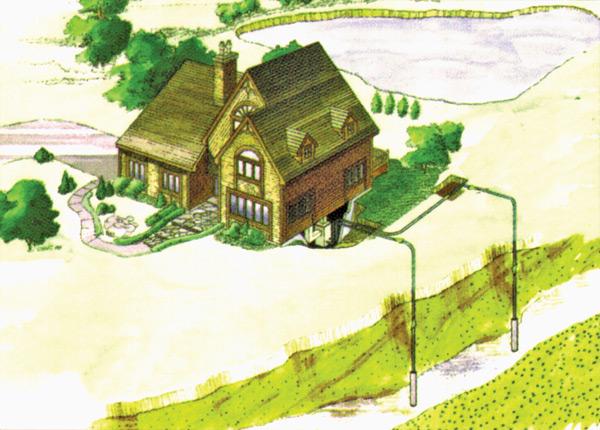 Illustrations reproduced from the brochure of NextEnergy Geothermal Solutions Inc. 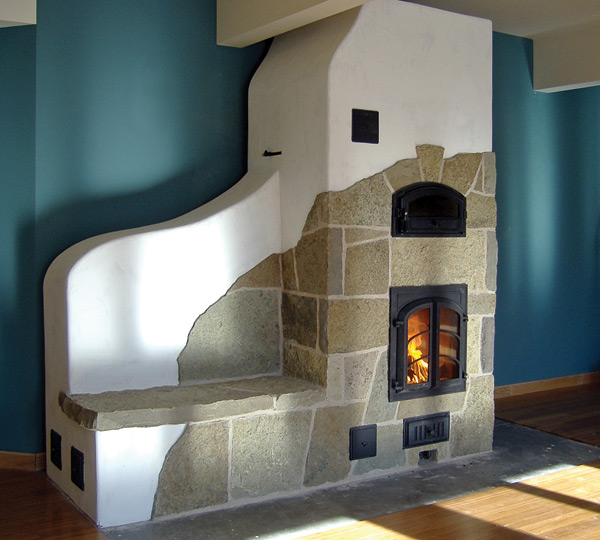 Soul of the Home

In Finland, masonry heaters are known as “heart of the home,” and in Russia it’s “soul of the home,” reflecting the importance they have in people’s lives.