Doc Gillies: One of our 2009 Local Heroes

His nickname tells his story. Legendary community champion Doc Gillies’ real name is John. Although even his wife Nancy calls him Doc, he’s not a doctor. He’s the Fixer.

Doc’s mister-fix-it skills first came to light in the 1950s. He was working as a sales manager for an ailing Ford dealership in his hometown of Galt. Doc successfully turned the business around. The company took notice, and put him on the road doing the same for other dealerships, bringing him to Orangeville in 1959. Nancy liked the town. They stayed, and Doc became the new owner of Broadway Ford. 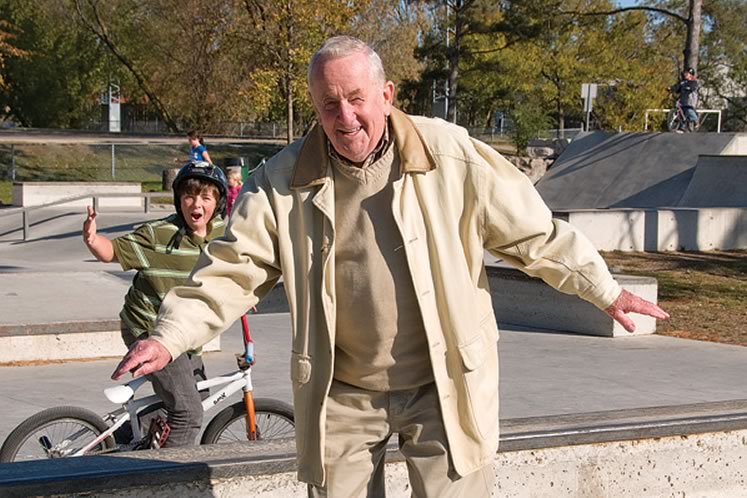 In the mid-1970s Doc sold the dealership to his employees and began planning an early retirement: “I was forty-two and I thought ‘That’s it. I’m done.’” He had a forty-two-foot sailboat built, took his five kids out of school, and for the next two years the family toured the Mediterranean, and then crossed the Atlantic.

“Fewer than a hundred boats a year were making trans-Atlantic crossings at the time,” Doc recalls. Why such an extreme family adventure? “It was so I could get to know my kids. I was always working. It occurred to me that I had been an absent father.”

On his return to Orangeville in 1983, Doc served as the town’s economic development officer until 1988 – for which he was paid one dollar a year. “They gave me an office, but I don’t think I ever actually got the dollar.” After that, he began partnering with others on residential development projects that now include more than 450 homes in Orangeville. He also built and still owns three Orangeville malls.

Although Doc’s contributions to the development of Orangeville’s physical landscape are significant, they pale beside his record of community service.

A long-time supporter of youth, he was a major player in the construction of Rotary Park and later its skateboard park, and he worked behind the scenes to help establish The Door youth centre. A strong advocate of the value of education, he helped with the fundraising efforts for the reconstruction of the Orangeville Public Library and the acquisition of the Humber College site.

In health care, he has served as chair of the Headwaters Health Care Foundation, and is one of the hospital’s senators. He was an unpaid general contractor for the Highlands Medical Clinic, and remains instrumental in ongoing medical clinic planning.

As if all that weren’t enough, he also donated land to the Town of Orangeville for a planned tourism centre, and is a forty-nine year member of the Orangeville Rotary Club.

In 2008, he was named a provincial Senior of the Year.

Along with David and Huda Scott, Doc and Nancy are currently honorary fundraising chairs for Building Dreams Together, a partnership between Community Living Dufferin and Theatre Orangeville to construct a new work and rehearsal facility. Doc also serves with Friends of Island Lake, Headwaters Communities in Action, and Family Transition Place.

These days, Doc focuses on fixing the future. “I’m endeavouring to build leaders,” he says. “We need people to take hold and sometimes it’s better to come along with an older horse.”