Letters published in the Winter 2010 edition of In The Hills magazine.

What do Cougars Eat?

I come from an area of southwestern Alberta with a healthy population of both cougars and elk and I have to say that the opening two paragraphs Don Scallen’s story (Has the Cat Come Back? fall ’10) reflect poorly on the author.

The implication is that a cougar’s prime prey is/was elk. This is simply not true. Perhaps it was literary licence to make the cougar seem bigger, badder and generally more dangerous?

For the most part, deer are the only member of the ungulate family that cougars regularly stalk. Even the ranchers surrounding us rarely have cattle or horses taken down by a cougar, though they may well scavenge carcasses.

Most cattle and horse losses can be attributed to coyotes, wolves or bears. Ms. Hubert’s mares were most likely not attacked by cougars, as they tend not to leave punctures on the hind quarters.

As a person who was very active in hiking and hunting, I have spent an awful lot of time on friends’ ranches. I only witnessed two actual sightings, though tracks were more common.

One of my best friends is a game warden and conducts investigations with regard to the livestock compensation program in Alberta.

He directed me to this excellent publication on identifying the source predator:
http://www.srd.alberta.ca/ManagingPrograms/FishWildlifeOfficers/documents/RanchersGuideToPredatorAttacks-May2010.pdf

Cougars do, in fact, regularly prey on elk.

One of the publications I read as part of my research was Cougar Ecology and Conservation, edited by Maurice Hornocker and Sharon Negri (The University of Chicago Press, 2010).

This book is a compilation of articles about the habits and behaviour of cougars. A featured article is “Diet and Prey Selection of a Perfect Predator,” by Kerry Murphy and Toni K. Ruth. It includes a chart entitled “Percent occurrence of prey animals in cougar diets in western Canada and the northern United States.”

According to this chart, elk were consumed more frequently than any other prey species in studies in British Columbia, Washington, Idaho and Montana. Looking at all of the seventeen studies reported in this document, mule deer are the number-one prey animals, but elk are a close second.

The suggestion that I took “literary licence to make the cougar seem bigger, badder and generally more dangerous” also merits a response. That was not my intent at all. I chose to open the article by imagining a wary elk sniffing the air for indications of predators, to encourage readers to think about how profoundly different their hills were in the not so distant past.

I wanted, as well, to establish the theme of loss and recovery – the loss of so many of our animals since the advent of European settlement, and the new and hopeful reality of some of them returning. The elk never will return, but the cougar?

Finally I thank the correspondent for his interest, and envy his outdoor pursuits in such a lovely part of Canada.

Thanks for Giving this Thanksgiving!

I arrived at my door last week to find two brand-new cast-iron frying pans. No note. Just another example of the Caledon community coming together to help.

The Palgrave Community Kitchen was featured in “Homegrown in the Hills” in the summer issue: “Anyone have old cast-iron frying pans they’d like to donate?”

Thank you! The frying pans arrived just in time to use them to make stuffing for 450 lbs of turkey.

On Thursday, October 7 another example of community commitment continued in Caledon.

Thank you to the 55 volunteers who made this community Thanksgiving dinner happen. They put in a total of 500 hours to shell peas, blanch corn, peel potatoes and rutabaga, grate cabbages, make stuffing, cook turkeys, bake pies and wash dishes!

Thank you to the seven local farmers who grew the food for our amazing menu: Van Dyken Brothers, Steve Smith, Betty and Ron French, Gerald and Trish Reid, Albion Orchards, Spirit Tree Estate Cidery and Broadway Farms Market – all within ten miles of our event.

Thank you to the 500 folks who came to eat, chat with their neighbours, share a meal (maybe even take one home) and celebrate the harvest.

A striking common factor among the former councillors you interviewed (Home after Supper fall ’10) is that frustration arises as the restrictions imposed by the Ontario government on local government are realized.

It does not make sense to centralize rural planning in a Toronto high-rise when the workers there have never walked a pasture or woodlot. 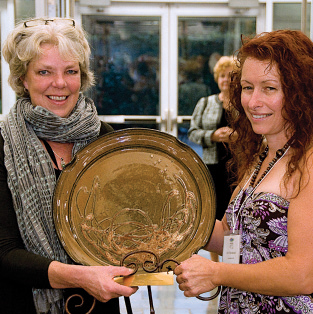 At the opening gala of the Headwaters Arts Festival in September, Headwaters Arts presented In The Hills publisher/editor Signe Ball (left) with the Award of Excellence for outstanding contribution to promoting local arts. The award included the presentation of a plate created by Orangeville-area potter Ann Randeraad (right). On the same evening, artist Richard Nevitt was honoured with the Lifetime Achievement Award.

This was wonderful news about the award from Headwaters Arts. In the Hills is consistently thoughtful, relevant, beautiful, informative and ahead of its time. Fantastic leadership and vision and a commitment to our global community.

Many thanks to Ann Randeraad for her lovely plate, to Clare Booker for her lovely words, and to the many other friends and arts supporters who offered their congratulations. And, of course, deep gratitude to the board and members Headwaters Arts, not only for the recognition, but most important, for the exhilarating creative spirit they continue to bring to the hills.