Ted Webb’s infectious passion for cycling has transformed a sleepy village into a road racer’s dream.

“I peaked at 65,” Ted Webb tells me. At an age when most Canadians are retiring, Webb broke an hour in a 40-kilometre bicycle time trial. It was a beautiful day, he recalls, and the course was flat. Completing the distance in 58:53, he explains, is akin to a runner smashing the four-minute mark. It separates the good from the very good.

Now 78, Webb will never top his personal best, but he has come pretty close. “In my wildest dreams I never thought I’d match my second best time when I was 70.” The time he matched was the one he’d set in 1956, when he was just 17.

But fulfilling dreams is what Webb is all about, so it’s no surprise that he has also realized his vision of hosting an elite bicycle race in Terra Cotta – the village he migrated to ten years ago because it seemed like a little bit of his native England, the country where learned to love bicycling. “After the war,” he explains, “I found I was faster than most people I rode with, so I kept going.”

While it was Webb’s dream that initiated the road race, it took all of his friends, supporters, fellow cyclists and then some to organize Le Tour de Terra Cotta. Now in its seventh year, the race is an old-time community effort. Held each year on the Civic Holiday Monday in August, it brings out dozens of volunteers, many of them village residents, as well as a boisterous crowd that cheers on the over 400 competitors. 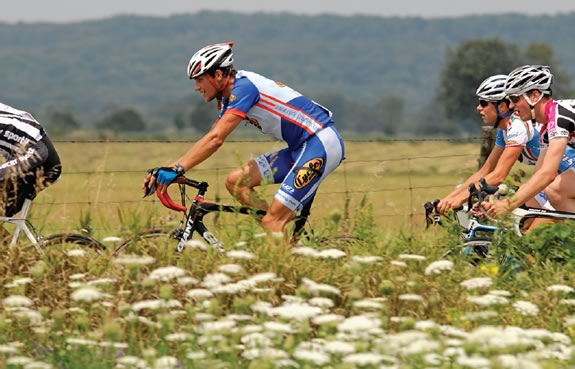 It’s a gruelling route, 12 times around an 8.6-kilometre loop, that involves a steep climb (10 to 15 per cent grade) up Heritage Road – or, more correctly – 12 steep climbs up Heritage Road. “This is a hard race. It’s a selecting race,” Pierre Perrin, a regular participant, explains. “You have  to train for this race.”

I’m sitting at Webb’s dining-room table with him and Perrin, who has competed in all seven Tours, and Perrin’s partner Anita Lagler, who was on the podium in Terra Cotta a couple of years ago. Webb’s wife Joan Wong, race director Ian Jay and race media coordinator Donna Cragg are also there. Dave Rutherford, another key organizer, is absent on this day.

We are enjoying glasses of wine and snacks as I’m regaled with stories about their favoured topic. The small crowd that has turned out to tell me about Le Tour de Terra Cotta is proof that this is indeed a community affair. All the race proceeds are donated to the village’s effort to re-build its community hall. Last year, that added up to $6500.

Since Jay took over as race director, the Tour has added events that appeal to those who don’t sport Lance Armstrong-like thighs and Secretariat-like lungs. “I wanted a race that my kids could grow up with,” explains Jay, whose house is on the course route. He has added three-lap and six-lap races open to all ages, as well as a kids’ single-loop time trial.

Both of Jay’s kids, aged 10 and 12, compete. His daughter Madison completed her first one-loop distance when she was eight. The shorter races are intended to appeal to triathletes looking for some extra training, or anyone interested in the excitement of a bit of competition.

The Tour is the fifth-largest cycling road race in Ontario and the only one to have full road closure. To the uninitiated, having the road dedicated to cyclists may not seem like a big deal. But if you watch the race, or participate in it this year on August 1, you’ll realize what a difference it makes.

The Tour starts at the Terra Cotta Inn where dozens of sleek, jersey-clad racers fill King Street. The fastest have lined up at the front of the pack eager to get a jump on their rivals. If you happened unaware upon the spectacle, you’d be forgiven for thinking that Le Tour de France had arrived in Caledon.

After the starting gun sounds and the cyclists push off, many of them rise on their pedals in order to power up to maximum pace in the shortest time possible. Minutes later, when they cross the Credit River bridge, they’ll have hit speeds in excess of 40 kilometres per hour. But just as they’ve gained that momentum, the riders hit the first 90-degree turn. Pulling wide to the left side of King Street, they sweep around the turn, their bicycles pitched at angles that seem to put their knees precariously close to the pavement. 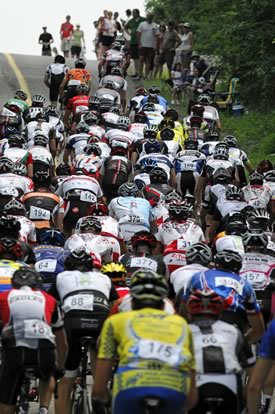 Travelling in a pack, or peloton, they move with the organized precision of Canada’s Snowbird Squadron, each bicycle a mere 18 inches or less apart. This race is all about speed – speed over a long distance and up a very steep hill.

A long straight stretch greets riders at the hilltop and, with the wind normally at their backs, they fly until the next corner (turning west on to Old School Road) tests their courage – riding that fast that close together is not for the faint of heart. Eating up the miles, they soon turn north on to Winston Churchill Boulevard and down the long hill where they will attain speeds of 70 kilometers per hour or more.

Within about 15 minutes, the fastest racers are back on King Street where the crowds cheer them on. Perrin explains, “The fun part is when I go through the village and realize that there are more people there than just my girlfriend and my mum.” Jay adds, “To have someone call your name is such a boost.”

A recreational cyclist who sticks to the flat rail trail, Donna Cragg is another one of the volunteers who keep Terra Cotta hopping and make the Tour possible. A village resident since 2004, she says, “I’m the one who is always asking: “Have you done this, have you done that?’” Villagers control traffic, look after parking, handle registration, staff water stations and put up hay bales. Several stalwart women run the concession stand, set up in tents behind the Terra Cotta Inn.

Innkeeper Roberto Florinda has been another staunch race supporter since day one: “I think it’s great. It’s neighbourly. It’s big. It’s nice for the community.” It also reminds him of the colourful bicycle races of his childhood in Italy. 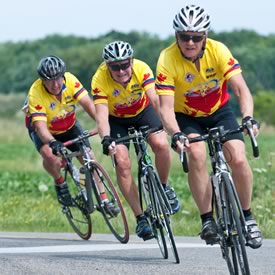 Ted Webb remains a race favourite. These days, he rides the course with four or five team members, who are all clad in matching Brampton Cycling Club yellow jerseys. In the time-honoured tradition of races like Le Tour de France, they ride single file, with Webb pulling up the rear where there is the least wind resistance. Every few minutes, the lead rider pulls out and slides back into the spot just ahead of Webb and a fresh rider battles the wind. In this way, Webb “drafts” behind his mates, maintain-ing a pace that is a full 10 kilometres an hour faster than he can do on his own.

As they speed through the village, the cheering rises a notch or two as the crowd chants: “Team Ted. Team Ted. Team Ted!” And so far, the Tour’s inspiration hasn’t let his fans down. He has made it on to the podium in his age class every year so far (though he modestly notes the class is a small one).

Webb has a quiet influence in Terra Cotta. Cyclists riding past his home on King Street often call out to him as they glide by. Though his junior by 25 years, Perrin says Webb is his rival, referring to him as “the stud” of the Brampton Cycling Club. Anita Lagler credits Webb with helping her attain her podium finish. Cragg says she became involved in the race because, “I wanted to see Ted’s vision realized.” And Roberto Florinda has also been touched by the village’s beloved cyclist. “I am behind him 100 per cent,” he explained when I asked him why he is willing to host the Tour’s beer tent and provide much of the event’s parking.

Webb, whose trim physique, rosy complexion and clear blue eyes belie his age, is genuinely surprised to hear about the affect he has on others. He is a natural leader whose passion for what he does brings out the best in people. Meet the man and you will want to help him out too. He leads by example, cycling over 10,000 kilometres a year on routes throughout Headwaters and beyond.

A loyal member of the Brampton Cycling Club, Webb is also active with the Town of Caledon’s Share the Road signage program, which encourages drivers to give cyclists space. He helps less-seasoned riders and even offers to accompany me on my first “century ride,” which involves cycling 100 miles in one day.

“Cycling is freedom for me. It has so much to offer. It’s about camaraderie and fitness,” Webb tells me, his eyes shining as his mind drifts to the sport he loves.

More related to this article:

BIKE EXCHANGE, Notes from the road and trail
by Nicola Ross