What happens when five of Caledon’s most committed local-food mavens get together to share coffee, muffins and some big ideas?

On a clear morning last October, with fall’s first frost still two weeks away, I met with a handful of Caledon’s most diligent foodies at Palgrave’s Community Kitchen in the town’s United Church for our first official Kitchen Table Talk. Over mugs of steaming organic, fair-trade coffee and homemade pumpkin-cranberry muffins, we set about discussing a subject dear to our collective hearts: how to continue to advance Caledon’s burgeoning local food movement.

Last fall, Kitchen Table Talks like ours were taking place in communities across Canada. They were the brainchild of the People’s Food Policy Project (PFPP), a grassroots, pan-Canadian network of citizens and organizations that is proposing Canada’s first food sovereignty policy. The network, founded in 2008, includes eaters, farmers, community and health workers, academics, cooks, small business owners and others who believe that ordinary citizens should have a say in their food system. The purpose of the talks is to gather grassroots input to help fix Canada’s “broken” food system. This spring, PFPP will present the “cures” that emerged from the Kitchen Table Talks and other forums to the federal government in the hope that our voices will be heard and acknowledged. 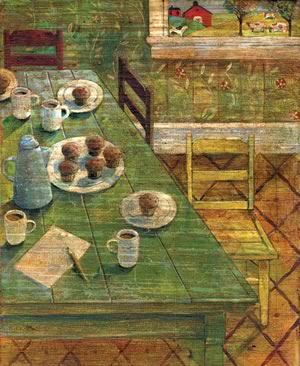 There were five of us at the table: Barb Imrie, who is responsible for starting Palgrave’s Community Kitchen, a certified kitchen that can be rented by local producers and caterers who need an inspected facility in which to prepare their goods and meals; Karen Hutchinson from the Caledon Countryside Alliance; Jennifer Clark, who manages the farmers’ market in Inglewood and heads up Eat Local Caledon; Amy Darrell, who occasionally works with Everdale, an educational organic farm in Hillsburgh that operates a Community Shared Agriculture program; and me, president of the Belfountain Community Association.

We were there to discuss ways to make local food a bigger deal in Caledon. Proud of how far we have come since the Caledon Countryside Alliance began promoting local food more than a decade ago, we were hungry for more progress. What can we do to put local food and agricultural produce squarely on the dinner plates of more Caledonians? Can our backyard become a proving ground for the systemic changes promoted by PFPP, an organization that believes food is inextricably linked to our economic, social, environmental and, most important, physical health, and that food is not simply a commodity that is traded to maximize private profits? Can we help to promote “food sovereignty,” a concept that is embraced by PFPP and was originated internationally by the Indonesia-based organization La Vía Campesina?

PFPP would like to see more government support for small-scale, organic and environmentally sustainable farms. However, according to Neil Currie, general manager of the Ontario Federation of Agriculture, which represents some 37,000 farmers (most of whom are tied into the conventional industrialized food production system), some PFPP recommendations are controversial. They include the network’s recommendation to take food out of trade agreements and establish a moratorium on genetically modified products until the government has implemented provisions put forward by the Royal Society of Canada’s Expert Panel on the Future of Food Biotechnology. (For all PFPP’s recommendations, see peoplesfoodpolicy.ca).

Back at our kitchen table, though, ideas of a more local nature bubbled up like yeast in warm water.

We recognized that Eat Local Caledon is already doing a lot to promote local food. In addition to its involvement in both the Inglewood and Caledon (Bolton) farmers’ markets, it compiles a directory of local agricultural producers (available at eatlocalcaledon.org), and organizes an eat-local month held each September featuring a seven-day eat-local challenge. Its Chefs’ 50K Commitment program involves several Caledon restaurants that include local options on their menus. This year, the organization has linked up with the Palgrave Community Kitchen to offer cooking classes hosted by local chefs who will use local products.

To raise awareness about local, healthy food among youth, Eat Local Caledon also organizes the playful Caledon Crunch. It asks 4,000 students at eight elementary schools to crunch on a local apple – all at same time. The event is broadcast on B105.5FM.

All those things gave us lots to chew on besides our muffins. But there is still much more to be done. Located in Toronto’s densely populated urban shadow, Caledon is well placed to help realize many other PFPP goals.

Second, Caledon needs to develop, implement and fund local-food purchasing policies in public institutions including hospitals, schools and government buildings. Imagine the health, economic and environmental benefits that would result if public pools, arenas and schools served fruits, vegetables and beef patties produced by local farmers rather than salt- and fat-laden, pre-packaged burgers imported from who knows where.

These were the ambitious goals generated by our the first (and we hope not last) Caledon Kitchen Table Talk. We recognized that some PFPP policies are a long way from being realized. Still, it is gratifying to know that our small group is helping to kick start a national food movement that, with or without government buy-in, is destined to evolve – even it it’s just one local apple at a time.