n. a large-leaved plant of the dock family which produces thick reddish or green leaf stalks; the cooked leaf stalks of this plant, eaten as a dessert
Oxford English Dictionary 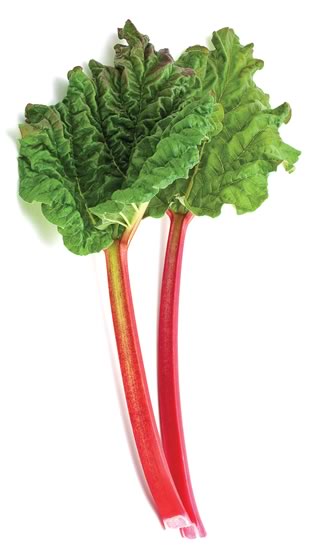 venerable
Rhubarb was first referred to in China in 2700 B.C. It was grown for centuries in Russia along the River Volga and was more valuable in Medieval Europe than cinnamon, opium or saffron.

medicinal
Its dried and powdered root has been used in medicine for at least 5,000 years and is highly effective as a laxative and can be used as a dieting aid.

beneficial
In 1921, a British colonial doctor, Dr. Burkitt, reported in The Lancet that he knew of “no other remedy in medicine which has such a magical effect” as powdered rhubarb in the treatment of acute dysentery.

edible
It wasn’t used as a food until sugar became affordable to common people in 17th century England.

versatile
The Iranians use it in stews; the Italians use it to make a low-alcohol apéritif; the Polish as a tart accompaniment to potatoes.

practical
Settlers brought rhubarb to North America in the 1820s.

toxic
The leaves are toxic, containing high concentrations of oxalic acid salts and should never be eaten by man nor beast.

fruitful
Rhubarb is one of the first foods ready for harvest, usually early May in Ontario.

colourful
Green-stalked rhubarb is more robust and has a higher yield, but red stalks are more popular with consumers.

animal vegetable mineral
Although it is used as a fruit, rhubarb is actually a vegetable.

local
Lennox Farm near Shelburne produces about 240,000 pounds of rhubarb a year, making it one of the largest producers in Ontario.