Can she make an apple pie?

Pie judging is a complex, dirty job, but someone has to do it!

Not really, but the author gives it a good try anyway and enters her dubious effort in the local baking contest.

Sara Hershoff licked her plastic fork, sighed and plunged it into another apple pie. Before her on the gingham-covered table, 16 golden tarts shimmered in the October sunshine. It was a dirty job, but someone had to do it. Sara, publisher of the town’s newspaper, was one of four judges at the fourth annual Creemore Heritage Apple Society’s apple-pie contest, held last Thanksgiving weekend at the local farmers’ market. 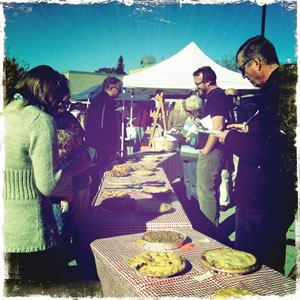 “Pie judging is really complex,” Sara said as she and fellow judge, Bill Mann, a retired executive, sampled a forkful of pie No. 2. (This is a small, highly competitive community, so blind judging was a must.)

“Mmm. Very subtle,” said Bill smacking his lips and closing his eyes. The crowd of onlookers gathered around the pie table included many of the pie-makers themselves. And as the judges nibbled and made notes, you could cut the tension with a fork.

I was there covering the event for this magazine, but unbeknownst to the organizers, judges and other competitors, I had an ulterior motive: Pie No. 8 was made by none other than me. What better way to capture the edge and suspense of a rural apple-pie contest than by experiencing it first-hand?

“What,” I asked Pat Prime, an area realtor, “are your qualifications to be a judge?”

“I’ve always had an interest in pies,” said Pat. “I come from a background of great baking. I’m not a pie-baker, I’m a pie-eater.”

But would she like mine? I wasn’t hopeful. At home, it had seemed like a credible effort, even appetizing, but here lined up beside pies that would have given Martha Stewart pause, it looked amateurish and, well, pathetic.

The judges didn’t seem to notice however, dazzled as they were with pie No. 4, a masterpiece adorned with tiny perfect pastry leaves. I decided to interview my fellow competitors while I waited. Perhaps I might learn something.

Catherine Morrissey, who lives just outside the village, said she has entered the apple-pie contest every year since the event started. She has never won first prize. Her friend, Brian Koturbash, a weekender, took home the red ribbon two years ago and the intensity of their rivalry has blossomed ever since.

“Brian Koturbash and I are rivals,” Catherine told me. “I taught him how to bake pies. Now, whenever I go to his house, he puts on his red ribbon.”

“My secret ingredient is vodka,” Brian said, explaining his theory that the alcohol keeps the pastry ingredients cooler longer. “Catherine is my mentor,” he added with the graciousness of a natural winner, “but she gave away all her best tips.” Brian boasted that his pie contained a combination of Ida Red, Cortland and Royal Gala apples. Still, he was not optimistic about his chances in this event. “I used Smirnoff; it was all I had,” he said. “I made my winning pie with Grey Goose.”

“I think the vodka made the judges a little high,” snarled Catherine.

Back at the pie table, judge Bill Mann was taking a tentative bite out of pie No. 8.

“What did you think of that one?” I asked.

“Hmmm,” he frowned and licked a pastry flake from his lips. “Disappointing,” he finally said.

Sara Hershoff, perhaps sensing it was my pie, tasted it and, a note of apology in her voice, offered this crumb of consolation: “But I kind of like these burned bits at the edges.”

It wasn’t my fault.

Flashback 24 hours. I blame my new gas oven. That and the fact the only thing I know about pastry is it takes practice, which I haven’t had. My sister Nicola is the pastry-maker in the family. Lately she’d been raving about using a food processor. “Foolproof,” she said.

I decided to use butter and lard instead of shortening because they’re supposed to be easier to work with. Then all-purpose flour, a pinch of salt and some ice water. I pulsed the machine until the ingredients came together in a ball (sort of). The first batch, a crumbly mess that defied rolling, ended up in the garbage. The second batch (practice, practice) was marginally better. After patching the tattered-looking disk around the edges, I managed to get it from board to pie pan more or less intact.

I tossed the apple slices (Northern Spy) with a little sugar, layered them in the pastry-lined pan, rolled out a second round of pastry (getting better all the time) to cover the apples, and finally I cut an apple-shaped hole in the top.

Now for my secret ingredient: While I was wrestling with the dough, I let the apple parings and a cinnamon stick simmer in a small saucepan on the back of the stove. I poured the resulting liquid, an apple-cheeked pink loaded with pectin, through the hole in the top of my pie, the theory being it would turn the filling a lovely rose-coloured hue and improve the flavour and texture of the apples.

Then I brushed the top with a little milk and baked it for an hour in my new gas oven, whose temperature idiosyncrasies I am still, a year after buying it, only just beginning to understand. The result was definitely a pie, an ugly one, but a pie nonetheless.

Needless to say, it didn’t win, didn’t even place in the top five. And I never did get to taste it. I was too embarrassed to claim ownership of my rustic burnt offering. Still, I’m secretly hoping this year they’ll ask me to be a judge.

The winner was veteran pie-maker Wilma Zeggil from Singhampton, who told me she’s been making pies for 50 years. That’s where practice gets you. Here’s how she does it:

The 2011 Creemore Heritage Apple Society apple pie contest takes place on Saturday, October 8 at the Creemore Farmers’ Market. For information about how to enter, go to creemoreheritageapples.ca. 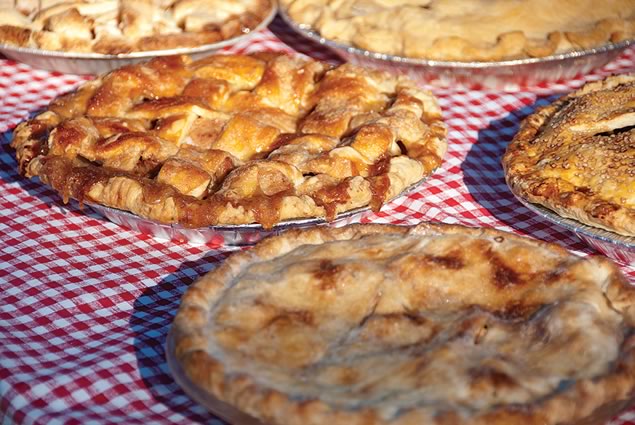