The Case for Local Meat Processing 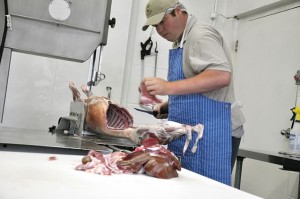 In ten years, the number of small- and medium-sized abattoirs in Ontario has plummeted from 500 to fewer than 150. Still, for Headwaters farmers and consumers, the news is not all bad.

In the comfortable office of Metheral Meats, located on a rural road near Dunedin, worn chairs sit slightly off-kilter and a well-used coffee pot perches among stacks of mismatched mugs. Rick Metheral’s son, 25-year-old Dane – the eighth generation of Metherals to work the family farm – serves customers at the small retail counter, where lamb is the primary product for sale.

But step next door to Metheral’s processing plant, and the contrast is startling. Gone is the impression of casual coziness that pervades the office. The plant, stock pens and hide room are immaculate. The floor is spotless, stainless-steel surfaces gleam and the cutting machines and other tools of the trade are squeaky clean and ready to go.

Metheral Meats, founded in 1991, is one of the provincially licensed abattoirs that survived an Ontario government push to beef up meat safety standards in the wake of the 2003 mad cow disease scare and the 2008 listeria crisis, in which more than 20 people died.

Sarah Petrevan, senior communications adviser to Carol Mitchell, Ontario’s minister of agriculture, food and rural affairs, said the ministry is trying to achieve two goals: make food safe and ensure that local processors survive so people who want to eat local meat can do so.

In Ontario, all meat intended for sale must be slaughtered in an abattoir that is licensed and inspected by either the federal or provincial government. Federally licensed abattoirs are generally large facilities that mass-produce meat, buying and processing animals in huge batches and often exporting their products to other provinces and countries.

Provincially licensed abattoirs such as Metheral Meats can sell their products only within Ontario. This usually means they are smaller, slaughtering and processing fewer animals at a time. They serve small-scale livestock producers who can’t meet – or aren’t interested in meeting – the high-volume demands of most federally licensed abattoirs. Their products are often sold to consumers, restaurants and retail outlets interested in buying locally produced meat.

But for many provincial abattoirs, the increased emphasis on meat safety became something of a death knell. At the same time as the local food movement was increasing demand for locally produced meat, the Ontario agriculture ministry was clamping down on the way slaughterhouses operate. Many abattoir operators decided the cost of making the changes necessary to meet the standards was prohibitive. So they chose to close their doors.

And the numbers are sobering. Ten years ago, about 500 small- and medium-sized abattoirs dotted the Ontario countryside. Today, this number has plummeted to fewer than 150. 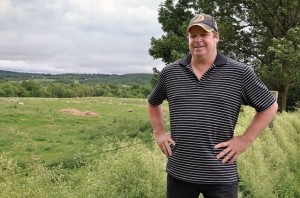 Rick Metheral of Metheral Meats: “We take pride in our shop.” Photo by Trina Berlo

Even Rick Metheral, whose family business has successfully weathered the storm of changing rules, concedes he has felt irritated by the red tape and rules that are sometimes interpreted differently by individual, and sometimes inexperienced, provincial inspectors.

“They are always wanting something,” he said. But he also acknowledged: “We’ve always kept up on everything. We’re a newer plant and we take pride in our shop.”

As a result, Metheral Meats is going strong, slaughtering, cutting and wrapping about 600 cattle and 3,000 lambs a year. In fact, business is brisk enough that the Metherals plan to shift their focus toward the abattoir end of their farm operation.

“Metheral Meats is by far the best of anyone I’ve ever used, and I’ve had a lot of experience slaughtering lambs,” said Bert Nieuwenhuis, who farms near Orangeville. “They do a bang-up job.”

The outlook is less rosy elsewhere in the province. In some areas, the sharp decline in the number of provincial abattoirs has reduced the options for many small-scale livestock producers. At the very least, they must transport their animals farther, incurring the extra costs that stem from driving longer distances.

The issue has caught the attention of various groups, including the National Farmers Union and the Federated Women’s Institutes of Ontario, which are actively working with the agriculture ministry to find ways to help small abattoirs meet safety standards without drowning them in red tape.

And Sustain Ontario, an alliance of groups that promotes local food, is approaching the issue from a different angle. Concerned that a shortage of abattoirs is impeding people’s ability to buy locally produced meat, the organization has dedicated a section of its website to encouraging consumers to speak out to help curb the loss of these small businesses.

In response to concerns, the Ontario agriculture ministry recently awarded $5.9 million in grants to help small- and medium-sized abattoirs upgrade to meet the changed rules.

But the outlook for these abattoirs is not all doom and gloom. Laurie Nicol, who has headed the Ontario Independent Meat Processors Association for 26 years, believes the closing of older provincial abattoirs that hadn’t kept up with new equipment and procedures may prove to be a boon to the sector. Those that remain open will have a larger client base and a better chance of surviving and thriving. 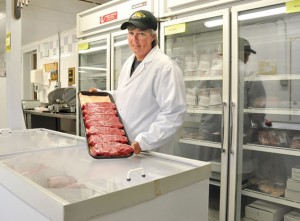 Stayner Meat Packers, a provincially licensed abattoir, is an example. The company also operates a retail outlet, Twelve Farms Butcher Shop, on the outskirts of the town.

When Stayner Meat Packers’ previous owners planned to retire three years ago, 12 operators, mostly farms, became alarmed. They didn’t want to lose their local abattoir, so they joined forces and bought the business. Since then, the new owners have invested about $25,000 to meet the ministry’s safety demands. Most of the renovations involved replacing wooden surfaces, which can harbour pathogens, with stainless steel or aluminum.

“It has been expensive,” said company president Linda Pease, “but people want to be safe, and we understand that.”

The business expects to break even this year, but Pease added it will take longer to recoup the cost of the upgrades. Still, the investment was worth it, she said, because it ensures local livestock producers have a processing plant nearby.

In line with the owners’ beliefs, Stayner Meat Packers processes only livestock raised without growth hormones or antibiotics. Most of the animals are grass fed with a grain supplement. These animals cost more to raise, so retail prices are higher than those found in the meat departments of big supermarket chains that can offer deals like strip-loin steaks for as little as $4.99 a pound.

But the company can compete for the loyalty of consumers who are concerned about where their meat comes from, what drugs and hormones it contains, whether an animal was force-fed on a feedlot and whether it was batch slaughtered in a huge facility where dozens of minimum-wage employees run a plant that operates 24 hours a day.

The stiffer provincial rules mean consumers can be certain that safety practices in small- and medium-sized abattoirs are as strict as those that govern larger facilities. Provincial inspectors are always on hand to oversee slaughters, and between slaughters, equipment is knocked down completely and cleaned thoroughly.

Still, a shortage of local abattoirs is just one of several trends that have persuaded some farmers to abandon producing livestock. Ministry statistics show the number of cattle on Ontario farms has dropped by 19 per cent since 2000, while the number of hogs is down by 15 per cent. Prices have also dropped, and fewer animals are being slaughtered. Only lamb is an exception to this trend, but lamb is not as popular with Canadians as beef and pork.

Small abattoirs are also feeling the effects of changes in consumers’ buying habits. Families used to purchase a side of beef and put it in their freezer. Now places like Metheral Meats and Twelve Farms tend to sell meat in smaller batches – a few steaks or a leg of lamb – often to weekenders passing by on their way to a country home, cottage or ski chalet.

Despite the difficulties, abattoirs and farmers in the Headwaters area seem to be bucking the trend that has been raising alarm bells in other areas of the province. Gord McArthur, for example, is a Caledon farmer who sells his beef at his farm-gate store, Heatherlea Farm Market. McArthur transports his cattle to an abattoir near Drayton, about an hour away, and though he complains about the expense of the long drive, he also said he continues to use the abattoir because he likes the quality of the work.

The transition to new ways of doing things may have been bumpy at times, but abattoirs in the Headwaters area have survived – and are upbeat about their prospects.

For consumers interested in supporting the local food movement, a strong local farming system can only be good news. 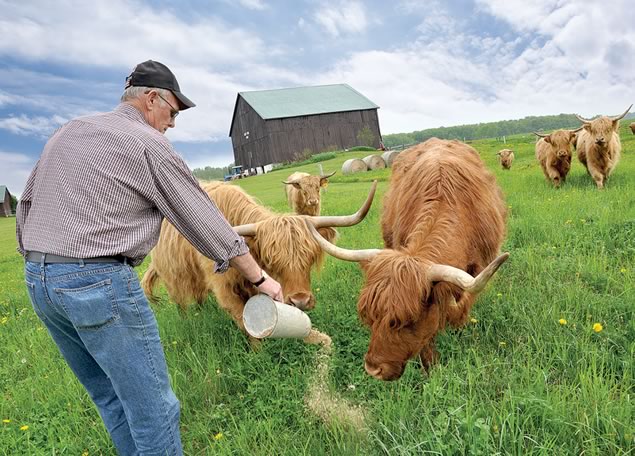