The versatile, friendly and compact Vanners are often compared to golden retrievers for their companion-animal qualities. 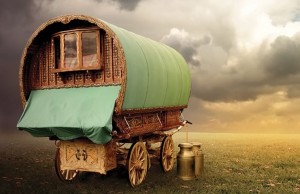 Horse enthusiast James Wilson caught his breath. It was amazing. In the field of a King City farm he saw a vision, an enchanting little black and white horse, long mane and feathers flying on the breeze. When Wilson inquired, he was told it was a “Gypsy Vanner.” Developed from Gypsy workhorse stock, it was a breed seldom seen in this part of the world. Smitten, Wilson soon embarked on a horse-buying treasure hunt. And now that first breathtaking sight has led to a new private club, complete with a “members only” boutique country inn and a multi-faceted partnership between Wilson’s own DeerFields Stables and Gypsy Gold, owned by Dennis Thompson in Ocala, Florida.

DeerFields, Wilson’s Palgrave-area property, was once a place where he went to relax and play with his horses. But after the Vanner bug hit, he soon realized that he wouldn’t have just one new horse, and that adding a “little” to his stable would mean adding a lot.

The farm would require a new stable, paddocks and arena. Even as Wilson was contemplating these upgrades, his urban friends were expressing a fond­ness for country life and bemoaning their lack of opportunity to partake. That sparked an idea. Why not share the passion? Why not a country club where people could come and enjoy the scenery in style, with the added dimension of working with horses?

On DeerFields’ nearly 100 acres of woods and rol­ling hills and on adjoining lands, there is access to 40 kilometres of hacking trails and the property is perfectly situated along Caledon’s portion of the Trans-Canada Trail. Now DeerFields would also need a clubhouse and a place to snuggle in for the night. In just over two and a half years, Wilson’s entrepren­eurial spirit and drive have created that and more.

While it all sounds terribly ambitious, the Duffy’s Lane hideaway is soothing and tranquil. At the end of the pine-lined driveway sits a top-notch horse facility, a casually sophisticated clubhouse, a French country-inspired inn, and a spa and restaurant sited to take advantage of the gorgeous views. The site includes a pond stocked with bass and koi, and a “pheasant run,” home to pheasants, chickens, pea­cocks and rabbits.

But that’s not all. Along the paddocks, there is also an oh-so-sweet garagiste-sized vineyard planted up with Foch, Vidal and Concord grapes. 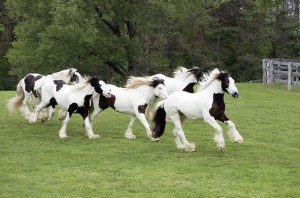 The Gypsy Vanners of DeerFields: The versatile, friendly and compact Vanners are often compared to golden retrievers for their companion-animal qualities. Photo by Ben Radvanyi

And then there are the horses.

Originally developed by Europe’s Roma and other “travelling” peoples to be reliable cart and family horses, Gypsy Vanners were historically a rougher grade mixed breed or utilitarian cobs, and the Gypsies’ stock-in-trade. That was until Wilson’s eventual partner Dennis Thompson, another vis­ionary horseperson, and his late wife Cindy, spotted a Vanner while on a U.K. business trip.

As Wilson would be later, the Thompsons were totally taken with the horse. They were invited to the owner’s caravan and, as they came to know him over time, were slowly educated into the warp and weft of Gypsy horse-breeding philosophy. After several years of research, the pair imported their first horses and, with almost missionary zeal, decided to found a breed. In 1996, they named and des­cribed breed standards, organ­ izing a registry that actively promotes the Gypsy Vanner and its enthusiasts. Now, in co-operation with Wilson’s DeerFields, both are growing in ways as unique as the breed itself.

The gregarious but calm Vanners and foals – many mature Vanners would properly be charac­terized as large ponies – populate DeerFields, along with Wilson’s first equines, a Tennessee Walker, mini, quarter horse and paint. But here is another surprise: The mares standing guard over the Vanner foals are mules.

Thompson discovered early on that there was a dearth of mares of de­pendable quality, and the ones he had could not meet demand. His veter­inarian mentioned the possibility of using mules as surrogates. So, as a natural problem solver, Thompson did his research and discovered some­thing he calls “hybrid vigour,” the tendency of the mule, a sterile hybrid of horse and donkey, to combine the best in conformation and personality of both, including a remarkable skill at mothering. Following on Thompson’s innovation and in partnership with the Florida program, DeerFields has taken up the experiment with embry­onic implantation. It’s a way to pro­duce foals and control lineage, as well as safeguard valuable Vanner mares. 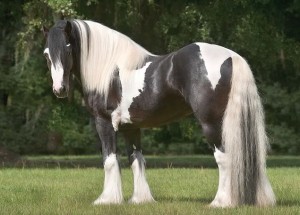 Currently the Gypsy Vanner regis­try lists about 1,200 approved stallions and mares. Hoping to add to that number, DeerFields recently acquired its first stallion, Thompson’s Gypsy Gold-bred “Banner.” In addition to being “studly,” Banner comes com­plete with a show business reputa­tion. He was a performing stallion in Arabian Nights, Orlando, Florida’s theatrical horse extravaganza, where he proudly pulled the princess’s carriage.

DeerFields is a fascinating and singular culture dish, both for equine and human affinities. Here is the stock horse of Europe’s once margin­alized peoples being brought along at an exclusive Caledon country club. This irony is not lost on Wilson. “You have to have tremendous respect for what the Gypsies have created,” he says, namely a safe, sturdy family horse. Indeed, the horses are friendly, not imposing in size, and have often been compared to golden retrievers for their companion-animal value.

Dennis Thompson also discovered that his desire for a more refined version of the Vanner was where the Gypsy horse-breeding aesthetic itself was headed. Known for their decor­ative caravans, they were also working on a more pleasing looking horse to dignify their transport. The philo­sophy at DeerFields is that bringing these horses along honours their Gypsy developers. 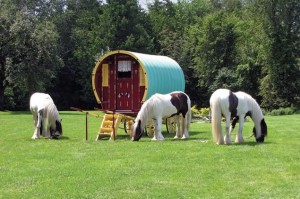 A caravan hand-built by David Bryan. Photo by Ben Radvanyi

Driving trainer David Bryan speaks quietly to the young Gypsy Vanner in harness as I look on. After only a few weeks, the gelding responds easily to his lilting voice commands, pulling like an athlete while working down the arena’s fresh track. A Gypsy of Irish and Welsh descent, 78-year-old Bryan was born in a caravan and travelled the Welsh countryside with his family until his father gave it up in 1955.

A farrier and horse-trainer by trade, Bryan carried on, raising horses, blacksmithing and, to the delight of a younger generation, building car­avans. As fortune would have it, he now resides in nearby Stayner and is able to work with DeerFields’ driving prospects as they reach maturity.

This current trainee, a gelding, is rock steady. Earlier in the month and only shortly after breaking, the horse was shipped to his first demonstra­tion, a distressingly busy environ­ment. There was a hunt, jumpers, all kinds of activity, and Bryan thought, “This is the day we go into the stands.” But the horse didn’t put a foot wrong. Impressed with the Vanner’s develop­ment, I ask the soft-spoken trainer if all his projects are so tractable. He ruefully answers, “If you get a bad’un, you know’t.”

“The Vanner was bred to work,” says Bryan, reminiscing on his own long career with horses and his current vocation of caravan building. His hand-built, one-off, horse-drawn vehicles carefully replicate the wagon Bryan was raised in: solid, comfort­able and lushly upholstered. While “caravanning” might seem unusual in this part of the world, Bryan says there is a resurgence of interest in this Old-World RV in the British Isles and parts of Europe, where summer caravanning is a national pastime. His current commission is for a Vanner fancier in Kingston, Ontario, who plans to travel and demonstrate the age-old working relationship of man and beast.

I tell Bryan that my father’s parents met and courted, dancing and sing­ing around the fire to Gypsy violins. It was outside their respective villages, somewhere on the borders of the old Austro-Hungarian Empire, where young people would gather at caravan circles to socialize. My grandfather always thought that my generation was so sad: “You do not sing and dance.”

DeerFields now employs four trainers, who school this calm and versatile horse for both competitive and recreational riders, as well as for driving. The horses are taught to cue to voice commands, making them safe and suitable for beginner to mature riders. 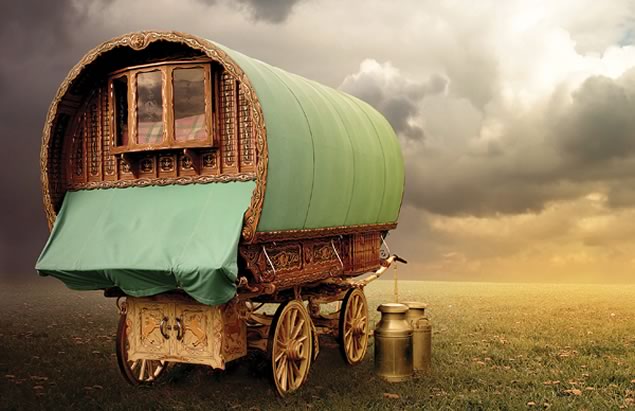 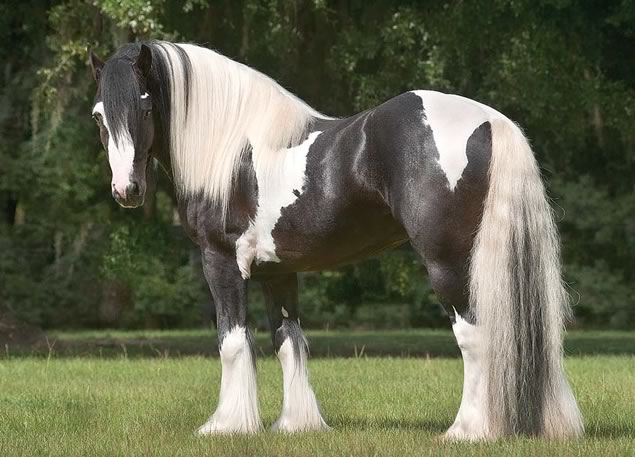 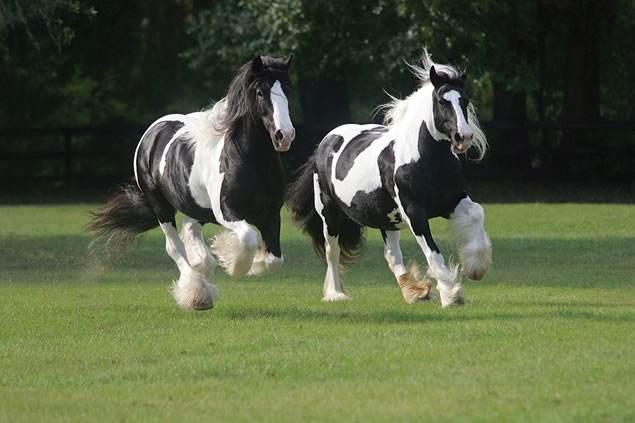 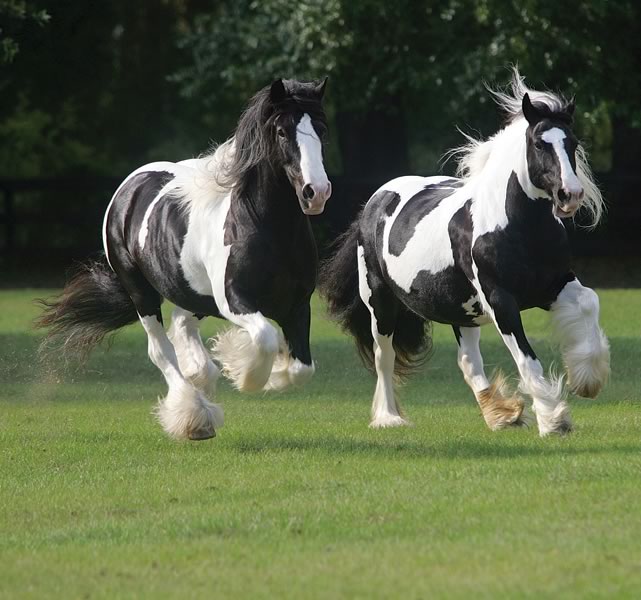 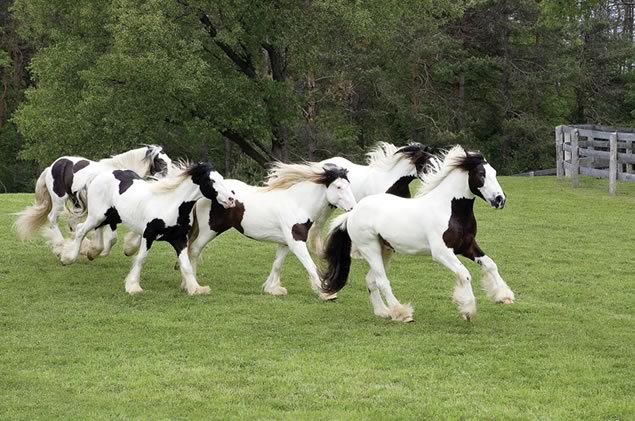 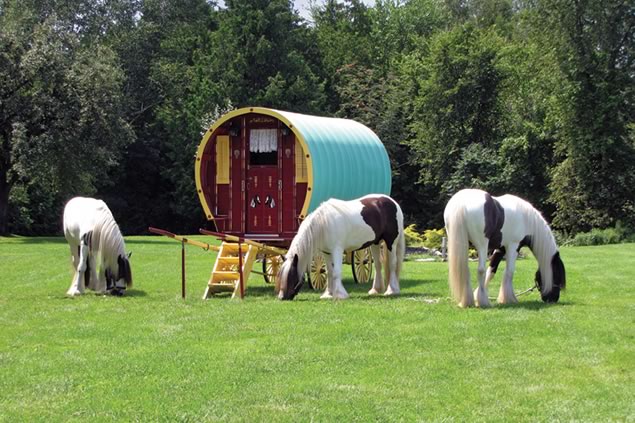 <
►
>
The Gypsy Vanners of DeerFields: The versatile, friendly and compact Vanners are often compared to golden retrievers for their companion-animal qualities. Photo by Ben Radvanyi

For more information on DeerFields, including various forms of club membership, see deerfieldsstables.ca

Rumour has it that DeerFields’ logo, featuring a crown that curiously re­sembles that of Crown Royal whisky, derives from a familial tie to the Seagram distilling fortune. Wilson laughs at the notion, a twinkle in his eye. His business background is third generation in his family’s trucking business and any resemblance to the whisky logo is purely coincidental. He emphatically describes the devel­opment of the crown logo as an association with kings and queens. “We want everyone who comes here to feel like royalty,” he says. “You will not be treated better.”