A highly selective guide to the picks of the fall season in the Hills of Headwaters.

About 400 people are taking a long stroll down memory lane together via Facebook, where a group called “I grew up in orangeville and surrounding area, I remember when…” is attracting dozens of posts a day – more than 2,000 in its first two weeks of existence.

Members describe the page, created by April Glagow, as “addictive.” From Fairburn’s gas station to high school hijinks to the long-gone drive-in, if you were ever connected to Orangeville you’ll find faces and memories you hold dear, plus some you forgot.

Another group, “Orangeville Classmates and Friends – Where Are You Now,” allows users to search for people they’ve lost contact with, and includes a “Gone Too Soon” section, to remember those who died before their time.

Everyone can read posts by signing into Facebook and searching “I grew up in Orangeville and surrounding area, I remember when…” To include your own, ask an existing member to add you to the group.

They’re called Sweet Adelines, and this year the more than 50 women who make up the Orangeville Chorus are celebrating 30 years of sweet harmony. Under the direction of Joan Borden and Pat Vipond, the chorus kicked off their anniversary in April with a gold-medal performance at an international competition in Syracuse, New York, and held a sold-out local concert in June. They’ll be presenting their four-part a cappella arrangements again this fall during gala matinee and evening performances on November 5 at the Town Hall Opera House in Orangeville, with a reception between the shows.

And if all that joyful music gives your vocal cords an itch to get singing, you can do just at the drop-in rehearsals the chorus offers for three Wednesday evenings this September at the Horizons Event Centre on Highway 10 in Mono.

Tickets for the November concert tickets are $30. Reserve at 519-942-3423. For more information about the chorus, including the drop-in rehearsals, see orangevillechorus.com

Must go down to the farm 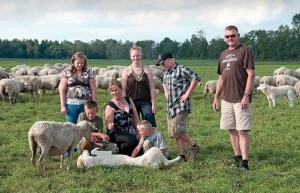 East Luther sheep farmers Peter and Elly van der Veen and family are among those who will open their farm gates to visitors during the Dufferin Town & Country Farm Tour. Photo by Pete Paterson

We’re surrounded by farmland here in the hills, but the truth is a lot of us have no idea what it really takes to produce the food we eat. On Saturday, October 1, the Dufferin Town & Country Farm Tour gives you, and your kids, a passport to see first-hand what’s on the other side of the farm gate.

The self-guided tour will take you to working sheep, dairy, beef, alpaca and horse farms in Amaranth and East Luther, as well as to the ecological wonderland of Luther Marsh. Along the way, you’ll get up close to the animals, talk to the farmers and view various farm-related displays and demonstrations. There will also be plenty of opportunity to purchase local produce.

The tour takes place rain or shine from 9 am to 4 pm. You can pick up your passport from 9 am to 2 pm at the Hills of Headwaters Tourism Information Centre at Highway 10 at Buena Vista Drive in Orangeville. The only admission requested is a food bank donation.

Even with the death last year of the last Canadian veteran of the Great War, and with the numbers of living veterans of the Second World War diminishing, attendance at both national and local Remembrance Day services is increasing. Many of the faces at those ceremonies now belong to young people whose personal connection to the great world conflicts of the 20th century is only through scraps of stories or faded mementoes passed on from their grandparents or great-grandparents.

Perhaps it is the very loss of those living voices that has inspired a new generation to pick up the solemn promise never to forget. And perhaps it is also because, on some local cenotaphs, among the weathered names of those long-dead soldiers, are etched new names, sons and daughters of our communities who died in Afghanistan – their freshly inscribed names the only visceral link for many of us to a distant and complicated conflict.

For information about local Remembrance Day services on November 11, contact your local branch of The Royal Canadian Legion or town office.

Must love your library

When Margaret Atwood recently tweeted her followers to sign a petition to save the Toronto Public Library system from Mayor Rob Ford’s proposed funding cuts, the TPL site crashed from the overwhelming response. But it’s not just city folk who love their libraries.

While many communities have a Library Week, for the past 13 years, Caledon Public Library has celebrated a Love Your Library Month. And this October the celebration is extra special as CPL launches a spiffy new logo, new extended hours at all branches, a new lending card (including a key-chain version – so no more pocket searching), and a streamlined new website that promises to be more user-friendly.

Celebrations, including entertainment, kids’ activities, and salutes to long-time staff and volunteers, are scheduled throughout the month at each of the CPL’s seven community branches.

Check your local branch for details, or contact the main office at 905-857-1400; caledon.library.on.ca