My father taught me to appreciate the very much bigger and very much longer story of trees and the people who love them.

For decades, artist William Scobie Houstoun (1914–2005) explored the Caledon hills and beyond, seeking the trees – remarkable trees, majestic trees, solitary trees, enduring trees – that became the focal point of many of his works. In this personal reminiscence, the artist’s daughter fondly remembers her father’s passion for trees and the lessons she learned from him.

In our family archives there is a photograph of a young man carrying a girl-child on his shoulders. She is clinging to him, her soft curls partially covering her chubby, little face. They are smiling. He is looking up and back, his strong hands gripping her small, leather boots and ankles to keep her steady. She is looking forward, clutching his straight, blond hair, like a horse’s mane. They appear to be quietly reassuring each other, their rapport and trust self-evident.

I am the child in that snapshot. The man is my father, William Scobie Houstoun, graphic designer, art instructor, gallery owner – and artist. 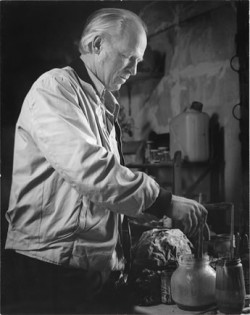 William Scobie Houstoun: Beyond the edges of all human-made images, there are always other, bigger stories.

My father was little more than a child himself when he knew he wanted to be an artist. As an adolescent in the 1930s, he attended Toronto’s newly opened Western Technical School where he studied with teacher L.A.C. Panton, who was then becoming a force in the Canadian art world.

With Panton and other artists and teachers, groups of students often set off on sketching trips to the surrounding countryside. The students were encouraged to show their understanding of form and line, tone and colour, by designing compositions inspired by trees and other elements of the natural landscape. These early influences helped shaped my father’s artistic sensibility, inspiring his abiding passion for the natural world and instilling in him the lifelong creative habit of drawing and painting his subjects, most often trees, in their living environment. Throughout his life, he loved to travel the countryside in search of inspiration.

My father left Western Tech before graduating to accept an apprenticeship in a commercial art studio – a rare employment opportunity for a young artist during the Depression. Outside working hours, he continued to nurture his need to express himself through fine art.

It was during this period that my father became part of Toronto’s vibrant creative community. At the time, The Arts and Letters Club was the lively hub of the city’s artistic life, frequented by Panton, members of the Group of Seven and other regional artists, and Father enjoyed sharing ideas with members of that group as well as other established and up-and-coming artists.

With the advent of World War II, hoping to serve his country as a war artist like Charles Comfort, an older colleague and mentor, my father joined the Royal Canadian Air Force and was assigned to design campaign posters and propaganda materials. It was during this service that he also met his future wife.

Once peace was declared, Father re-established his career as a commercial artist, becoming a successful art director. In 1950, in what was a turning point in his personal creative journey, my parents bought a 100-acre farm on Airport Road, just north of the village of Tullamore. There, his children grew up and he continued to commute daily to his job in Toronto until 1967.

At age 53, he gave up his commercial art career and founded the Tullamore Gallery in a historic building that had once served as the Orange Lodge. He had it moved from its original location in the village to the orchard next to our house and, for the next few years, he devoted himself full-time to his personal fine art pursuits. 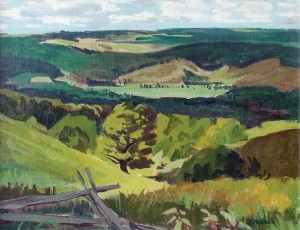 Then, in the early 1970s, he seized another creative opportunity when the Canadian government commissioned him as a field artist with the Canadian peacekeeping forces in Cyprus. Selected works from that commission are now in the collection of the Canadian War Museum. On his return home from Cyprus, he accepted an invitation to teach at Humber College, where he helped set up the art and design program and recruited other Toronto-based commercial artists to the faculty. Following his retirement from the college, he again turned full-time to his art, travelling widely and completing many larger format canvasses.

During our childhood years, my siblings and I were given a continuous supply of papers, coloured pencils, crayons and paints. We were encouraged to read, write, draw and make pictures. We were also introduced to a variety of other cultural activities and given the choice of music or dance lessons. And each of us learned to ride and care for the small herd of ponies and horses we had gradually acquired.

Father taught us how to look, listen and learn by observing the wider world. Sunday afternoon drives became routine, the family piling into the car and heading into the hills for a picnic and, of course, to sketch the landscape.

On these trips – and many others that he took with colleagues, including the artist D. Mackay Houstoun (1916–2004), his younger brother – Father’s attention was always drawn to trees. His enduring fondness for both deciduous and coniferous trees was a constant theme in his work. He drew portraits of trees the way some artists draw people, individually and in conversational groups, and his portfolio of work eventually became a commentary on the spirit of the place where he lived.

Father always searched for trees with unique characteristics. He was especially fond of tall trees that towered like sentinels and of old trees that had withstood the ravages of time. He admired their tenacious stoicism, their dignity and courage. 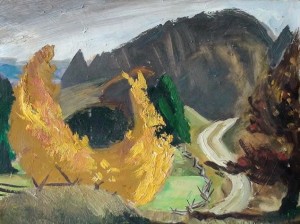 Father encouraged me to draw and paint pictures of trees as a way of getting to know them, and we often created studies of the same trees and the same places using similar materials and similar approaches. This established a very companionable relationship that changed very little during the several decades we worked together.

My father’s comments – in words, drawings and paintings – helped me to see the natural world in different ways and instilled a sense of respect and reverence for trees, their strengths and vulnerabilities. I learned to appreciate the way they anchored themselves to rocks and soil, serving as hopeful, sometimes sombre reminders of universal human themes.

Our family albums contain many photographs of the places we worked together. My father admired photographic technology, but he preferred the pure and direct simplicity of low-tech tools: pencils, paper, canvas and paint. He taught me that beyond the edges of all human-made images, there are always other, bigger stories – and he taught me to appreciate the very much bigger and very much longer story of trees and the people who love them.

In his portraits of trees, he developed a portfolio of work that became a commentary on the habitat of the region. Among his “landscape portraits” are some of the answers to the poignant question that so many people ask, and that he so often asked himself: “What endures?”

This memoir was edited by Dyanne Rivers from L.P. Patton’s extensive notes and reflections about her father. L.P. Patton is a regional artist and former teacher. 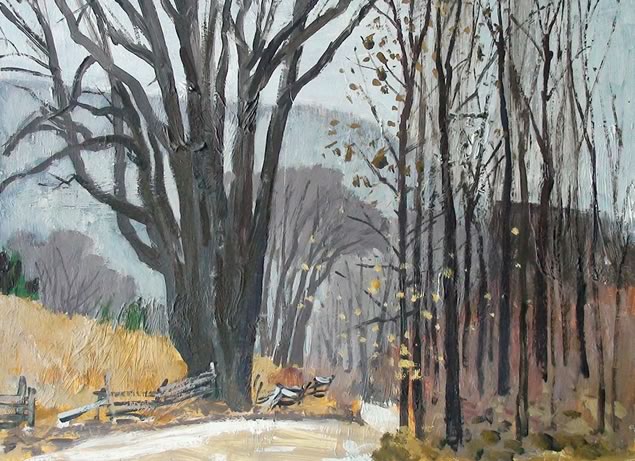 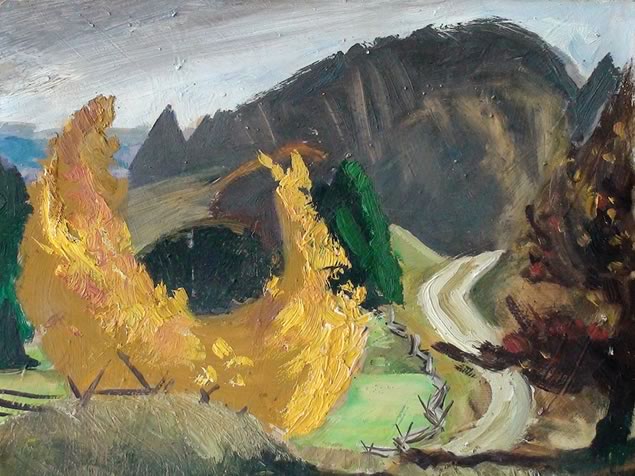 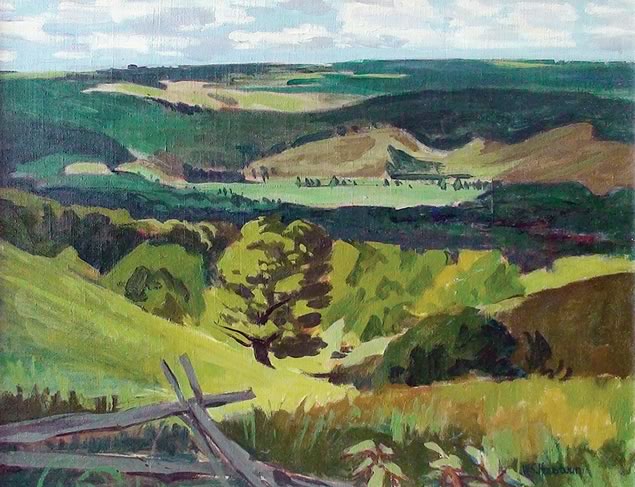 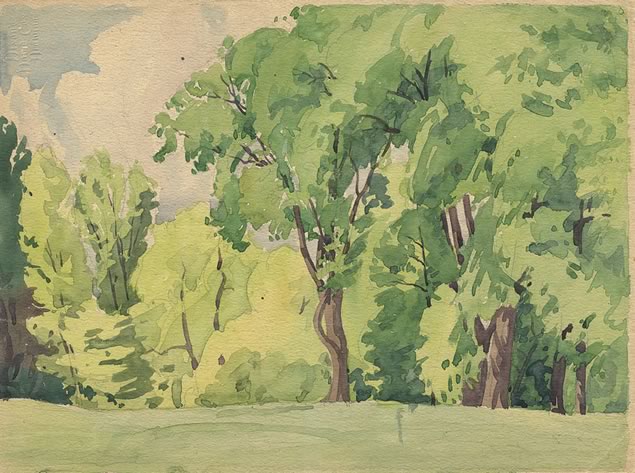 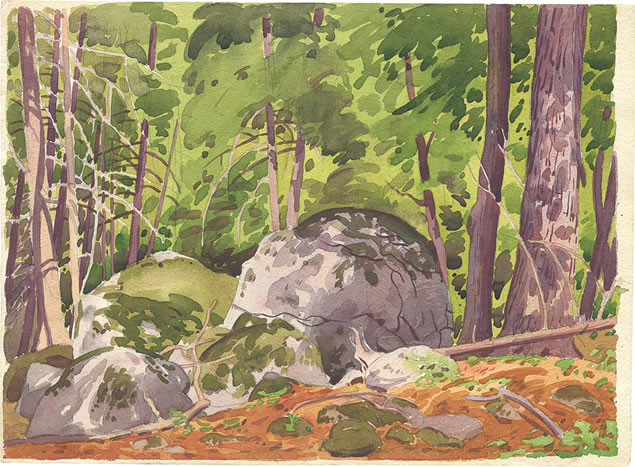 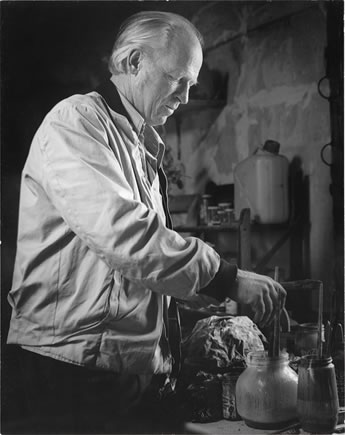 About the Author More by L.P.Patton