People participate in a given sport for any number of reasons. Perhaps it’s the camaraderie of golf, or the aerobic expenditure of squash, or the peacefulness of kayaking. For those who snowshoe, the main attraction is the ability to venture off the trail. Rick McCoy, an enthusiast who organizes snowshoeing events for the Dufferin Hi-Land Bruce Trail Club, says, “I almost prefer snowshoeing [to hiking] because of the freedom from having to walk down one path. You get to explore.”

That description sold the sport to me, so I arranged to head out to Forks of the Credit Provincial Park one brilliantly sunny day with Barb Campbell, an experienced “snowshoeer” (snowshoer and orienteer) from Palgrave. She agreed to show me the ins and outs of snowshoeing, with some bonus instruction on orienteering.

Orienteering, according to the Canadian Orienteering Federation, “is the sport of navigation with map and compass … The object is to run, walk, ski, or mountain bike [or snowshoe] to a series of points shown on the map, choosing routes – both on and off the trail – that will help you find all the points and get back to the finish in the shortest amount of time.” It’s something Barb has done competitively and recreationally, often with the Caledon Navigators, a group dedicated to year-round orienteering.

Barb provided me with a pair of lightweight metal snowshoes, about 18 inches long and 6 inches wide. They bore no resemblance to the old wooden beaver tails of my childhood. I slipped my trail runners into a rubber harness and pulled three straps tight. It was quick even with cold fingers. Don Coates, who sells snowshoes in his Inglewood store, Caledon Hills Cycling, says these new “low-profile” snowshoes are quite small, have easy-to-use harnesses, and range in price from about $125 to $250.

While the snowshoes Barb and I were using were not intended for soft, deep snow (you would sink in), they had aggressive grips on the bottom that, as I was to learn, would allow me to climb up and run down some very steep slopes. In addition to being ideal for orienteering, these snowshoes would be great for the kind of recreational, out-for-an-hour-or-a-day activity one might do here in the hills.

In an interview, Orangeville snowshoeing enthusiast Carol Sheppard told me she and her husband Ken “are out every weekend once the snow comes.” Carol switched from cross-country skis to snowshoes when she found that the speed of going downhill on skis unnerved her. In addition to the enjoyment of going off-trail, Carol said, “I like the control of snowshoeing.”

It’s a sentiment shared by the Town of Mono’s deputy mayor Ken McGhee. He and his wife Gwynn use their snowshoes almost every day in the winter when they are walking their dogs. “You don’t need a groomed trail [as is best for cross-country skiing]; you meander where you want to go.”

But snowshoeing is not only a sport for people interested in a peaceful walk. It can be a fantastic workout if that’s what you are after. The weight of the snowshoes makes it more strenuous than walking. Add a pair of ski poles, as many people do, and some deep snow, and you’ll soon be shedding a layer of clothing.

Back in Forks of the Credit park with Barb, I had an opportunity to test the sport for myself. We’d warmed up with a short hike down to a kettle lake covered in untrodden snow. We couldn’t resist the temptation to make tracks, so we crossed the lake enjoying the silence and the warm sunshine. We also used the opportunity to try running, something that proved to be easier than I’d expected with a big hunk of metal attached to each foot. 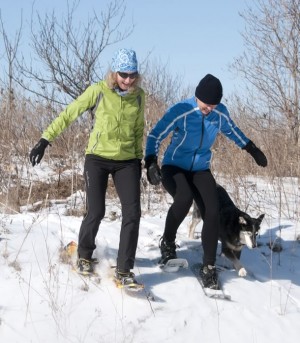 Next, Barb wanted to demonstrate just how versatile snowshoes are. We were standing atop a small hillock that dropped down a steep bank. Barb instructed me, “Run down that slope.”

I looked at the incline and thought, I wouldn’t walk down it in running shoes, much less run down it on snowshoes. So she demonstrated, and sure enough the grips on the bottom of her snowshoes gave her great traction. So off I went too, and quickly realized how this unusual form of footwear could expand my winter explorations. Snowshoes would not only allow me to navigate down steep, slippery banks, but let me climb up them too.

Now I understood why Carol said that when she heads out it’s usually to climb to the top of the Pinnacle in Mulmur or through Hockley’s steep hills and valleys.

I was also intrigued by one of the adventures offered by the Dufferin Hi-Land Bruce Trail Club. Twice a winter Rick takes people out for a moonlight snowshoe. “It’s absolutely fantastic to go out on a clear night with a full moon,” Rick explains. “It’s very peaceful.”

Barb and I didn’t require our compasses to find our way back to our cars, but she showed me an orienteering map for the park and demonstrated how to use a compass. It was a great lesson from a pro – Barb is not only a fit adventure racer, she’s a tremendous navigator. But competitive as she is, even Barb admitted the greatest thing about snowshoes is that they allow you to explore the countryside.