Help the turtles by signing a petition being circulated by Friends of Ontario Snapping Turtles.

Turtles are probably the most endangered vertebrates in Ontario. Seven of eight native species are now considered “ at risk.” The threats turtles face in the modern era are numerous and lethal.

They recoil from the loss of wetlands, they die by the thousands on our roads every year, and their eggs are eaten by raccoon populations that have grown artificially high as they feed on our crops and our garbage. 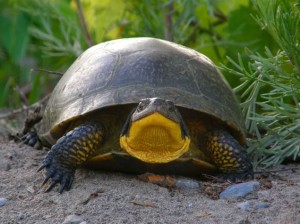 Turtles are illegally collected and sold into the pet trade. Incidental collection occurs as well, when otherwise well meaning people take them home and confine them to an aquarium.

Taking a turtle home as a pet ultimately has the same effect as crushing one under the wheels of a car – a captive turtle, like a dead turtle, has had its precious genetic inheritance removed from the population.

Another threat that has surfaced recently is the capture of turtles for human consumption. In 2007, a Toronto man was arrested when authorities discovered he had 26 threatened Blanding’s turtles and one endangered spotted turtle in his possession. They were likely destined for Toronto restaurants.

Incredibly there is an open season in Ontario allowing the “harvest” of snapping turtles, a species now listed as “Special Concern” because of threats to its future in the province.

A petition is currently being circulated by a group called “FROST” (Friends of Ontario Snapping Turtles) to ban this practice. If you would like to participate, visit FROST’s website at http://frostpetition.webs.com/ Petitions need to reach the Ontario Legislature by February 15th 2012.

Painted turtles are most common turtles in the hills and currently the only species not considered “at risk” in Ontario. We still have snapping turtles and there are historic records of a few Blanding’s turtles and spotted turtles in this area. They all need our help.