On the calm, early morning waters of Island Lake, rowers get a healthy head start on their day.

I’d hiked by the Island Lake Rowing Club on Orangeville’s outskirts a number of times, but this was my first venture past the gates. Inside the 3,500-square-foot boathouse that stores some 40 “rowing shells,” I met Cathy Wilson and Brent Kane, both of whom row, compete and coach at the club. They’d agreed to give me the lowdown on a sport that had intrigued me since Canadian rower Silken Laumann made her miraculous recovery from a leg injury and won bronze at the 1992 Olympic Games in Barcelona.

The evening light streamed into the simple building through enormous doors that open onto the Island Lake, reflecting on the near mirror-like water. I was lucky. Normally, rowers rise at the crack of dawn to get such calm conditions. I asked Cathy if you need to be a morning person to love this sport.

“When I told my husband I wanted to row and that I had to be here at 5:45 three times a week,” Cathy explained, “he just started laughing.” But it took her only three days to become addicted to the sport. Moreover, her three sons were soon getting up early to row too – and all of them carried on to be varsity rowers at university.

Long, sleek rowing “shells” are truly sensuous boats. They make a kayak or canoe seem like an awkward second cousin. They are pretty tippy too. Fortunately, the double Cathy and I would take out was a “tubby” one, good for training because of its relative stability.

Brent said he lived in Orangeville for several years before he discovered the rowing club. When he finally did, he quickly became enamoured with the sport. “Coming out here every morning is like waking up at a cottage,” he explained. “Sunrise, nature around you. It’s amazing. It gives you a reason to go to work.”

Brent pointed out the parts of the shell, which are straightforward except the stern is the bow and the bow is the stern, because you row backwards. Riggers hold the long oars, and oarlocks keep them in place. There is a small seat that moves back and forth on slides or rails. The moving seat allows rowers to use their legs as well as their arms. “Despite what most people think,” Cathy explained, “rowing is 80 per cent legs and only 20 per cent arms.”

Brent and Cathy advised me to be very careful with the boat. Our Swift recreational was worth about $5,000, which is expensive enough, but not nearly as costly as the bigger composite-carbon-fibre racing boats that can put you back $15,000 or more.

Cathy climbed deftly aboard, fit her feet into the shoes attached to the boat and picked up her oars. In the “catch” position, Cathy was scrunched up at the front of the stroke, with her knees tucked under her chin. Holding the oars, her hands were well out in front and the oar blades back behind. As she dipped the oars into the water, she straightened her legs, the seat slid back and she pulled her hands into her rib cage until the oar blades were out in front. Then she raised both oars and slid forward to the catch position. It sounds complicated and, indeed, it does take co-ordination.

Rowing is a highly technical sport. “It’s only one stroke,” Cathy explained, “but you spend years perfecting it.” It’s all about how you use your legs, how quickly you pull the oar out of the water and feather it, how you keep time with your fellow rowers.

Then it was my turn. I put both feet in the centre of the boat and managed to sit down. Using only one oar, I tried a few strokes. By then, we were about 40 minutes into my condensed lesson, and it was time to push off. Cathy, who sat in the stern of our shell, that is, in front of me, began to stroke and I followed as best I could. “Keep your wrists flat,” Brent advised from his coach boat. “Curl your wrists when feathering the oars. Make sure you use your legs first, then your arms.”

It was a lot to take in. But I managed to get the stroke down enough so I got a sense of the rhythm of the sport. The water was dead calm and I snuck a peek at John, a rowing club member who was out on his single. Silhouetted by the evening sun, his boat skimmed the water. Quiet, calm, peaceful. 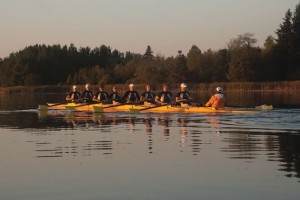 The club has about 250 members; 120 of them are high school students from either Mayfield or Orangeville District secondary schools. These keeners arrive early. The Mayfield students are there between 5:30 and 7 a.m., followed by those from ODSS. The club is well equipped with rowing shells, coach boats and coaches. And it has numerous programs that cater to rowers of all abilities, including people with disabilities. Its Learn-to-Row programs involve either a weekend-long course (June 23 and 24) or you can opt to attend six sessions on Tuesday and Thursday mornings or evenings during July.

Cathy noted that most of their active members are women in their late 30s and early 40s who can get away for a few hours because their kids are a little older. “They are looking for something they can do that is just for them.”

The Island Lake Rowing Club is also turning out some accomplished rowers. Cam Sylvester, the young Olympian who grew up in Caledon, began his rowing career on Island Lake. In 2011, Matthew Wortley, who rowed on Island Lake during high school, won gold in the under 23 division of the National Rowing Championships. Cathy and her crew competed in the charity program of the Head of the Charles Regatta in Boston (known as the Wimbledon of rowing competitions in North America). And women’s Olympic team member Sarah Bonikowsky trains here when she’s home in Mono,

I had a wonderful evening on the lake. The sport obviously requires technical skill, fitness and team effort. I’m not sure that I would take to the early mornings with Cathy’s zeal, but I could certainly spend long hours getting the flow of the stroke as my shell skimmed the water and the sun climbed up over a wakening Orangeville.