An allée of ‘Profusion’ crabapples at Lilactree Farm in Mulmur.

Brian and Maureen Bixley first began gardening around their Mulmur farmhouse some four decades ago. From season to season, the mature garden is a welcoming, carefully planned maze of leafy cloisters and blooming pathways breaking into long vistas across the countryside.

Winter is both too long and too short for the ardent gardener. It is too short because the summer garden has consumed us, we have neglected our books, our music, our friends, and now winter offers the chance to recapture them. 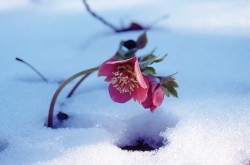 Like the garden itself, we need a restorative time. And we need a space to contemplate, to reflect on what went well, what needs rethinking, how we can pursue what Francis Bacon called the “greater perfection,” while remembering that gardening is the ideal form of artistic expression for the irresponsible; we can always blame Nature.

Certainly there are tasks that could use attention – cutting back the Carolina beech hedge, knocking the heavy snow from the tops of the cedar hedges so they don’t split open, cutting out a dead limb or one that has simply had the misfortune to extend itself in the wrong direction.

But winter is too long because what we really want is to be back in the garden, chilled and wind-burned, pulling aside the mulch to see if there is any sign of a plant we know cannot possibly be winter-hardy, sniffing with pleasure the dubious odours of the reviving landscape, clearing away the mysterious, uninvited winter debris, edging the beds, peering for the first snowdrop and the first crocus, putting out the garden furniture, like an art dealer getting her gallery in order for the next exhibition.

We are fortunate at Lilactree Farm that the many hedges and fences provide a structure whose geometry is only softly diminished by drifting snow. Many of the trees have bark of great interest (the peeling, cinnamon bark of the Chinese paperbark maple, Acer griseum; the green and white striped bark of the native moosewood, Acer pensylvanicum; the bright red stems of the Japanese maple, Acer tschonoskii).

Others have fascinating shapes, like the towering zelkova at the entrance to the Barnyard Garden, or the gaunt Kentucky coffee tree in the New Field. We rejoice at all this – “You should have an open garden day in February,” said a well-wrapped friend – but we are waiting for spring.

The conventional concept of spring in southern Ontario is that it perishes almost as soon as it arrives. It is true we do not normally enjoy the long, slow spring of the temperate climates of northern Europe. To extend our spring, we need to reach backwards into the cooler weeks of April and early May, we need to embrace those chilly days and nights as gardening moments to be savoured, not merely endured, even if our expectations are sometimes thwarted.

“Is the spring not an evil time, that excites us with lying voices?” asks a character in The Family Reunion, as the snow flurries return. When we announce an open garden day in late April, we often hear the comment, “But what will there be to see?” The answer is: a great deal.

A Garden Diary entry for March 20, 2011 announces the beginning of the floral deluge that will make April one of the most thrilling months in the garden year: 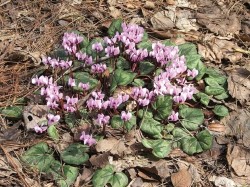 Cyclamen coum, one of three cyclamen species hardy in the garden with some winter protection.

Many snowdrops already visible have been joined by the first golden winter aconites … My eye was suddenly caught by a substantial patch of rosy-pink flowers (of) Cyclamen coum … had shrugged off its mulch … I sprawled out, torpedoed my way under some shrubs and counted the flowers – there  were at least 70 – and I could see nearby siblings urgently pushing through their cover. Many Leucojum vernum in the Acid Bed and the North Jungle.

By the first week in April, the snowdrops, including a miniscule sampling of the more than 500 named forms, aconites, snowflakes (the writer Elizabeth Lawrence’s name for Leucojum vernum) had been joined by the few crocuses that were left to us by chipmunks and squirrels, the first dwarf iris and the early, mat-forming Scilla mischtschenkoana, with a dark stripe on each of its pale blue tepals. 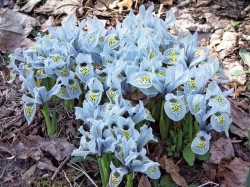 April 8: Chionodoxa (Glory-of-the-snow) now flowering freely on the Roadside Rock Garden, while two days later, good stands of Iris ‘Katherine Hodgkin’ shot up and opened by the Steps and in the North Jungle, with more to come in the Anniversary Garden. There, two clumps of Iris reticulata have begun along with the odd Iris histrioides and half a dozen Bulbocodium vernum … Many crocuses now, snowdrops looking ethereal in the South Jungle.

April 11: Snowdrops and aconites close to their best … the brown-grey snubs of bloodroot beginning to push through, many peony shoots visible, puschkinias everywhere, the great blue wave [of scilla and chionodoxa] preparing its own minor horticultural tsunami, cyclamen continue, Saxifraga elisabethae in flower in the Rock Garden, many dwarf tulips up, pink chionodoxa … a magical moment.

Many of the days and even more of the nights are cold at this time of year, frost battering down the emerging Crown Imperials, but the garden imposes demands that cannot be ignored.

Removed burlap and guards from trees in the South and North Jungles, cut out old hellebore foliage, spread gravel on the Back Porch path … clipped the yews, removed the dead Nest Spruce, moved Cyclamen alpinum from the Rock Garden to the Trough … planted a Catalpa speciosa to replace the old Manitoba maple that finally collapsed … The Nursery Garden looked very sparkling after everything had been clipped and raked … sowed seed [in pots indoors] of Tithonia rotundifolia, Salvia coccinea, Quamoclit coccinea … my back has, naturally enough, not improved. 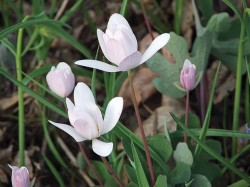 Before April is out, scilla and Glory-of-the-snow will carpet much of the garden. The rose-flowered spring daphne, Daphne mezereum, lines the east side of the driveway, while the Daphne Bank – not, as a friend suggested, a Noël Coward heroine – is at its best, the flowers of the white form of the spring daphne filling the air with fragrance. Bloodroot, single, double, pale pink appear, along with the first species tulips, while Narcissus minor sets the pace for all the daffodils to follow.

As May arrives, anemones, dog’s tooth violets and rarely-seen trilliums catch the eye. A week later, tulips dominate the Maple and White beds. The spring ephemerals – jeffersonias, primulas, pasqueflowers, fritillaries, alpine plants – race into life. The first herbaceous clematis, tiny jewels of colour, astonish visitors unfamiliar with them. Towards the end of the month blue, pink and white flowers of the vigorous Clematis alpina and Clematis macropetala will flood fences, trees and shrubs.

In the early days of May, deciduous trees and shrubs are leafless, but the hedges of cedar and alpine currant, and sometimes simply of unmown grass, guide our eyes along a peony- and daphne-lined path to a blue bench, to a beckoning obelisk, to one of the two dramatic Hart Massey sculptures seen from under the branches of an allée of ‘Profusion’ crabapples, to a small figure (to make the path look longer) cut into a “window” in a hedge, and on to the borrowed landscape of the surrounding countryside. 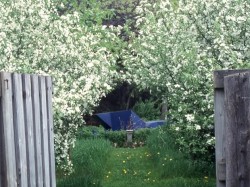 From the Nursery Garden, through Malus sargentii, to the Blue Snake in the Oak Grove.

From a wooden bench in the Nursery Garden we can gaze through an open door to a pedestal and into the Oak Grove where Ray Spiers’ Blue Snake neatly divides the space and draws the eye to the blue bench. From the obelisk at the top of the New Field Path we encounter a vista that does not exist at the heart of the garden, but must be sought – the view from the very eastern edge of the Niagara Escarpment over the ungreened fields, over discreet rooftops and slender silos and much-patched barns.

Behind us, cut into the grass, is a maze. It is a copy of the one at Hampton Court, linking one of the gardeners to an English childhood, and serving as a miniature metaphor for the garden as a whole.

By the middle of the month, many trees are beginning to leaf out and flower, though the timing is dependent on temperature as well as light. Magnolias are prominent, especially the yellow-flowered forms, but increasingly the garden is dominated by crabapples, scattered around the garden but also in formal rows. Among the latest to flower are the Toringo Crab, Malus sieboldii, lining the New Field path, and those in the ‘Profusion’ Allée.

A path descends from the Massey sculpture, runs under the overhanging flower-filled branches and leads on, if the timing is helpful, to a single row of the white-flowered Malus sargentii. It is a sumptuous moment before summer’s heat rolls in.

Lilactree Farm Garden in Mulmur is open some Sundays in April, May, June and September and at other times by arrangement. Check our calendar for open garden days. For directions and information, email [email protected]. 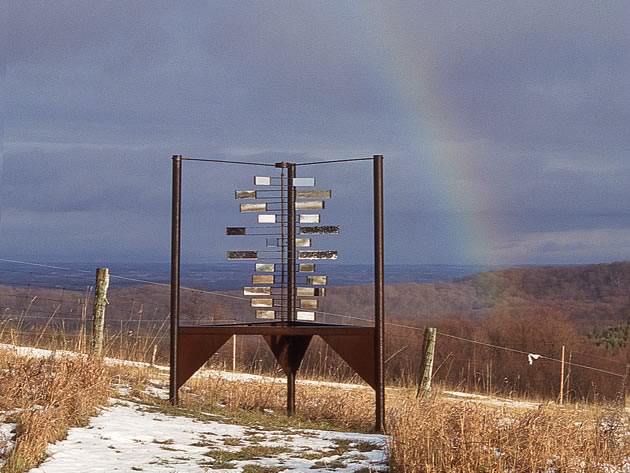 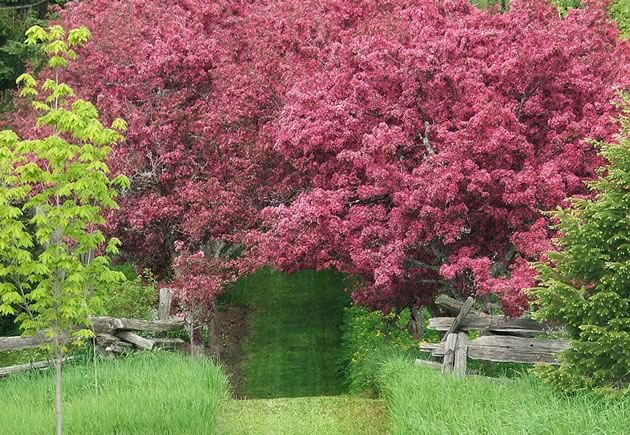 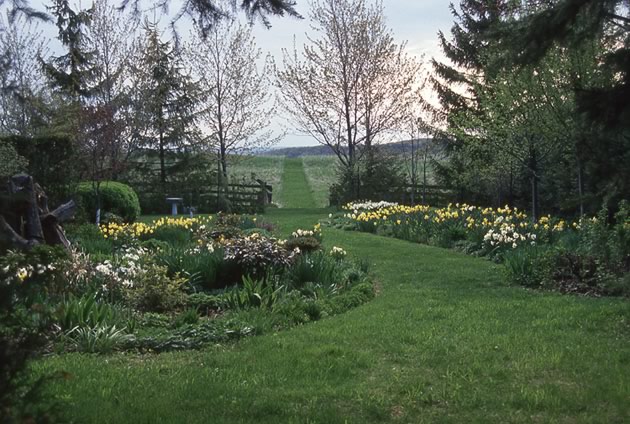 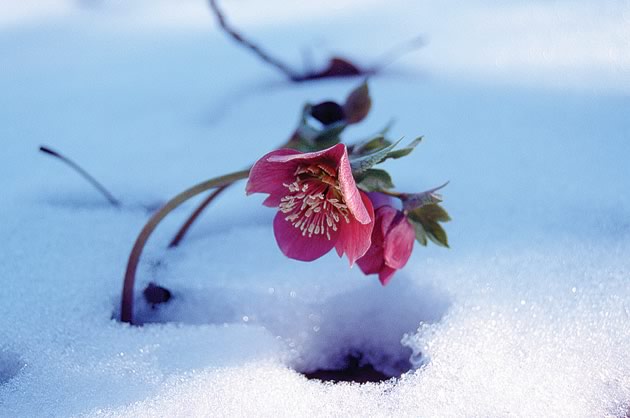 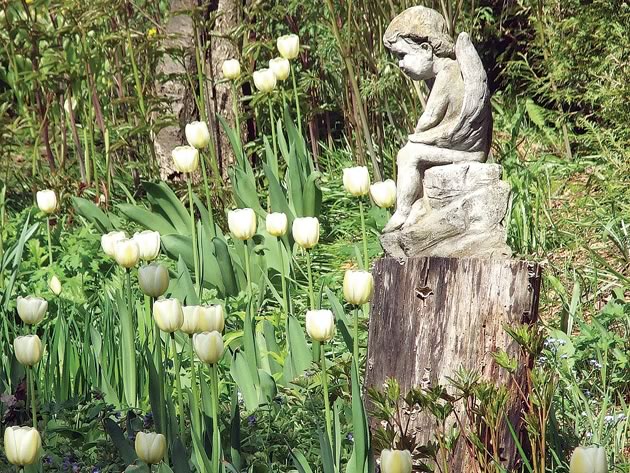 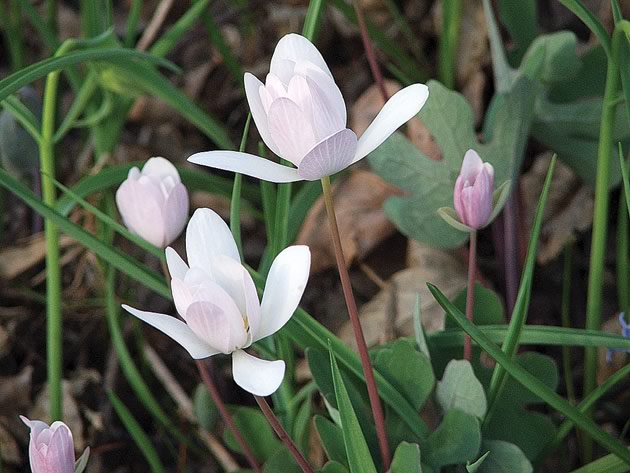 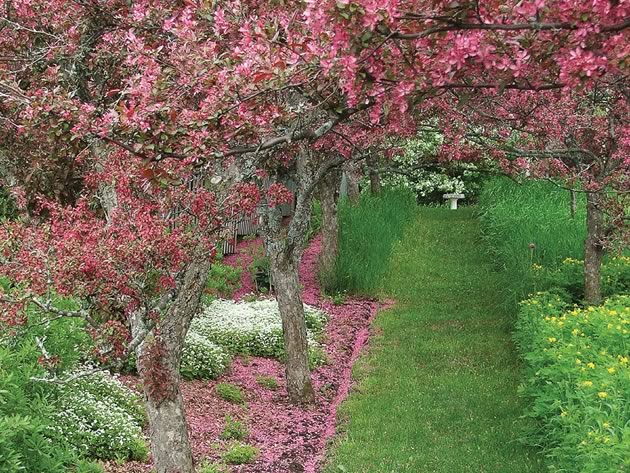 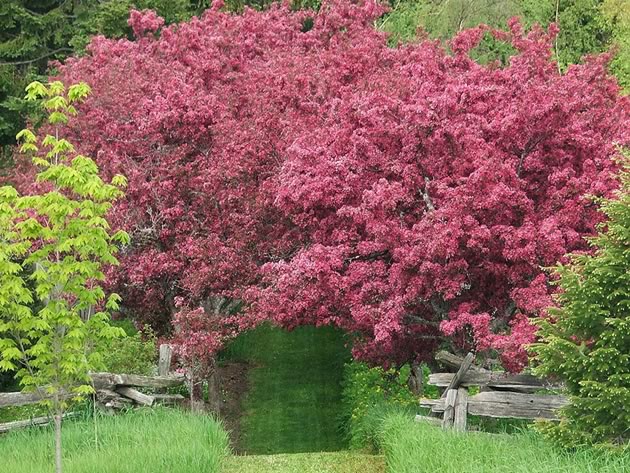 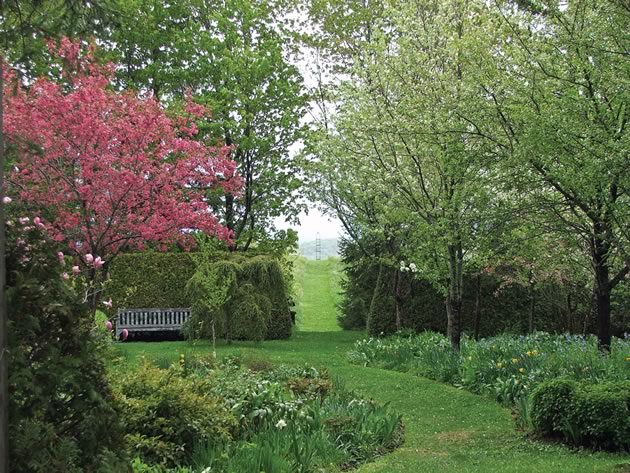 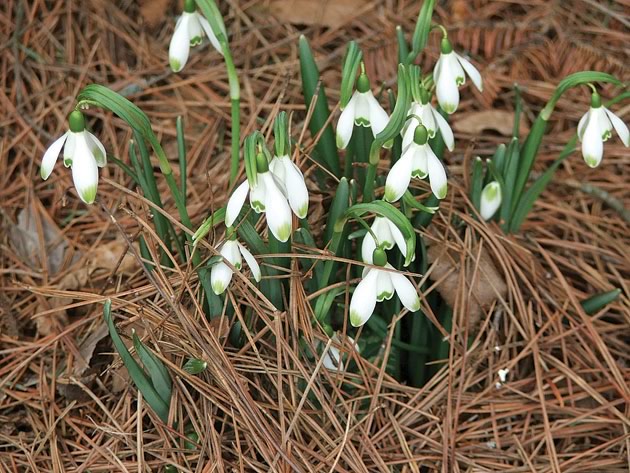 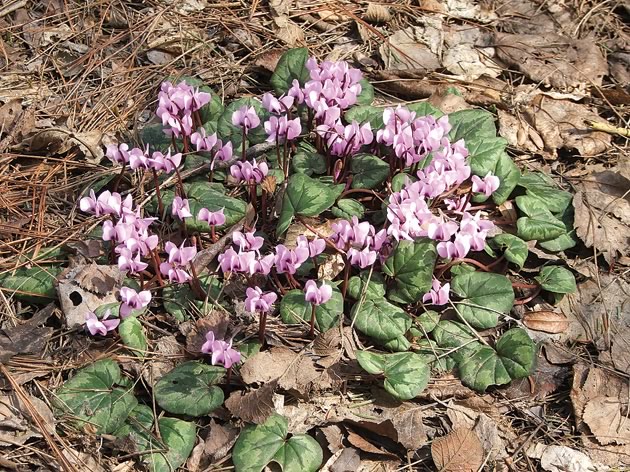 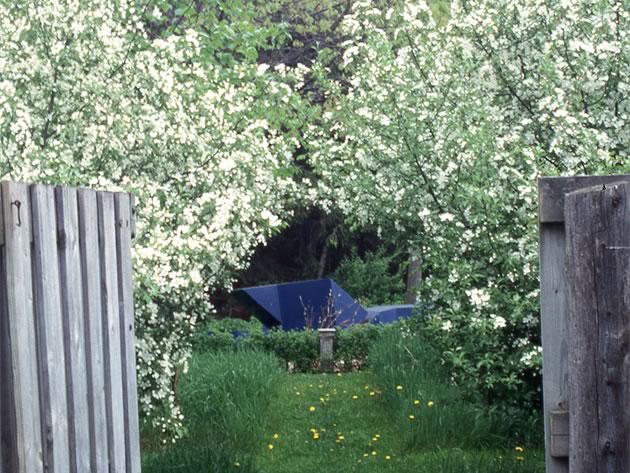 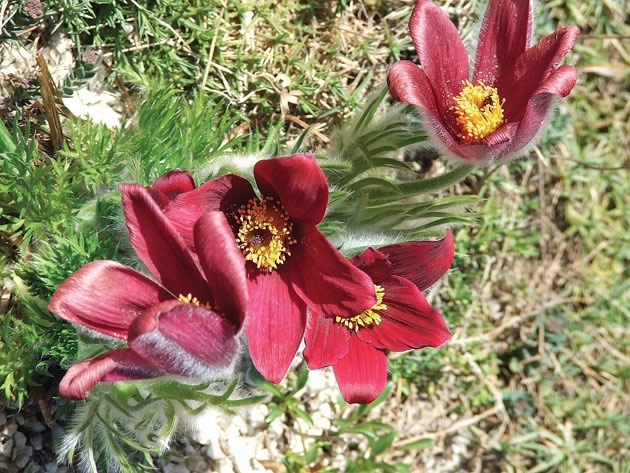 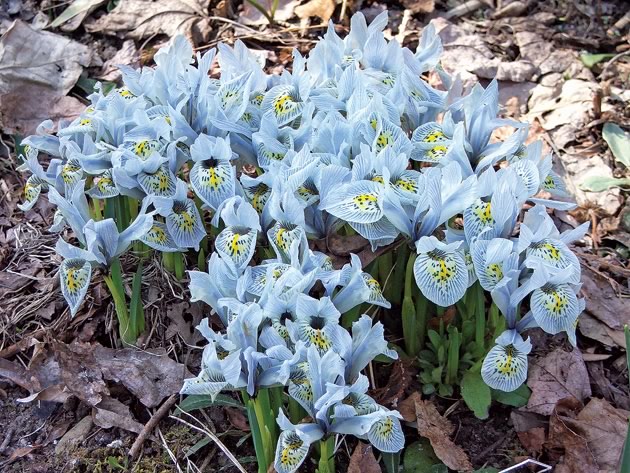 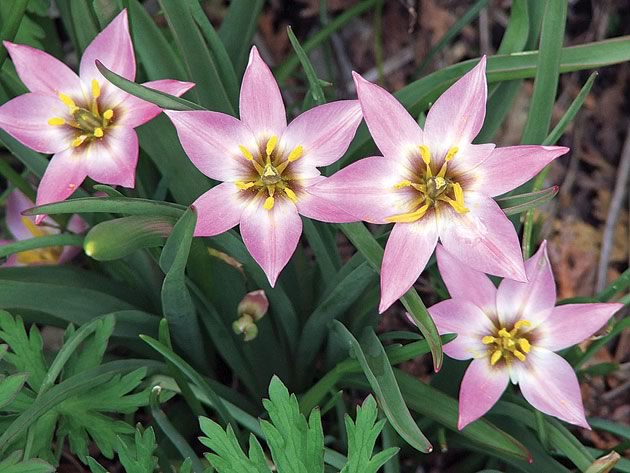 <
►
>
Through the Jungle into the New Field. Magnolia liliiflora ‘Jane’ and Malus ‘Radiant’ to the left, Virginia bluebells (Mertensia virginica) to the right.

About the Author More by Brian Bixley

Brian Bixley is the author of Essays on Gardening in a Cold Climate, available from BookLore in Orangeville.
Show 1 Comment