Up, up and away: Brampton Flight Centre offers would-be pilots“three-dimensional freedom”

I was making big swooping manoeuvres, feeling as if I were a kid running across the lawn with my arms outstretched playing airplane.

Tucked away on McLaughlin Road, south of King Road in Caledon, the Brampton Flight Centre (BFC) was a happening place when I pulled in on a gloriously sunny, but crisp spring day. I counted more than a hundred cars in the large parking lot, surrounded by almost 30 red-roofed, blue-sided buildings, the volunteer-operated Great War Flying Museum and an office complex that has two flight simulators and a hundred-seat restaurant. Parked on the tarmac were a bevy of planes, 23 of them owned by the BFC, several more were lined up for takeoff from one of the airport’s pair of runways.

Started in 1946, the Brampton Flying Club moved to Caledon in 1970 after the provincial government refused to renew its licence in urban Brampton. Today, the uncontrolled airport (meaning it has no control tower) is the 16th busiest in the country with over 100,000 landings and takeoffs per year. With 30 instructors, close to a thousand members and “parking” space for 250 planes, the BFC is the only flying school in Canada that owns an airport. Earlier this year, it teamed up with Sheridan College to offer a four-year degree in global business management, which involves obtaining a commercial flying licence. (Boeing projects a pending severe shortfall of pilots in Canada and the U.S. )

I was there for an introductory flight, my first, in a small four-seater aircraft. To begin, my instructor Jon Isaac took me through a quick but thorough preflight check of our Cessna 172. He made sure we had fuel, for example, before encouraging me to jump into the cockpit. Then he handed me headphones and the key. After more checks of a dizzying number of dashboard dials and buttons, I turned over the ignition and the prop whirred to life.

As we taxied toward the runway, Jon let me steer the plane using foot pedals. He radioed we were about to take off, picked up speed, and in no time we were in the air. Circling around Inglewood some 2,500 feet above sea level, I felt like a voyeur as I made out homes I’d never seen before, hidden at ground level at the end of long driveways.

Up we soared over the lush green Devil’s Pulpit golf course. Travelling upwards of 185 kilometres per hour, we were soon on top of the enormous gravel pits near Caledon Village. The blue water of the quarry lake where I’d often trained for triathlons sparkled as if flecked with diamonds. Flying over Orangeville, we climbed to our cruising altitude of 3,500 feet. 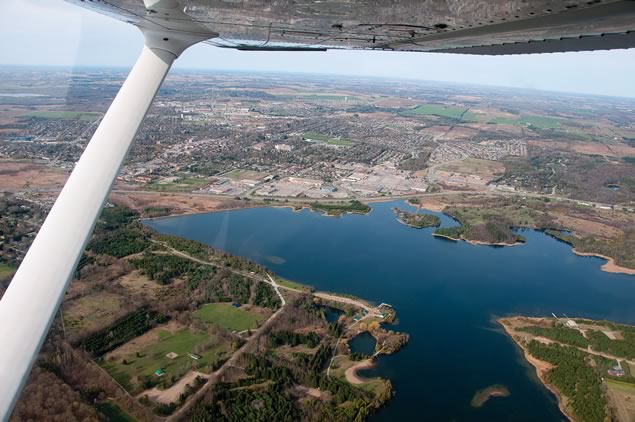 A wingside view of Orangeville and Island Lake. Photo by Pete Paterson.

Jon told me to split the horizon with the nose of the plane so the view was two-thirds sky and one-third land, then he handed over the controls. With shaking hands, I steered toward Shelburne. In minutes, seemingly tiny windmills dominated the landscape as if some Dutch child had been playing with LEGO. Jon had me change the Cessna’s “attitude” by pulling the “steering wheel” to raise the plane’s nose, or pushing it to head down toward the ground.

He demonstrated how to bank and turn the plane. Back in “control,” the next thing I knew, I was making big swooping manoeuvres, feeling as if I were a kid running across the lawn with my arms outstretched playing airplane. It was that fast and that simple.

We zigzagged over Luther Marsh, and way too soon we had to head back. I asked Jon if we could pass over my little house in Belfountain, and he turned the plane toward Caledon Lake and Alton. I guided him down Shaw’s Creek Road and, as we passed over the village, I saw the green metal roof of my little house perched on the edge of the deep, horseshoe-shaped valley carved out by the Credit River.

The Niagara Escarpment’s enormous hump, known as the Devil’s Pulpit, rose above the Forks of the Credit’s sheer cliffs. With the sun beaming down on the fresh green spring foliage, we soared over the dramatic landscape. I felt as if my piece of Caledon was all puffed up, preening itself for my benefit.

We radioed our approach to the runway and Jon brought the plane down with the soft touch of a professional, explaining as he did that not only was the landing the most difficult (and dangerous) part of flying, it was also the thing that often stood between new flyers and their private licence. “If a student has hit 20 hours of flying and still hasn’t gone solo, I bring in a senior instructor to work with them,” he told me, adding, “Of the students who fly solo, 90 per cent go on to get their private licence.”

After “dismounting” from the plane, I gave her a good pat, as if she were a horse and I was thanking her for a safe trip. When Jon asked me what I thought of my virgin flight, I replied, “When can we go again?”

The idea that flying is “in one’s blood” was oft repeated to me. Julie Pomeroy, the BFC’s general manager and an Alton resident, has logged over 6,000 hours in the pilot’s seat. She not only has her commercial licence, but can fly a float plane and for a time taught aerobatics. “I found flying inverted (upside down) difficult,” she told me, “because the instruments are backwards.” 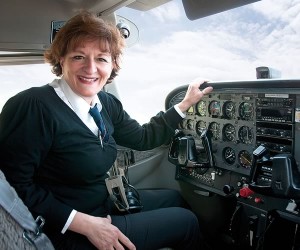 Brampton Flight Centre instructor Julie Marzoli, a former aerial investigator for the Ministry of the Environment, at the controls. Photo by Pete Paterson.

Like Julie Pomeroy, Inglewood resident Julie Marzoli picked up her love of flying from her father. “He flew combat planes over Africa in the Second World War.” An Air Canada flight attendant for 36 years, she retired and became a flight instructor at BFC.

Julie Marzoli says the most fun she ever had flying was the five years she spent volunteering for the Ontario Ministry of the Environment looking for polluters. She was at the controls for the aerial investigation of a company that dumped chemicals that contaminated Elmira, Ontario’s water supply. “I flew the whole mission. We were like 007 agents,” she recalled. Her work was featured in a mid-1990s movie called Angels in the Sky that documented what was, at the time, the longest jail sentence handed out for an environmental offence in the province.

Asked what they like about flying, pilots rave about freedom. “When I fly,” Julie Marzoli told me, “I forget all of my troubles.” And indeed there was something profoundly borderless about soaring over the landscape I know so well from the ground. Julie Pomeroy describes it as “three-dimensional freedom.” For me, it wasn’t so much the flying I liked, it was seeing the sights from such a different perspective.