Letters published in the WINTER 2012 edition of In The Hills magazine. 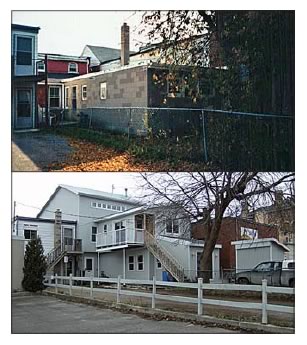 Before and after photos.

Enjoyed, somewhat, reading the articles “Living the High Life” and “Memories of Broadway” by Tony Reynolds in your autumn issue. I would like to make it clear, however, that real estate agent David Maguire does not occupy a fire-salvaged condominium, but rather an apartment that my late wife Ingrid Scott and I toiled seven years to create at 83 Broadway (the first phase), and later after her death in December 1999, five years on the last phase.

It was never a burnt-out hulk as the photo caption suggests. That was a different part of Broadway altogether. These are displeasing errors of lazy fact finding and reporting to me.

Ingrid, and those who remember her when she operated her business downstairs at 83 Broadway as Ingrid Interiors, was the driving force behind the creation of the apartment above. This all began circa 1991, long before Mr. Maguire became involved with “the condos on the north side.” Long before anyone else in the post-recession downtown “movement,” for that matter.

Half of Broadway was “boarded up” when we began in the mid to end of the 1989–93 recession (Gulf War/GDP decline/Mulroney defeat). It was our home, that apartment, in those early years before she died, and mine after, until Dave took it over as my tenant in 2008. Anyone who set up shop on Broadway after the year 2000 or so, I refer to as the “Rainbow” people. They are here after the storm (the ’90s decade). No boarded-up storefronts as there were when we began. No divisive Walmart debacle (1997). Vacancies are now filled rather quickly on the whole. The medians, amid some controversy, were a needed finishing touch.

The building at 83 Broadway, circa 1877, became known as the McNeilly building after Sam McNeilly bought it in 1947. He later built a concrete block addition at the back (now Nurtured Boutique) from where he operated a shoe repair business before he died in 1960. (Members of the McNeilly family still visit from time to time. They were raised in the building.) Next door at 85 Broadway was the Armstrong creamery (1930s to ’60s). It is now Broadway Convenience, Shoo Kat Shoe, Dr. Nails and, recently, Coriander Kitchen, an East Indian restaurant.

The store at 83 Broadway, where Ingrid operated Ingrid Interiors from 1992 to 1999, is now occupied by Genesis Space Creations, owned by Margo Young.

I still own 83 Broadway and have many great memories of the times when Ingrid and I lived there and the fun we had designing and building what it is today. And yes, everything about downtown living is true. Dave Maguire is a devout promoter of that lifestyle, lives it, and holds the torch high.

One final note about Broadway and the stormy ’90s, more specifically the Walmart invasion in 1997 and its ultimate success in locating where it is today. All Broadway was against Walmart coming to town, for obvious reasons. Michael Hill was the head of our BIA at the time and, although opposed by many, myself and Ingrid included, he initiated a deal to have the Walmart consortium sign into our BIA before allowing them in. In retrospect, Mr. Hill’s action was the right thing to do and contributed significantly to BIA funding and the success of downtown Broadway today. Thank you, Michael.

Editor’s note: We regret the error. It appeared in a photo caption written by the editor, not in the main story by Tony Reynolds. 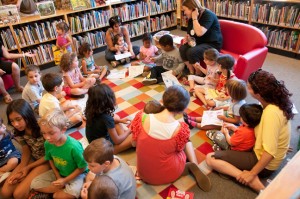 I want to congratulate you on publishing a first-class magazine with wonderful articles and photographs. However, I have a concern about an article in your recent edition. In the interest of full disclosure, you should have mentioned that the article “Your Public Library is Hot!” (autumn ’12) was written by a member of the Caledon Public Library board of directors, Ken Weber, and that his wife is a former employee of the Library. This information would have provided some much needed context for this self-congratulatory article.

Editor’s note: We should indeed have mentioned Ken Weber’s role as a library board volunteer. It has been seven years since his wife worked part-time for the library, and Ken resigned from the board during her term of employment.

The article about Caledon Public Library was outstanding and so inspiring. I have been a loyal fan of the In The Hills for many years and I feel honoured that the Library was featured so prominently. Then to have it written by Ken Weber, such a wonderful author and strong advocate of the library for so many years, was wonderful. Our staff believes strongly in the value of our organization and the services and resources we are able to offer the community, but to have it articulated so perfectly has instilled a renewed sense of pride in all of us.

An enormous thank you to all who work so hard to produce In The Hills. Each issue continues to surpass the previous one. It is a wonderful resource for people moving into the community, those who have always lived here, and those just passing through.

I especially appreciate the local history, emphasis on all the arts, promotion of environmental issues, and the focus on the many hard-working, talented people in this diverse community. There is never enough time to indulge in all the exciting activities and events you promote.

Your combined efforts make this lovely part of Ontario appear to be a wonderful place to locate. I have a too-substantial pile of back issues in my small condo, as I cannot bear to part with them and often pull one out for a reread or to flaunt to a visitor asking me why I made the choice to make the move to Orangeville.

Kudos to a splendid team.

Thank you for the wonderful articles “Presiding Spirit” and “Artist in Residence” featuring my home and work in the summer issue. The proof of the power of the press, and your magazine in particular, is in the numerous inquires and sales I have received as a result. I generally sell my artwork in the broader market south of the border, but this recent experience with In The Hills has opened my eyes and renewed my faith in our community. 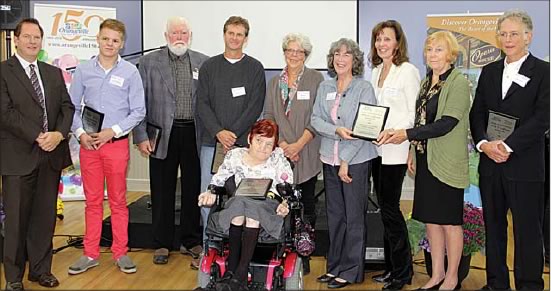 In The Hills received an Arts & Culture Award for Community Impact by a Business at the Mayor’s Breakfast for the Arts, held in Orangeville to celebrate Culture Days in late September. Pictured above with Mayor Rob Adams (left) are all the award recipients: Andrew Cleveland (Young Student Artist), Winston Uytenbogaart (Arts Advocate/Volunteer), Jim Menken (Established Artist), Signe Ball for In The Hills (Impact by a Business), Mary Runciman, Wendy Carter and Sharon Larson for Dufferin Youth Festival of the Arts (Cultural Event), Dana Harrold (Arts Educator), and seated front, Donna Reid for Click Connect Photography Group, Community Living Dufferin (Impact by an Organization).

If the first rule of journalism is to get the name right, then we fell far short of that in our autumn issue.

In “Living the High Life,” Brenda Gray’s first name was incorrect in the caption with the photo of her with her husband Nathan Hathaway.

Our sincere apologies to all concerned.