Doughnuts were brought to North America by Dutch settlers, and named for the walnuts or hazelnuts baked into the mostly uncooked centre. 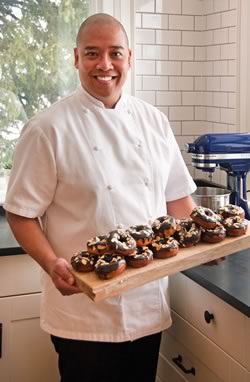 Caesar Guinto is the chef/owner at Creemore Kitchen is an expert doughnut maker. Photo by MK Lynde.

Almost everyone eats doughnuts. But few of us actually think of making them at home. Mostly we go into a doughnut shop, scan all the flavours offered, then choose our usual standby. If only you knew how simple and easy it is to make this timeless treat yourselves.

Doughnuts were brought to North America by Dutch settlers, and named for the walnuts or hazelnuts baked into the mostly uncooked centre. In 1847, an American ship’s captain solved the problem of the gooey middle by punching a hole in the ball of dough, thereby creating the first “ring” doughnut. Today, most countries in the world have their own delicious version of deep-fried dough.

I started making doughnuts when I had a summer job at an Italian bakery in Mississauga. They sold simple glazed yeast doughnuts fresh every day, and making, frying and glazing the doughnuts was part of my routine.

Later, when I trained as a pastry chef in college, I learned about beignets, a deep-fried French choux pastry dough. This is the same dough used in traditional éclairs, cream puffs and profiteroles.

After graduating from culinary school, I worked as a pastry chef at various fine dining establishments where I experimented with these doughs for my dessert menus. One of my favourite creations was sugared beignets accompanied by a chocolate coffee ganache in an espresso cup. I called it Coffee and Doughnuts.

Last summer The New Farm in Creemore asked me to take part in their annual Grow for The Stop fundraiser, a partnership between The New Farm and The Stop Community Food Centre in Toronto. Participating chefs were asked to use local, seasonal produce to create a signature dish. Knowing that most chefs shy away from preparing a dessert for these events, I decided to take the opportunity as a challenge and make an easy cake doughnut using fresh beets from Fiddle Foot Farm, a CSA (Community Supported Agriculture) farm near Mansfield.

The beet doughnut recipe is the result, except that instead of a traditional “ring” doughnut, which requires purchasing a professional doughnut dropper, I used an ice cream scoop to make a “Timbit”-style doughnut hole.

I have also provided step-by-step instructions for basic yeast doughnuts, plus suggestions for chocolate or lemon glazes and a lemon cream filling.

At Creemore Kitchen we plan to offer fresh doughnuts at least once a week (usually Saturdays), using local, seasonal ingredients. As much as I would like you to come and taste one of ours after reading this, I really hope you are inspired by the simplicity of making your own. 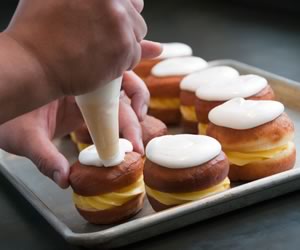 I started making doughnuts when I had a summer job at an Italian bakery in Mississauga.