“There was perfectly too much food,” says the bride.

Every Valentine’s Day Renae and Darren treated themselves to dinner at Chef Talk Bistro in Bolton where chef Fabrizio Natale had been wowing guests since 2005. “We were long-time lovers of his food,” says Renae. So she was more than a little dismayed when she learned the restaurant had closed early last year. But after a few calls, she discovered her favourite chef was still in the catering business.

Renae trusted Fabrizio so completely that she let him set the menu for the wedding. “‘I don’t care what you serve,’ I said. ‘This is my budget. Go for it.’”

“I received endless compliments on the food,” says Renae of the menu which began with an antipasto plate of prosciutto, melon, marinated vegetables, tomato bocconcini, salami and olives. The pasta was penne alla vodka, followed by chicken Marsala and seafood bouillabaisse, and finishing with a garden salad. Dessert was fresh fruit and, of course, the cake – lemon with a buttercream icing.

“There was perfectly too much food,” says the bride. 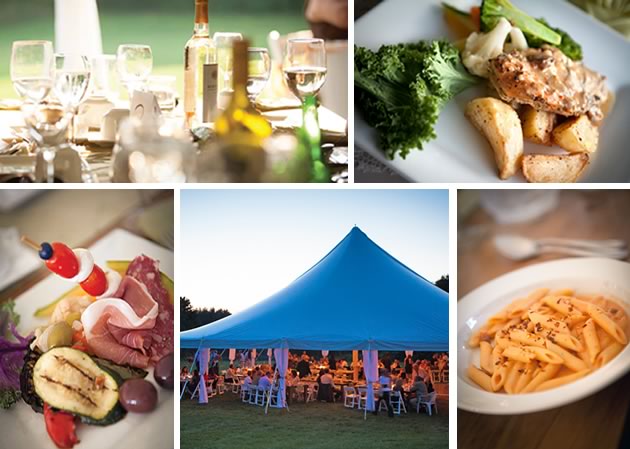 And although the day was as hot as anything Tuscany could deliver, guests stayed cool in the shade of a marquis surrounded by sweeping views of the Caledon countryside. Fresh Images Photography.