Nothing says spring like the tart taste of rhubarb.

Even though it is not a native plant, rhubarb is somehow evocative of traditional rural Ontario. The rhubarb patch and stewed rhubarb I remember on my grandparents’ farm and in their kitchen was one of the first edible delights of spring, appearing at least a month before anything else in the garden.

Although we tend to think of rhubarb as a fruit, it is actually a vegetable. It was brought to North America by European settlers who valued it for its medicinal properties, but was not used in cooking until the Caribbean sugar trade made it possible to sweeten the tart stems. Still, it fares just as well in savoury dishes as in pies and crumbles. A traditional Polish dish, for instance, pairs rhubarb with potatoes and mushrooms in a delicious gratin. The vegetable also works nicely with fish and meats, and can be added to soups and stews to impart a tart flavour.

Rhubarb season stretches from mid-May to early July. During that time you can find rhubarb at a number of farms and farmers’ markets in the Headwaters region. But it’s also available in winter at Lennox Farm near Shelburne, where owners Bill and Diane French harvest more than 250,000 pounds of rhubarb per year, with over 30 acres in production. From February to mid-May they also produce about 60,000 pounds of indoor rhubarb. Lennox Farm is one of only two indoor rhubarb producers in Ontario, and between the two of them they provide nearly all the province’s demand for indoor rhubarb. Now into their fifth generation on the farm, the French family has been growing rhubarb since 1883.

Bill grows a German Wine variety in his fields, which yields stalks that are redder, more tender and sweeter than the traditional English varieties of Sutton and Victoria that most likely grow in your backyard patch. Lennox’s indoor rhubarb is even sweeter still, although Bill is quick to point out, “When it comes to rhubarb, you don’t really say sweeter, you say less tart.”

Starting your own rhubarb patch is a worthwhile investment. It is a perennial, and a single plant could yield as much as 10 pounds annually for up to 10 years. Rhubarb root stocks are available at garden centres in the spring. Be prepared to wait two years before harvesting as the root systems need time to become properly established. And remember, never eat the leaves – they are toxic.

At the end of every rhubarb season, I make sure to pick up several bundles to put away for the off-season. Simply wash and chop the stalks, place on a cookie sheet, and freeze for at least two hours so the pieces freeze individually rather than in a big clump. Then place in airtight containers and back in the freezer. Easy as (rhubarb) pie!

Rhubarb has long been used to produce a tart, crisp wine. Try a local version: Downey’s Estate Winery Unfiltered Rhubarb Wine. Or for something sweeter, try their Strawberry-Rhubarb Wine. 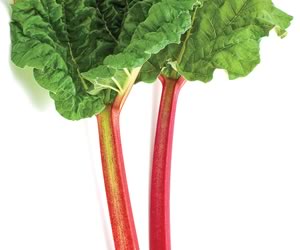 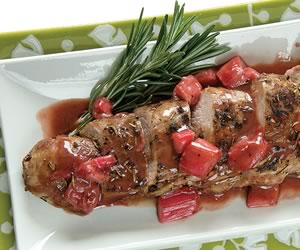 Although we tend to think of rhubarb as a fruit, it is actually a vegetable. 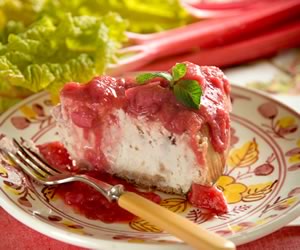 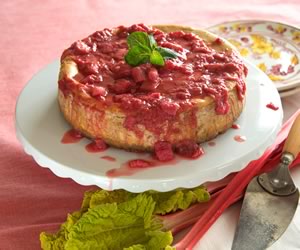 Yummy with pancakes, waffles, crepes, smoothies – you name it!