Sourcing local, sustainably raised chicken is a lot harder than it should be.

We crunch up a gravel driveway near Mono Mills where Donnyweir Poultry Farm sits tidily folded into the Niagara Escarpment, and spill out of the minivan to be greeted, to the delight of my preschool-aged children, by farm dogs and peacocks and a gaggling flock of orange-footed Aylesbury ducks.

Gerald Donnelly produces a capon out of the freezer in the garage, and two-dozen brown eggs from his mixture of heritage breed layers. The capon lived and ran about these hills alongside Donnelly’s New Hampshire and barred rock hens, scratching in the grass and eating bugs, and generally being a chicken for a good five-and-a-half months before making its way into the freezer. That’s 23 long weeks of exercise and sunshine to the conventional bird’s 8 to 14 in a cramped, dark barn.

Donnelly, who has been raising chickens for most of his 75 years, insists the slower growth imparts a flavour and texture most consumers today have never had the pleasure of tasting. “I’ve only had one customer in all these years who said they couldn’t eat it – it just tastes too much like chicken.”

As for those “non-tasty things” raised in long barns, he says, “I don’t care how many herbs you put on, it’s still not good meat. If the public found out there’s a real tasty bird that might be available, they’d never sell any of that crap.”

We are on the road hunting for such tasty things, my family and I, because these chickens will not – legally cannot – come to us, or a store near us, or even a farmers’ market. 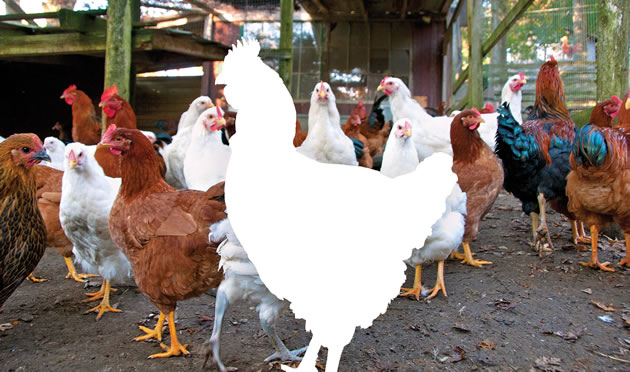 All around Headwaters region small producers are raising happy birds that taste better than anything you’ll ever buy in a supermarket. Photo by Pete Paterson.

Chicken production, like milk, is a supply-managed commodity, a quota system managed by the Chicken Farmers of Ontario. Started in the 1970s to ensure price stability for farmers, somewhere along the way the system began to favour large-scale, established producers. With few exceptions, farmers who want to raise chickens must buy a minimum quota equivalent to about 90,000 birds a year – an expensive initiation that makes the enterprise industrial scale from the get-go. There are only 1,000 commercial chicken farms in Ontario producing an average of 200,000 birds a year each – 30,000-plus at a time, over and over again.

But there is a loophole. Since 2007 the CFO has allowed anyone to raise up to 300 chickens a year without quota. However, the birds can only be sold from the farm gate – not through any store or farmers’ market – and they can’t be advertised. (Similar arcane rules govern the sale of eggs, which is why I seize the chance to pick up fresh ones from Donnelly.) Nearly 10,000 people in Ontario take advantage of this small flock exemption to raise about 700,000 chickens a year, a mere blip in the industry’s 200 million, but enough to provide an alternative for consumers willing to seek them out.

Through word of mouth and the Eat Local Caledon website, I quickly find several farmers who will sell me whole chickens for $3.50 to $5 a pound, well below grocery store prices for “naturally raised” or organic chicken.

None are certified organic, but some could be. Their methods could be billed as permaculture or biodynamic, “beyond organic” or just plain old school. Some, like Jamie Richards of Hockley Valley’s Am Braigh Farm and Amy Ouchterlony and Graham Corbett of Fiddle Foot Farm in Mulmur, supplement vegetable businesses with chickens raised in movable coops or “chicken tractors.” These “pastured chickens” are always rotating onto fresh grass and get 20 to 30 per cent of their diet from plants and bugs.

There is decent chicken to be found in stores – for a price – depending what you’re looking for. Broadway Farm’s Market and Heatherlea Farm Market in Caledon source their birds fresh and direct from local quota farmers they’ve met. Heatherlea proprietor Pat McArthur ensures the chickens they sell have been raised free range, without antibiotics or animal byproducts, and with high-quality feed including flax for omega-3s. Like Donnelly, McArthur selects slower growing chickens and says hers are “a different product altogether” compared to grocery store birds.

Harmony Whole Foods in Orangeville recently decided to sell only organic chicken, with certification that ensures certain nutrition and living standards are met – organic birds require more space and light, as well as outdoor access. Prices range from about $5.50 to over $8 a pound.

Similarly the Creemore 100 Mile Store buys chicken from Wellington County Mennonite farms that co-owner Jackie Durnford deems to be on the “smaller end of large.” It’s the next best thing to what she would really like to sell but can’t, birds raised very locally in a fashion that can’t be summed up by any grocery store label.

“The ones that I want to buy are from really small farms,” says Durnford. “There’s no overcrowding, there’s no bad conditions. It’s a lower volume. To me, it’s more in tune ecologically. You can go to the end of the farmer’s driveway and buy it from them and that’s legal, but they can’t sell it here. It’s exactly the same chicken. It’s ridiculous.”

Since 2004 farming organizations have continually lobbied the CFO to increase the small flock exemption from 300 to 2,000, and to slacken marketing and sales restrictions. Most other provinces allow this – in Nova Scotia, for example, farmers can raise up to 10,000 birds without quota; in Saskatchewan, 4,000.

Repeatedly the CFO has declined, most recently in a decision handed down to the Practical Farmers of Ontario in January. PFO president Sean McGivern vows to appeal to a government tribunal, so stay tuned. (Visit www.flockingoptions.ca for more information.)

Foodies hastily slam supply management for its failure to respond to slow-food trends. Globe and Mail writer Mark Schatzker, who buys chicken from Gerald Donnelly, calls supply management “the enemy of deliciousness.” But according to National Farmers Union – Ontario president John Sutherland, the system just needs to be reformed to fit its original purpose – to “give the best chance to the most farmers.”

Changing the rules to allow farmers to raise more chickens outside the quota system and market them through local stores and farmers’ markets would be good not only for small-farm incomes, but also for consumers’ access to local food. It’s unsustainable for everyone to have to drive to a farm to buy a chicken, or to raise their own – where it’s actually permitted, that is.

But if the CFO’s current tight rules have a bright side, it’s that they encourage consumers like me to seek out farmers firsthand – and their stories hold more power to change the way we eat than any grocery store label. I now think of free-range Ontario chicken as a seasonal product, hatched in spring and ready for market in summer and fall.

“I like to encourage people not to think of chicken as something they need to eat as often as they do,” says Ouchterlony, pointing out that chickens are less efficient feed converters than her farm’s pigs and cows. “Unfortunately in our industrial system, it has ended up being really cheap. Well-raised chicken should be more expensive. Our ideal customer might get five or ten and keep them in the freezer.”

From now on, that’s the kind of customer I want to be.

We leave Donnelly’s farm with mud on our boots and the kids tickling our necks with fistfuls of peacock feathers. Three days later we roast the capon and watch it disappear. My finicky four-year-old surprises us by demanding “chicken on the bone” and picking the wings clean. The bird is as richly textured and flavourful as Donnelly promised, but we knew we’d be going back for more even before we left the farm.

Some of the places (at least the ones we know about) where you can buy farmgate chicken in the Headwaters region.