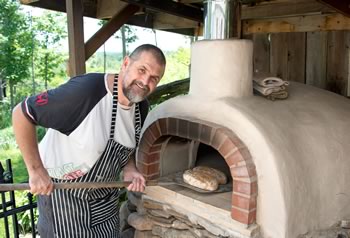 Baker Matthew Flett built his wood-fired oven himself from a kit.Photo by Pete Paterson.

Each week Matthew Flett pulls 90 loaves of sourdough, 30 slabs of focaccia, numerous loaves of batard and dozens of his infamous dirt bomb doughnuts from his outdoor wood-fired oven to sell at Creemore’s Saturday farmers’ market. The Mulmur resident says he loves cooking outdoors. For him, baking is always a primal experience, but in the open air the experience is even more intense.

“You’re not in a little cave, there’s no real technology. It’s just you and the fire,” says Matthew. “This is the way it used to be.”

Outdoor bake ovens, once a mainstay of pioneer life, are gaining popularity among rural home cooks and professional bakers alike, who have discovered that preparing food in an outdoor oven can be a fascinating and rewarding experience, as well as a challenging one.

Matthew built his first oven, called a cob oven for the adobe-like mortar used to make it, with materials sourced from his property – mainly river clay, straw and sand. But after two years of intensive use, he realized he needed an upgrade. He built his next oven from a Forno Bravo kit, which uses high grade insulation and fire-proof bricks. He covered the entire surface with an acrylic coating called Jewel Stone, and had his partner Ali add artistic embellishments such as a ceramic gecko scurrying away from the oven door. This oven is still working well, and Matthew is already dreaming of a sister oven to stand beside it.

“The popularity of outdoor ovens is really gaining momentum,” says Alex Chernov, owner of StoveMaster, an Orangeville company that specializes in building masonry heaters. He says outdoor bake ovens now make up about half his business. He attributes the growing trend to the slow food movement, and to an age-old human fascination with fire. “People are looking into the preparation of food that takes more time and is more thoughtful,” says Alex. “They are looking at more natural ways of cooking.”

Nothing says loving like something from the oven, especially when it’s out of doors.

Lavender residents Anna Hobbs and Byron Beeler built their outdoor cob oven themselves two years ago with the help of a few friends, neighbours and some unconventional building materials, like the dog food can inserted at the back of the oven to act as a vent. Despite such homespun elements the oven’s ornate iron door, sourced from Quebec City, elevates its simple design.

“If anything, it’s a conversation piece,” says Byron. 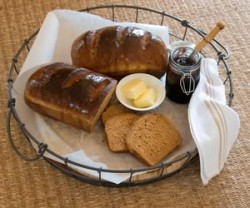 Now the couple enjoys nothing more than debating whose recipe for Nova Scotia brown bread tastes best when pulled from their outdoor oven. They each had different recipes for the traditional bread when they married. And both have been rigorously tested in the Quebec-style outdoor oven. Anna included them in a family cookbook she recently wrote for their five children and six grandchildren.

The outdoor oven, like their brown bread, has become a family tradition. Byron has always loved baking bread with his daughters, and now they get to share this experience outdoors perched at the top of Lavender Hill with endless rolling hills as their backdrop.

Alan Hibben, another Mulmur culinary enthusiast, was inspired to build an outdoor oven after taking a cooking course during a trip to Italy. “It’s been a learning experience,” he says.

“I’ve had more than my share of disasters. It’s a matter of trial and error,” he says of his outdoor brick oven, which he had custom built by StoveMaster outside the back door of his Mulmur Township weekend retreat. “I usually take a good-sized bottle of wine outside. You do need a fair amount of lubrication for the process.”

For Alan the challenge is cooking everything evenly. Unlike a barbeque or open fire, an outdoor oven doesn’t cook with actual flame, it uses the retained heat from a long burning fire.

“I’m constantly moving things from back to front and from side to side. It’s a lot of real time input,” says Alan. “It’s a complicated system, but when the food comes out people say, ‘Oh, my god!’ ”

Steaks are his favourite preparation, and he claims they taste just the way they do in Tuscany, where high-temperature cooking means medium-rare steaks have a perfectly seared crust. 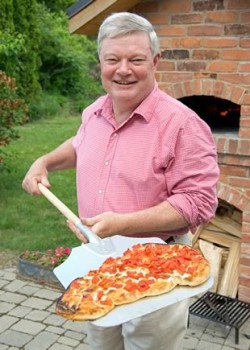 Alan Hibben bakes his pizza at a searing 650ºF. Photo by Pete Paterson.

“The interesting thing with the steaks is the temperature is dramatically different just three inches off the hearth where the grill sits,” he says as he places his steaks on a grill and then into the oven. But once he finds that sweet spot the steaks are cooked in a matter of minutes.

Cooking in an outdoor oven is a very personal experience. Each oven is as different as the cook who prepares its fire. As Matthew Flett says, “You have to build a relationship with your oven.”

Once an oven is demystified, seasoned cooks take advantage of the varying stages of heat by cooking different things at different times, all from one firing. Pizzas are cooked on the hearth in a 650°F oven. High heat is great for searing meats, large roasts or browning vegetables. Breads, smaller roasts and casseroles come next as the oven temperature gradually drops. Sweet desserts, cookies and granola work well with lower heats. The dying heat of the oven can also be used for baked beans left in overnight or for dehydrating the season’s bounty of fruits, herbs and vegetables.

During market months Matthew lights his fire on Thursday nights. After five hours of burning he jams the door closed, leaving the coals to rest overnight. Two or three hours before he is ready to bake, he shovels out the coals. His oven is ready when the temperature drops to 500ºF. This is the ultimate in slow food, when it takes all night for the oven to reach the perfect heat. “It’s way out of whack but it’s all a part of it,” he says. “To make a 90-second pizza takes five hours.”

As for the cost of building an outdoor oven, that depends on the type you choose and how much of the work you do yourself.

It might seem difficult to justify all that sweat and expense for an oven that only gets fired up a handful of times a year, but the rewards are priceless, worth more than a loaf of bread or perfectly seared steak. Cooking outdoors is an experience that connects us to our food, and to one another. 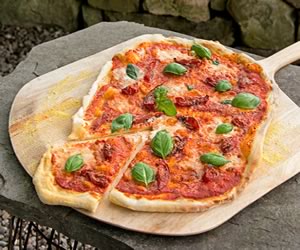 This classic pizza tastes even better when it’s pulled crisp and sizzling from a wood-fired oven.