Minimalism and material comfort come together in a transcendent country kitchen.

Norman Wolfson and his artist wife Sandi Wong like to describe their nine-year-old weekend getaway perched high on a ridge on the western edge of Mulmur as “an Asian cowboy house.” When they told local architect Jamie Pearson that was what they wanted, he admitted the request was a first for him, says Sandi. “But he pulled it off.”

And indeed, the 3,000-square-foot is home is both rustic and zen, a tip of the hat to its rural setting and to Sandi’s Eastern roots. The open concept design contains the kitchen, dining and living areas in one seamless, airy space that is emphatically modernist yet warm and inviting too. This yin and yang is echoed in the way the sleek countertops, in understated honed slate, contrast with the reclaimed hemlock floors taken from a local barn, their provenance still visible in the square nail holes and worm tracings. 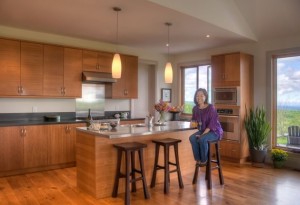 A trio of Shinto temple-inspired stools sidles up to a gleaming stainless steel island. Cherry kitchen cabinets, nearly devoid of detail, provide a serene backdrop that almost seems to disappear. This absence of adornment is deliberate. “Because the house is open concept, we wanted the kitchen to be as uncluttered as possible,” says Sandi.

The expansive sliding doors leading onto the deck are reminiscent of Japanese shoji screens. The wide overhanging eaves covering a wooden walkway flanking the courtyard garden give the impression of a Buddhist monastery. But views over the rolling forests and fields of the Headwaters countryside are emphatically native.

Back inside, the simple construction of the dining room table, fashioned from an immense ash beam by local woodworker Steve Vipond, and stained almost black, is offset by the pleasing curves of black Gunther Lambert wooden chairs. The overhead light is a classic 1940s George Nelson bubble lamp.

Both Norm and Sandi are enthusiastic home cooks and entertain frequently on weekends. “This is a great entertaining house,” says Norm. “We progress through the house. Everyone congregates in the kitchen at first. Then onto the deck for cocktails. We move to the dining area to eat and end up in the living room in front of the fireplace for dessert.”

On this particular Sunday afternoon, Norm is preparing one of his signature dishes, a mushroom-roasted-red-pepper risotto. “I love making risotto,” he says, “because it’s so meditative. I find all that stirring very calming.”

Meanwhile, Sandi pulls a tray of roasted pears from the wall oven to the right of the kitchen island. “Look,” she says clearly delighted. “They’re perfect.” And they are, caramelized around the edges and redolent of the ginger marmalade she has been basting them with at regular intervals. This is the first time she has prepared this dessert, a concept she invented that involves, in addition to the roasted pears, homemade ginger cookies and ginger ice cream. “I’m calling it Ginger Heaven,” she says.

As their guest sits down to enjoy this unexpected feast on a summer afternoon, a cool and soothing breeze wafts through the wide open doors from west to east and back again.