Crème brûlée is usually served in individual ramekins, but it also presents beautifully in a single nine-inch round ovenproof dish. 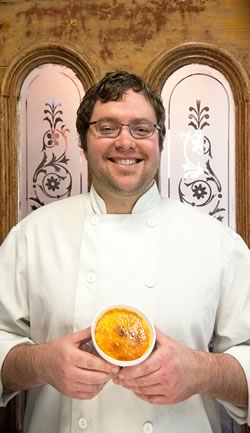 There is something irresistible about cracking through the browned and brittle glaze of a perfectly caramelized crème brûlée. All at once you are a child again, shattering that skiff of ice on a frozen puddle. But here, the payoff – the velvety unctuousness of rich vanilla cream – is very grown up indeed.

It is this startling contrast between crisp and creamy that makes crème brûlée, or “burnt cream” as English undergraduates still call it, such a perennial favourite. Despite its Gallic name, crème brûlée is actually a traditional English dessert, said to have originated at Trinity College Cambridge in the late 1600s. It still appears frequently on College menus.

Given crème brûlée’s lengthy British lineage, we asked Patrick Venables, chef at Terra Nova Public House, to show us how to prepare this elegant classic. The restaurant, situated in the Pine River Valley at the base of the Niagara Escarpment, has become a gathering place for local gastronomes and hungry hikers since it opened in 2011. Everything about the place is local. Owner Anna Alonso says 90 per cent of the Public House’s clientele are regulars. “We have people coming in who have beer mugs here with their names on them,” she says.

In best English pub tradition, the Public House serves hearty, home-cooked meals prepared as much as possible with locally sourced products. The menu changes daily to reflect the seasonal bounty. Even the chef is homegrown. Patrick did his training in Vancouver, but was raised in Hockley Valley, and worked as executive chef at Devil’s Pulpit Golf Club in Caledon and at Orangeville’s One99 before arriving in Terra Nova late last year.

“Upscale pub fare” is how Anna describes the food at the Public House. “There is something for everyone, whether you drop in for wings and a beer, or braised lamb shanks and a nice bottle of wine.” And ever since it opened, the restaurant has featured crème brûlée on its menu.

We asked Patrick to put a seasonal spin on this recipe by adding raspberries and infusing the cream with lavender, both of which are plentiful for much of the summer. Be sure to use lavender flowers (fresh or dried) that have not been sprayed. Your own garden or a neighbour’s are probably the best sources. Simply simmer the lavender in the cream for five minutes, then strain.

Good vanilla is also a must. Patrick uses pure vanilla extract, but the ne plus ultra is the bean itself. Just split the pod lengthwise with a sharp knife and scrape the seeds into the cream along with the lavender

Opinions differ on whether the dessert should be served hot or cold. It is important to chill the cream for at least four hours before sprinkling on the sugar and torching. The cold cream allows the shell to harden quickly. Serve immediately, or if you prefer, wait until it comes to room temperature.

Crème brûlée is usually served in individual ramekins, but it also presents beautifully in a single nine-inch round ovenproof dish. Some people are intimidated by the final step. You will need a blowtorch for this. Patrick uses a large propane-fuelled device, but smaller butane torches are available at most hardware or kitchen stores.

“This is always an impressive dessert to serve at a dinner party,” says Patrick. He recommends doing the final caramelizing right at the table. “It always makes for great conversation when you pull out the blowtorch.” 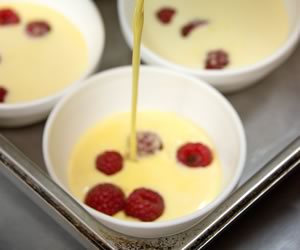