Two Caledon women are among those transforming Canada into a dragon boating powerhouse. 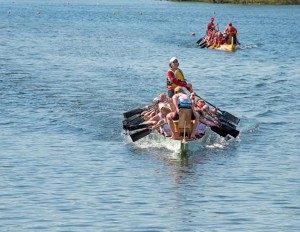 The Outer Harbour team put their hearts into the race for the finish line. Photo by Pete Paterson.

Dragon boat racing? In hockey-mad Canada? Surely the CBC report was a mistake. If you think so, you would be right. Canadian crews did not win 30 gold medals – they actually came away with 42, as well as 14 silver and 8 bronze. Total medal haul? Sixty-four, nearly four times that of China.

What may be most surprising is that this achievement was no fluke. No one involved in the sport was surprised by Canada’s dominance. This country already had a well-deserved reputation as a dragon boating powerhouse, topping the overall gold medal count at the World Championships in 2003, 2007, 2009 and 2011. And although Canada did not capture the 2013 Nations Cup, awarded to the country that tops the standings in premier classes, Canadian teams placed second. Only China and Canada have captured this honour three times.

Yet dragon boating doesn’t even make the list of the top ten sports in which Canadians older than 15 compete. According to Statistics Canada, golf is the most popular, followed by ice hockey, soccer, baseball, volleyball, basketball, downhill skiing, cycling, swimming and badminton.

A variety of factors have come together to transform Canada into a perennial threat in the dragon-boating world, says Chloe Greenhalgh, executive director of Dragon Boat Canada. “Dragon boat racing came to Canada at Expo ’86 in Vancouver, when the Chinese brought over six boats, and caught on with corporate Canada almost immediately,” she says.

Canadian corporations saw dragon boating’s potential for team-building exercises. “Anyone can paddle a dragon boat,” explains Greenhalgh, and this country became an early adopter because the sport attracted deep-pocketed participants who were willing to help build the sport’s infrastructure. Add Canada’s healthy supply of skilled paddlers, and the thousands of lakes and rivers that dot the landscape, and the country’s haul of gold is not as surprising. “And now, we have excellent coaches as well,” Greenhalgh adds.

Many centuries before Québécois fur-trading voyageurs began paddling their way along Canadian waterways in enormous canoes, the Chinese were in their dragon boats. In fact, they have raced these long, narrow, flat-bottomed vessels without letup for more than 2,000 years. The practice dates back to the same period as the ancient Olympic Games in Greece.

Dragon boat racing is part of China’s annual Duanwu Jie, or Dragon Boat Festival, which takes place around the time of the summer solstice, when the sun – the dragons – are said to be most potent. Unlike Canada’s worthy-of-slaying, den-dwelling dragons, such as Kevin O’Leary, China’s mythical dragon is largely benevolent. With the head of an ox, the antlers of a deer, the mane of a horse, the scales and body of a snake, the claws of an eagle and the tail of a fish, the Chinese dragon takes to the air and is closely associated with weather, particularly water-related events such as rain, hurricanes and floods.

Today, some 50 million Chinese take part in the ritualistic sport of dragon boating. In Canada the number of participants is considerably lower – an estimated 85,000, according to Dragon Boat Canada. Among the Canadians is a pair of paddlers from Caledon: Anne Cooper-Worsnop, who has called Inglewood home for the last three years, and Cheryl Innis, who grew up in Palgrave and married into one of Caledon’s original farming families.

Both Cooper-Worsnop and Innis came to the sport later in life and paddled recreationally before intensifying their involvement. As is the case for many women, Innis got involved after being diagnosed with breast cancer. 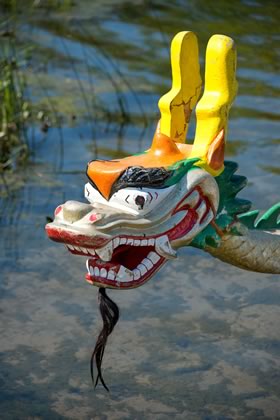 In the minds of many Canadians, dragon boats and breast cancer are strongly linked. This association came about because of the work of Don McKenzie, a Vancouver medical doctor, researcher and avid paddler. During the 1990s, McKenzie used dragon boat racing to test his once-controversial theory that strenuous exercise could reduce the incidence of lymphedema, a debilitating condition that can result from breast cancer treatment. When McKenzie’s three-month study ended, the 24 cancer survivors who took part were not only lymphedema-free, but also “fitter, healthier and happier,” according to the International Breast Cancer Paddlers’ Commission.

The women kept the team going, called it Abreast In A Boat, and invited other cancer survivors to participate. And so began what has become an international movement. There are about 50 breast cancer teams in Canada and about 150 teams worldwide, says Eleanor Nielsen of the Paddlers’ Commission.

A breast cancer survivor herself, Nielsen started Dragons Abreast, a Toronto-based team. Since she started the crew in 1997, more than 40 of its members have died. “It has been hard,” she says, “but it is a reminder to all of us to live life for the day and be there for each other.”

Innis has also experienced the grief of losing team members who had become friends. “One year, five members of my team died,” she says. “They were people who had gone on the same journey as I had, and they didn’t make it.”

With a broad swath of her blond hair highlighted in pink and purple to denote her battle with breast cancer, Innis says the sport helps her cope with the losses. “I just pound it out. Dragon boating is a complete escape. When I’m in the boat, I only think about paddling. I don’t, I can’t, deal with anything else.”

And to offset the lows, there are also highs. Like Cooper-Worsnop, Innis will compete in Ravenna this September, a prospect that buoys her spirits. When the competition is over, she and her husband will stay on in Italy and enjoy a holiday.

But dragon boating enthusiasts aren’t limited to cancer survivors. People engage in the sport for many reasons. “I do it for the love of being on the water,” says Cooper-Worsnop. “I’m a total outdoors person. I love the cross-training and love the camaraderie of being on a team.”

Cooper-Worsnop was so taken by the sport that, like Innis, she decided recreational paddling wasn’t enough. She wanted to be competitive, so two years ago she tried out for the Port Credit-based Outer Harbour Senior Women’s A team for those over 40. Dragon boating includes various classes. There are, for example, Senior A, B and C teams for women and for mixed crews older than 40, 50 and 60, as well as open classes usually made up of men, though women may also join.

Not your average 48-year-old, Cooper-Worsnop did much more than just make the team. In early September this year, she will participate in her second international event when she heads to the Club Crew World Championships in Ravenna, Italy. The biennial event for club-level teams is organized by the International Dragon Boat Federation and alternates with the World Championships for national teams.

Cooper-Worsnop’s chances of coming home with at least one gold medal are high. At her first Club Crew World Championships in Hong Kong two years ago, her team was second only to Montreal’s Senior A team.

The Outer Harbour crew, made up of 20 paddlers, a drummer and a steer, who steers the boat with a long oar, are a hard-working bunch. Their coach gets them on the water for five hours a week at 5:45 a.m., with warmups starting even earlier. “The morning sunrise is always a pleasure,” Cooper-Worsnop says. 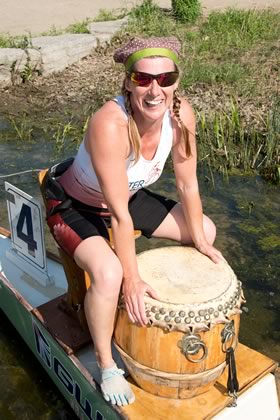 Team member Anne Cooper-Worsnop at the drummer’s post in the bow of the boat. Photo by Pete Paterson.

Team members are also expected to improve their fitness and strength by completing various exercises, such as a six-kilometre run or a 1,250-metre sprint followed by another sprint of 750 metres. Several times a season, their coach assesses the paddlers’ progress by scheduling tests that include a weigh-in and two minutes of bench presses and bench pulls, as well as pull-ups. In the allotted two minutes, Cooper-Worsnop can do an unbelievable 15 full pull-ups, a more difficult version of a chin-up. No wonder she lost 30 pounds in her first four months on the team.

Innis paddles for a Senior Women’s B crew whose members are older than 50. Three times a week she makes the long drive from Caledon East to Pickering where the crew trains. In-between, she trains twice with a personal trainer, fits in a couple of Pilates classes, works on her strength and flexibility, and pitches in on the farm.

When I tried my hand in Cooper-Worsnop’s dragon boat, I was completely engaged in keeping time with the paddler in front, and ensuring my paddle stabbed the water correctly and my torso rotation generated power and a nice clean finish. With ten pairs of forward-facing paddlers who sit side by side powering the 12-metre-long boat, it surged ahead with each stroke.

Under a coach’s watchful eye, everyone had her head down, concentrating hard and willing their fatiguing muscles to go the distance as the hour-long practice wore on. All the women had Ravenna, Italy, on their minds, and so did I. I couldn’t help but wonder if I’d found the sport at which I could become competent enough to achieve my lifelong goal of representing Canada internationally. Dragon boating is that accessible.

Cooper-Worsnop’s Outer Harbour team has achieved its best results in the 500-metre race, a sprint that is over in about two minutes. The crew’s next best distance is the gruelling 2,000-metre marathon, which differs from rowing races because the boats complete the same 500-metre course four times. This means the crew must turn their long craft three times, a manoeuvre requiring considerable finesse. For the spectators cheering from the shoreline, the spectacle is dramatic.

In an article in the National Post, Brendon Larson made the case that the non-native Norway maple depicted on the new $20 bills might better represent multicultural 21st-century Canada than the iconic, native sugar maple. Despite this country’s recent Olympic successes in hockey and because the 2015 World Dragon Boat Nations Championships will be held in Welland, Ontario, perhaps Canada should have replaced the hockey scene on our old $5 bills with dragon boats rather than the now-mothballed Canadarm. 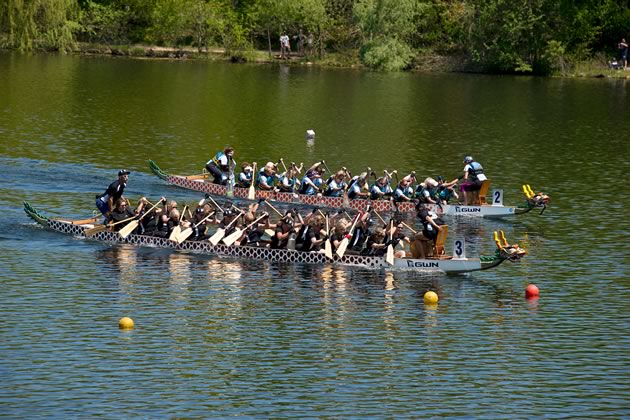 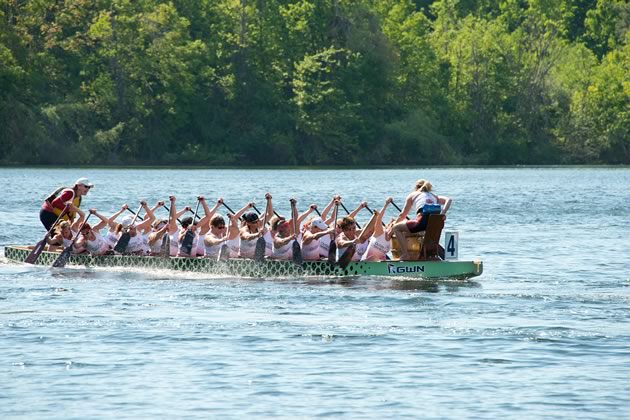 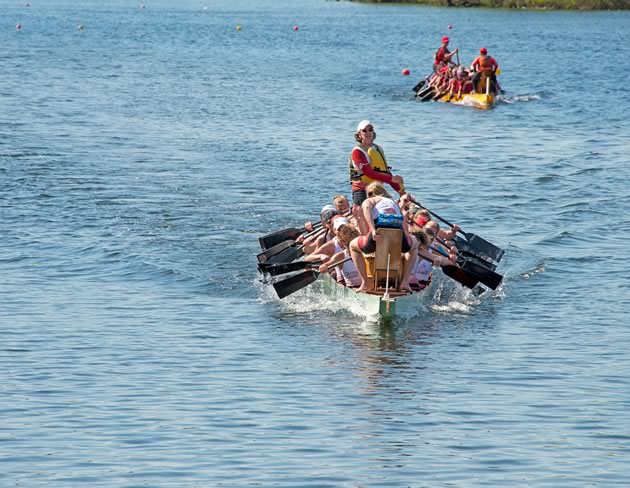 To find a dragon boat team, go to the Dragon Boat Canada website, dragonboat.ca, which includes a list of teams.

To see the sport in action, take in the Canadian Dragon Boat Championships from July 4 to 6 at the Welland International Flatwater Centre, where crews will warm up for next year’s World Dragon Boat Racing Championships. The international event will be held on the Welland course. Billed as one of the best race courses in the Americas, it will host the 2015 Pan Am/Parapan Am canoeing and kayaking sprints.