I am lucky to say that most of the scars on my body are tiny. Each one tells a story, though.

People often assume the roughly circular scar on my forehead is from chicken pox. But they’re wrong. The scar came as a result of a fall off a bike when I was about seven years old. ‎I was challenged to a race against my brother and two family friends, Brent and Matt. They would be on foot, I would be on my sparkly banana-seated bike. Whoever made it from the barn down the gravel driveway to the house first could claim bragging rights for the rest of the visit.

You can imagine my delight and fear as I pedalled harder and faster than ever before, gaining ground on the three boys. I’m sure I was grinning ear to ear as I took the lead… just before one of them reached out, grabbed the back of my banana seat to slow me down, and sent me into a terrific speed wobble that ended with me head first into the gravel driveway.

My mother picked me up at the door – with stones stuck in my face and blood everywhere. I remember it dripping onto the wooden floor, the crimson polka dots trailing us as we headed to the bathroom to clean up. She gently picked out the stones, ‎one by one, until they were gone, including the large one that stuck in my forehead, leaving its mark behind.

Thirty-plus years later, the scar has largely filled in and faded. My competitive nature, on the other hand, has not. I remind those involved that they robbed me of my banana-seated win, that I was clearly coming in first when I was taken down! We laugh and remember the grand but creepy old farmhouse, the picnic lunch that carried on that day despite our ruckus.

My son recently asked for an inventory of my scars. How did you get that scar on your forehead, Mom? Do you have scars on your knees? Have you broken a bone before, Mom?

I am lucky to say that most of the scars on my body are tiny. Each one tells a story, though. There’s the one from the time the family’s Russian wolfhound bit my face when I pulled her off the black leather couch, trying to help my mom keep the dog “Off the couch!” There is a little circular pock mark on my shin, left behind when a small lump was removed and tested. And there’s the lopsided smile of a caesarian scar on my lower abdomen. (Adrian doesn’t want to hear about that one now that he’s a preteen, as long and significant as it might be.) 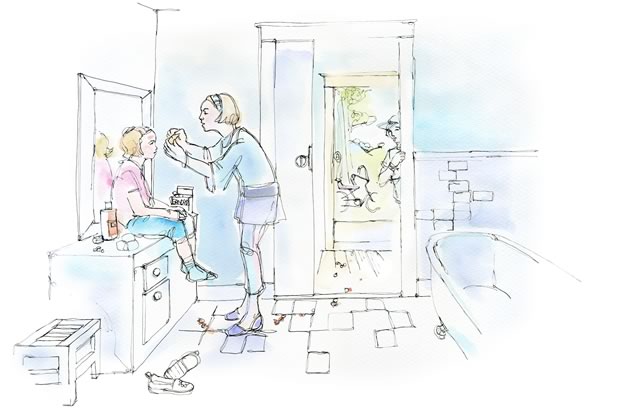 My mother picked me up at the door – with stones stuck in my face and blood everywhere. Illustration by Shelagh Armstrong.

My son is largely untouched by scars. He laments his lack of healed injuries and broken bones. He wants to be cool and have survived his nine years. Luckily, he hasn’t been injured enough to cause such bodily havoc. A few scratches and scrapes have healed nicely, and his knees have not quite turned to the hamburger more typical of active childhoods.

I asked him why. Why does he seem to want cuts and scratches and pieces taken from his beautifully untouched skin? (I don’t put it that way – I’m more likely to scoff.) But what other tales do we have at that age to distinguish us? “I had a birthday party” or “ I went on a plane to Florida”? A scar tells much more. It relates the drama behind how we came to be where and who we are today.

When we want to know someone well, we ask about their scars. They are an opening to a personal story, an easy way to go to a specific memory of place and time. The pain and the aftermath often denote a time of transition, healing, growth or a forced change in behaviour.

We trace our lover’s scars, telling them we care with our fingers, and wishing we had known them when. We ask for the stories after just the right amount of time, and until then, we speculate, building an inventory of questions we want answered. We learn the stories behind the visible scars, and sometimes, in just the right moment, we learn about the invisible ones as well, the ones that heal less readily, and are often more snarly and complicated than those on the surface.

“Do you have any scars?” our children ask each other. They proudly show them off as badges of honour. As for us, we pray the scars that take away our children’s perfection will serve instead to enhance their humanity, leaving more visible than invisible damage.

Just as the weather is heating up, towns across our region are officially celebrating Recreation Month. That means families have a chance to try out new programs in our community facilities, in our parks and on our trails. Local newspapers carry advertisements for these programs, some of which are free – a great way to keep active in June and beyond.

Sounds Fishy to Me

A two-day catch-and-release fishing tournament, the Sixth Annual Friends of Island Lake Bass Fishing Tournament, is set to take place July 5 and 6. The weekend promises excitement, anticipation, surprises and, of course, patience waiting for a fish to take the bait. Plus, while you have fun with the kids, you’re contributing to a good cause – all proceeds from this fundraiser go toward trail development at Island Lake Conservation Area. Special registration rates for children ages 5 to 11. Boat rentals available. We’ve heard it’s wise to book early. cvcfoundation.ca/events/

The Creemore Children’s Festival was formed with a desire to keep children young, energetic and wide eyed for as long as possible. By enlisting the talents of local artists and family enthusiasts, the festival continues to offer families  a unique, creative and thoughtful day of activities, including live shows on the main stage every hour, demos and workshops. It all takes place August 2, 9 am to 5 pm, on Mill Street in Creemore. creemorechildrensfestival.com

The Town of Mono and Headwaters Communities in Action will host a CANBIKE Safe Cycling Festival on August 10, from 9 am to 1 pm. Youngsters will learn how to main- tain their bike as well as how to ride it safely on the road – advice that will last well beyond the summer. The festival is led by certified CANBIKE instructors and held at Monora Park – an excellent place to hit the trails on your bike afterward. Monora Park is accessed off Highway 10, just north of Orangeville. headwaterscommunities.org

Zoom in on PAMA!

We continue to be impressed with the programs offered at PAMA – Peel Art Gallery, Museum & Archives. It’s a place where children can explore their artistic talents and learn about the value of Peel’s history and heritage. Activities for kids include workshops, programs and summer day camps suitable for children ages 6 to 12. This year the camps include photography, up- cycling and First Nations’ beading and textiles. pama.peelregion.ca

Our summer camp listings are online at kidsinthehills.ca. Whether for your first-time day camper or your experienced overnighter, there are plenty of camps to choose from. Camps can be an enriching experience for kids during the long months of summer, and a super way to make new friends outside of school. A full listing of summer activities is available. It’s your go-to place to plan your summer fun.

I hope you are enjoying these long summer days with your loved ones.  —Bethany